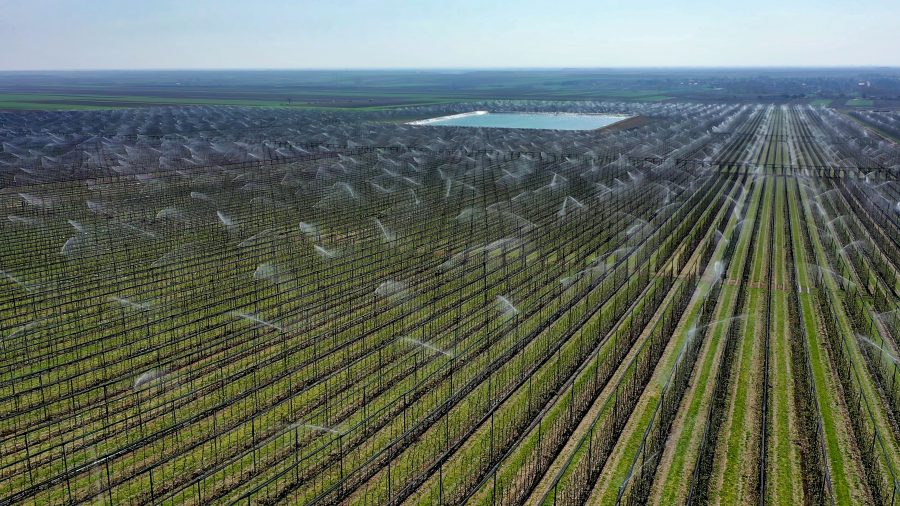 The British trade press has shared several excellent articles on the brown marmorated stink bug, but thankfully almost the entire population of the UK has never met one. You don’t want to, frankly. When they arrive en-masse they are loud, they are invasive and extremely hard to deal with – I remember one report from Italy included a description of how mowers were being broken because the mass of bugs and their sticky excretions were breaking drive shafts.

They still don’t have a predator; there are no natural controls and no chemical ones either. Only a barrier between the bugs and the fruit will prevent massive issues.

In Serbia last week, I met lots of shied bugs, of both colours. I was visiting the Agrounija farm in Indija to have a look at their orchards and new storage complex. As we stood on the rooftop terrace of the packhouse building a few green shield bugs came to sit on our sleeves. When I went for a tour of the orchards their brown cousins were more in evidence, hanging from the nets surrounding the orchards. The nets used by Serbian growers are principally for hail, but they also provide some degree of shade, very valuable this year, as well as being of sufficiently small gauge to prevent birds and shield bugs getting to the crop.

What a beautiful crop of apples there was at Agrounija. The farm is in a wonderful position, less than 1km from the banks of the Danube in the Fruska Gora region on the edges of what was the Pannonian Sea nine million years ago. They are surrounded by vineyards, nature reserves and similar farming businesses.

The whole production unit in Indija has been planted since 2015, producing a focused, commercial, range of varieties; three Gala clones, Golden Delicious and Granny Smith along with an Australian/Italian club variety called Crimson Snow, the latter being a large fruiting variety that is very successful with Middle and Far Eastern customers looking for a much larger apple than consumers in the UK.

I was envious, frankly, mostly for the ability to establish such a model farming system – drip irrigation/fertigation (they have a substantial irrigation reservoir fed by the Danube in the centre of the 120ha of orchards) along with frost irrigation and hail netting to maintain high grade out levels across the four varieties.

With a current market focus of the Middle East, India and Africa as well as near neighbours, the core focus of the production team is the delivery of larger sized fruit. The samples I saw in the packhouse were wonderful, as was the quality of the fruit on the trees outside. It’s always a timely reminder of the skill of growers in managing the crop loading according to the target marketplace, something that the young, and clearly very expert, technical team were delivering for Agrounija’s owners.

It’s not all rosy though, and it’s not just the stink bugs that are causing issues; labour is an issue in Serbia too. In fact we are not alone, pretty much anywhere in the world right now, in trying to find younger, well-motivated harvest labour. Speaking with Sara, the orchard technical manager, and Biljana, the production manager for Agrounija, they have noted the same change in age and demographic that UK growers have experienced.

“Ten years ago, we had students,” stated Sara. “Now its more like we employ their parents. We have seen a drop in the numbers coming here to pick as well as in the productivity.” Like many farms, they have begun to invest in autonomous harvesting rigs. Along with their parent company, MK, and BIOS (the regional equivalent of NIAB, which is also working with the UK’s Agri-EPI centre), they are evaluating a range of robotic and semi-autonomous picking and management solutions.

At present they are using Hermes Tecnofruit self-drive platforms, which have made a substantial difference to the rate of harvesting and quality of picked product, taking the strain off the pickers. They are also another company evaluating the benefits of British tech business Outfield in improving accuracy of crop estimation and making thinning applications more targeted.

Another similarity to the UK is the rapidly rising cost of electricity and its impact on storage programmes. In 2017, MK and Agrounija made a substantial investment in 25 chambers with a total storage capacity of 7,000 tonnes. The average chamber size is 1000 bins and all chambers allow the use of Ultra Low Oxygen (ULO) and Dynamic Controlled Atmosphere (DCA) storage.

Isolcell is the storage partner and Agrounija has been very pleased with the extended storage capacity for their key varieties, but the power required remains an ongoing issue as the situation is similar to that of the UK; charges will have gone up by 100% in the next quarter. Investigations have begun into suitable solar PV systems that will deliver the power required for such a large facility, along with the technology to manage power demands throughout the season.

It was lovely to meet with an overseas grower again, enjoy a walk through excellent orchards with really talented technicians and be reminded that growers still have so many issues in common.