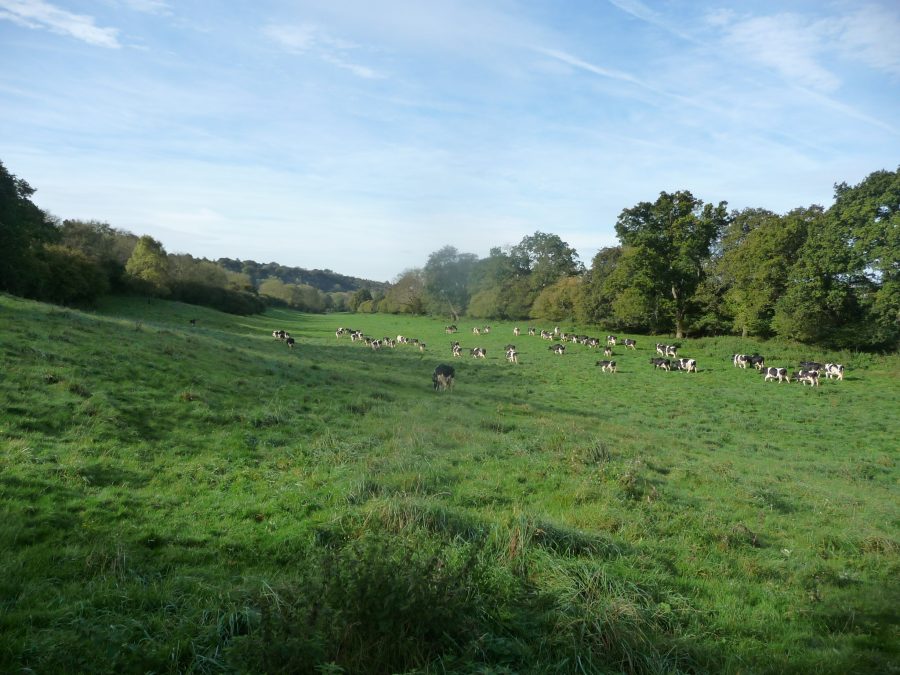 The maize is finally well away after a difficult start. Being nurtured on nitrogen at around £650 a ton, we don’t want failures! All we really need now is a mix of warm sun and regular periods of night rain. What was it called, a typical English summer?

Generally speaking, there isn’t too much to go wrong on the farm since sadly there are no livestock to occupy us. Not that they gave us a lot of headaches through the summer months, but there were inevitably day-to-day problems. Most would be solved by ourselves, and as long as the grass was ready for its first cut about 10 May and grew on well for another good cut in late June/early July, then producing enough grazing until early October, when the clamp was topped up with maize ready to feed them through the next six months, all was well. There were occasionally years when the plan didn’t quite work, but all in all we were pretty lucky.

The biggest problem we have had for the past three years has actually been nothing to do with farming but instead with vandals. For some reason they have increasingly taken to smashing up our old dairy complex on the home farm. I think the biggest attraction has been the lack of cattle, so they seem to think the farm buildings have been abandoned and left for their ‘pleasure and creativity’. More accurately, braindead destruction.

With significantly more damage this spring, and despite installing CCTV, I eventually came to the conclusion there was little point in claiming more insurance money and repairing something over and over which attracted these louts, when we could remove the largely redundant building and take the fun away from them. It also removed the possibility of one of the poor little dears crashing through its old asbestos roof onto the concrete floor, some 12 to 14 feet below. They had already ‘softened up’ the roof sheets for such an event by smashing anything hard they could find through the roof while they played on it.

To warn them of the risks, the police provided us with numerous warning notices alerting them to the dangers, but they seemed to delight in tearing them down. One wondered why, but I presume they hadn’t learned to read. After all they were only somewhere between 12 and 14 years old. However, none died and the old barn, having served my cattle well for almost 50 years, has now gone, along with its rather too accessible roof.

The milking parlour, too, with its long-redundant four-by-four herringbone, suffered the same fate, totally destroyed by the same fools, although it seems to be losing its attraction recently as there is now little left to destroy. I think the CCTV system has spread the word, and with some of the offenders brought to book the ‘risk reward ratio’ has rather balanced the situation in our favour.

But it is a pretty sad reflection on the lack of reason and responsibility of some families (or should I say parents?), each breeding probably two or three, second generation, feral offspring who, with even less still to offer, will probably never be able to contribute anything to society.

Of course, as they grow into adults they will fill the courts and prisons for years to come. It makes me despair, particularly when you are lucky enough to have lived, as many of us have, in lovely peaceful rural surroundings and worked in a great industry and seen what many recognise, in the second half of the 20th century, to have been the best, most peaceful period in our history. Mind you, the atrocities we have been seeing recently in Ukraine have rather changed that.

As one grows older, perspectives change, ambitions alter and one’s future and opportunities are more limited. Along with many farmers I anguish over how we will be able to leave our businesses fit for the next hundred years. It’s a big problem. Whether one has children or not, I see one of the biggest issues as how to help preserve our old rural settlements without them being swamped by the brick boxes that pop up on a daily basis on our ever-shrinking greenbelt neighbourhoods.

I know there are many views; some perhaps don’t care as much as others, but having lived and farmed, as a family, within five miles of the home farm since the mid 1600s, it actually matters to me what happens to our little hamlet. So I am working on a scheme that could protect it from further development for many years to come. Early days, and lots to work out, but those of you who have been as lucky as my family will probably understand what motivates me.

In the meantime we still have a great group of friends who expect to find the bowling green playing true and fast every Tuesday, I have lawns to mow, ditches and ponds to dig and keep tidy and some acres still to oversee. The let land is not too much of a problem these days, and of course the sitka, Norway spruce, Scots pine and native hardwoods in Scotland continue to grow ‘off their own bat’ with very little input, as long as the winds don’t flatten them, which luckily we seem to have avoided so far. It is such a pleasure to be able to drive or walk round those hills and marvel at the growth. Most ‘leaders’ this past year have put on almost two and a half feet, or whatever that is in today’s money.