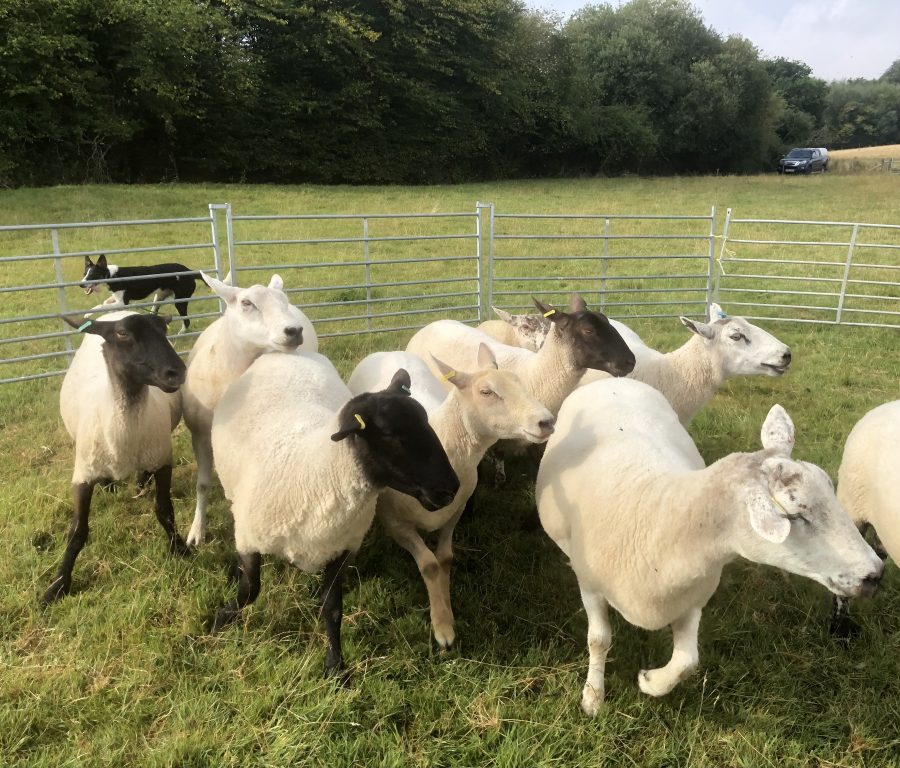 Shutting the chickens up is a mundane chore, best done at dusk, when they’re on their perches and it’s a simple matter of closing the hatch. If you go too early it’s surprising how artful a chicken can be at evading capture.

Our spaniels and sheepdogs like to accompany me and do a final tour around the farmyard. On a recent occasion I heard a lot of crashing about in the workshop, followed by some squeaking, a sound which got louder. Floss jauntily advanced towards me, carrying a live rat. To my horror I realised that she intended to give it to me, just as she does with pheasants.

Floss must have overheard us discussing the lack of pheasants available for the forthcoming season and decided that she’d better earn her keep on rodent control. However, hard mouthed spaniels are not good, and to be fair, she hadn’t killed it. A miracle she wasn’t bitten, but from my point of view I’d rather receive a dead rat than a live one.

As I backed away, I hysterically yelled for help and luckily other half arrived on the scene. Floss was eventually persuaded to drop her squirming trophy, which was quickly dispatched. I thanked her, explaining that rats’ tails freak me out so I’d rather she stuck with pheasants because at least you can eat them. I sure hope she understood.

Because of the hot weather, I delayed starting the sheep dogs’ training, to reduce stress levels for ewes, dogs and myself. I’ve now created a round pen and sorted out some suitable ewes and the sheepdog teenagers are beginning to refine their skills.

On their first go, Tip went around the pen like a tornado but eventually settled and balanced well. When she was exhausted, she obeyed my “lie down” command. Molly was calmer, interested in sheep but needing encouragement, lolloping cautiously around the pen, balancing the sheep to me but reluctant to react to my “lie down” command. Both came away from the sheep well. The two pups are like chalk and cheese, from the same litter but with such different attitudes. Work wise I’m hoping they will complement each other.

Lambs were weaned later than planned. All sheep work has been carried out in the early morning or in the evening to avoid the heat of the day. We have no fresh grass to turn the lambs on to. Even the fields that were cut early for silage and hay have little re-growth. Annoyingly, thistles are still looking strikingly green while everything else is depressingly brown.

Despite the drought conditions, the livestock generally look well. We’ve put hay out in round feeders for the ewes and cattle. The lambs are currently grazing on marsh ground beside Nunningham stream, pasture that was previously grazed by cattle and then rested. It’s the greenest grass we’ve got. Water levels are alarmingly low; when I was a child they’d put in sluice boards during summer to back up the water.

We’re not allowed to supplementary feed cattle grazing on the Pevensey levels and the stocking ratio is low. We received a call yesterday, one that every farmer dreads: “Cattle on the road.” It’s worrying dodging the crazy drivers with not a moment to spare and the actions of unpredictable cows and calves. It was less than 24 hours after moving the herd onto a fresh area of grazing, but the ungrateful beasts, mostly mischievous calves, decided that exploring in the dyke and clambering up onto the road was fun. Luckily no one was harmed. We spent the rest of the day working on electric fencing to contain them. It’s a tiresome task on a hot day.

The low water levels in the larger rivers have also created problems, because the usual drinking places have become more difficult to access, resulting in cattle falling into the water and struggling to get out. We had a young calf fall in. It happens in a moment, but it takes unplanned swimming and a lot of effort to get them safely back on dry land. Cows are surprisingly good swimmers, but a combination of silt and weeds tends to complicate rescue missions.

Our marshland neighbour has cows that are particularly ardent swimmers; this summer they had to extract two in one week. Whoever said farming is dull?

We took Angus, our two year-old grandson, to watch a combine harvester in action. Far from finding it dull, he was excited and overawed by all the activity going on. In fact he fell asleep in Grandad’s arms, but was talking about it for days afterwards.

There’s been an alarming number of fires related to harvesting this year. Fire in a standing crop, with the wind behind it, must be such a terrifying and devastating experience. Taking precautions, assessing fire risk and having an emergency plan can save lives.

Everyone has a right to be supplied with water and the South East region has increasingly been affected by low rainfall. I make no apologies for again voicing my concerns about building so many new houses in this area, creating greater demand for water at a time when supply is diminishing. Looking to the future, what is the plan for maintaining an adequate water supply? Surely more water storage facilities are needed, along with quicker repair of leaks, less wastage and generally more conservation of water.

My eldest daughter, a nurse who works in Brighton, has recently moved to Seaford. She persuaded me to join her for a swim in the sea. I was therefore shocked to watch on the news and in videos on social media, raw sewage being released into the sea in several places along the south coast. Swimming on beaches being banned for health reasons at the height of the tourist season isn’t a good sales pitch. It’s worrying that even with the present housing numbers the sewage infrastructure isn’t coping.

Cattle on the marsh

They say sheep are trouble, but cattle get themselves in pickles too. Found the missing calf

Keen for a move

Floss was reluctant to leave her catch

Tilley picked it up just to prove she could

Keen for a move

Usually the water levels keep cattle in, now they simply walk around the gate

Mollie prefers the ‘away’ direction