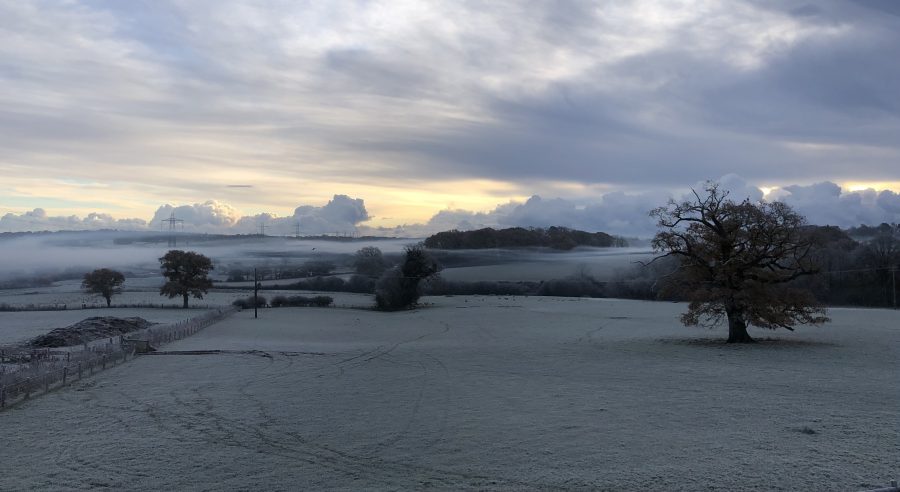 What a difference a month makes. In November we saved on heating costs, but in December we raided our seasoned wood store to feed the log burner. We set our air source heat pump thermostat on 17.5 and it’s working effectively, but with electricity costs today it makes sense to boost our heating by using the wood from fallen trees from the farm.

After a day’s work outside, you can’t beat the cosiness of snuggling down in the armchair beside the stove, watching the flames dancing and listening to the wood crackling. It’s relaxing, and if you’re like me it can lull you into a sneaky snooze.

We’ve got our wintry weather to kill off germs and parasites, but now with snow and ice on the ground the realities don’t seem so attractive. Yesterday morning started with calving a cow, water bag out but not making any progress despite some earnest heaving. Initially we thought perhaps there was a leg back, but when a second foot appeared we managed to get a rope on each leg.

The calving jack was nearby and Nigel put on standby in case extra muscle power was needed. We pulled with every contraction and happily delivered a large healthy bull calf. Even in the freezing cold, and after many years, I still find assisting a new birth an uplifting experience.

However, de-thawing frozen pipes to water troughs in the cattle yards is not such fun. The tractors have been reluctant to burst into life and have needed coaxing to get started and all the stock yards have been given a good layer of bedding. The cold weather gives animals a good appetite; the sight and sounds of cattle munching on hay is strangely comforting, which makes the work rewarding.

I’m interested in mob grazing and have attended webinars and events about how it works. Keen to improve our soils, I’m wondering whether or not to try it, but thinking maybe not in the winter months because it often involves water pipes running over the ground supplying movable troughs.

As the store lambs’ grass was covered in snow, I fed out some hay and used a heavy hammer to break the ice in the water trough. One lamb had got itself wound up in brambles and needed cutting loose. I’m told autumn shearing is the way forward, but I’m not yet convinced.

The fattening lambs in the fields at home get trough fed once a day. A selection of birds enjoys helping with the clearing up process. Where the sheep have laid overnight, leaving little green patches, you can see the birds hunting for worms in the thawed areas. These lambs are drinking from a nearby, non-frozen ditch containing fast moving water; in the summer it’s usually dry.

My ewes on the Pevensey Levels have fared better, with less snow and grazing on longer grass and amongst rushes. Some of the dykes are frozen and others not. Bird numbers on the marshes have temporarily increased, including several lapwing, moved south due to weather conditions. It seems that in cold weather, sheep’s popularity increases.

Feeling exasperated, I’ve just put down the phone after answering a survey about education and training for small businesses. I attempted to convey that when livestock farming on Wealden clay, it’s a matter of fighting for survival. We have plenty of work that needs doing but we can’t afford to pay employees’ wages, since the income generated from the farm barely covers our own costs.

With spiraling input prices, the withdrawal of the single farm payment, uncertainty about ELMS payments and the paperwork involved, will it be worth the hassle? I fully support training, but farming businesses need to be viable and right now that’s not so easy to achieve. Those that look after the land and produce food deserve to earn a decent living.

Today at 6am our daughter Hazel phoned. She’d just collected fresh cows’ milk and was heading to the cheese rooms but found her route obstructed by a dustbin lorry, wedged horizontally across the road. The driver had backed into our gateway to turn, the front of the lorry was hard against the hedge opposite and the back of the lorry had slid on the ice and was inches away from taking out a telegraph pole. The back wheels were spinning.

The driver was very apologetic and announced that this was the first time in 31 years of lorry driving that he’d got stuck. Towing with a tractor looked likely to cause damage, so in the dark we shovelled ballast around the back tyres which thankfully enabled the driver to extract himself from his predicament. Hazel was relieved to unload her tank of milk and begin her cheese make.

We rewarded ourselves with tea and porridge before starting stock work. I planned to get into market, so we were therefore not best pleased when a delivery transit van swept into the yard and proceeded to drive/slide down the driveway to our house. He had ignored our advice to stay in the farm yard. We had to use the digger to pull this one out. The parcel was equipment for the cheese rooms situated close to the farm entrance.

Despite this, I managed to get into market in time for the special presentation organised for Elaine, who, after 32 years working in the market office, is retiring. The farming community thanks you, Elaine, and wishes you a well-deserved, happy retirement.

Market goers were treated to the sight and sounds of a bagpiper parading around the market. Mulled wine and hot mince pies were served in the market ring. The piper, wearing the traditional kilt, confided to me he was glad to shelter in the sales ring, finding the garb a trifle chilly in unmentionable places.

Good luck with new year’s resolutions and happy farming in 2023. You’re all doing great work; don’t let the paperwork grind you down.

Towing the courier out with the digger

Looking chipper in the snow

Time to get the ropes on

‘Have you come to feed us or round us up?’

Autumn shearing, may have advantages