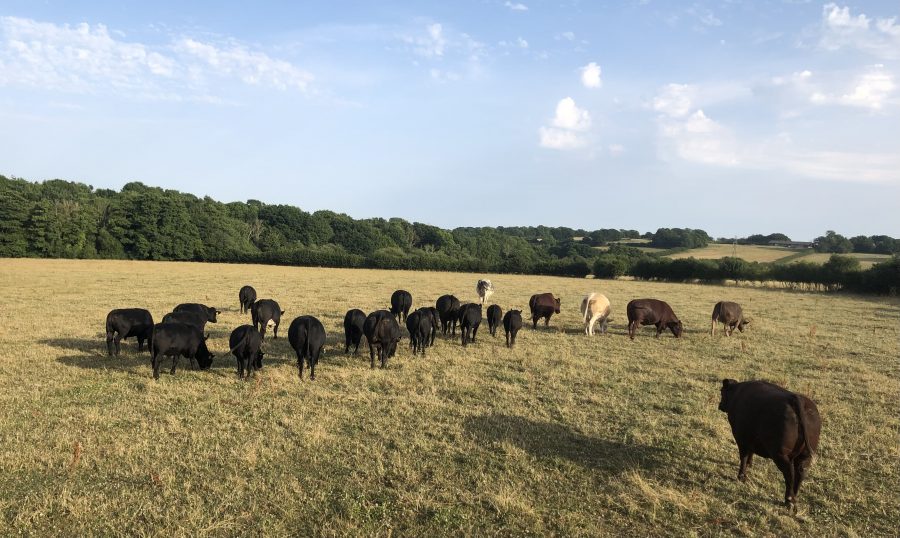 “Make hay while the sun shines” has been easy to comply with this year. Grass growth has been good without fertiliser, but will the hot weather change this from plenty to shortage? I’ve enjoyed seeing the butterflies fluttering in the long grass but I’m less enthusiastic about dealing with scald in lambs, a side effect of grazing it. Surplus grass that hasn’t been cut is literally haying in-situ. The fields of arable crops grown locally have changed colour at an alarming speed and combines are busy harvesting. I worry that the high temperatures will cause shrivelled grain.

Meanwhile, it’s typical that our last two ewes to lamb duly produced triplets, so no chance of fostering. Reluctant to take on more lambs, I decided to try leaving them on their mothers and monitoring them. Incidentally there was an interesting discussion on Facebook as to what to do with lambs not able to stay on their mother. How to rear them, foster, bottle, bucket, machine, give away, sell as sock lambs… are they economically viable?  It’s a dilemma, but as someone pointed out, what is the alternative? “Leave them for fox fodder” was suggested, but I wouldn’t want that on my conscience.

One of our triplets is quite a character, full of spirit, often playing truant away from its mother’s protection. Suddenly it didn’t look so well and when offered milk drank it with great gusto, so it joined the spare lamb clan. I was amazed when I discovered this lamb’s internal arrangements are unusual in that it passes urine and faeces through the same aperture. My head questions spending time on this lamb, but it has a zest for life so I haven’t the heart to do otherwise. It will probably wait until I’ve spent maximum time on it and then do what sheep have a reputation for doing best.

In soaring temperatures, ewes, Brie (collie) and humans were all relieved when shearing day was over. I didn’t want the sheep to stand in the pen for longer than necessary, so delayed getting them in, which put us under time pressure to be ready when the shearers were set to go.

The flock in the woods needed Brie’s persuasive tactics to make them emerge into the bright sunshine. Once in the pen we quickly ran them through the race, separating the lambs and releasing them back into the field, where they mostly found shade beside the hedge. The ewes ran up the ramp better than usual, probably attracted by head banging music pumping out of the shearer’s boom box. Personally I prefer the Beatles.

As the shorn ewes are released from the trailer, they call for their lambs. It’s quite amusing watching the suspicious reactions of their offspring. You can see them thinking: “It sounds like mum, but she looks scarily different.” Usually after a good sniff the lambs dive in for a sneaky feed, ever the opportunists, just confirming that it really is mum.

Big Bertha is not in my good books as today, while perched on the roof of the pickup concentrating on counting 50 cattle, I spotted a woolly Bertha and lambs. She scarpered as soon as she realised I’d clocked her; she must have crossed the river to evade the round up. I’ve put my shearing battery on charge and warned Brie we’ve got a challenge for later in the day.

I think Bertha might just have made it onto the cull ewe list. I was very happy with the buoyant trade in Hailsham market for culls just before the festival of Eid. Some of our single lambs are looking like it won’t be long before they are ready for market.

Our spare/sock lambs currently live in the home paddock and are intently studied by our two collie pups, now seven months old. Mollie and Tip are keen to try out their skills and I’m simultaneously looking forward to and slightly dreading the training process. Some days Brie would welcome extra help.

In the meantime, as part of their socialising education, I introduced the collies to the seaside. We all had fun, so I will try to make time to repeat it. The pups also accompanied us on the start of the 1066 walk – Pevensey castle to The Bull at Boreham Street. For the last half hour their eyes regarded me, questioning: “Are we nearly there yet?”, reminiscent of car journeys with young children. When we stopped in the pub garden, the pups were exhausted and flaked out under the table while we enjoyed a nice cool beer.

While we are on the subject of drinks, legal beagle daughter decided to make elderflower cordial and fizz. She requested numerous elderflower heads and promised us she’d make a delicious, refreshing drink. Legal beagle then ordered some very smart labels to put on her bottles and declared she’d be giving them away as presents.

The other evening I went over to hers for grandma babysitting duties, and on her arrival home she enthusiastically declared we should celebrate by opening a bottle of her fizz. All I can say is I’m glad we were in her kitchen and not mine; there was a loud bang and sticky bubbling elderflower was everywhere. There was about one glass left in the bottle to drink by the time we’d finished laughing. I certainly hope her swanky labels include a disclaimer. It did taste good, though.

I won’t crow too much because my home baking is far from the perfection I dream about; in fact I fear my dentist will have the last laugh. The younger generation keeps banging on about the benefits of eating sourdough bread, so I decided to attend a workshop held in Tilley Lane. An enjoyable time was had by all, I brushed up on my kneading skills and we ate delicious freshly baked bread, cinnamon buns and savoury biscuits, all based on sourdough. But while my home baked bread was tasty inside, getting through the crust proved to be one challenge too far for my teeth. Fixing my chipped front tooth will be expensive. Still, we live and learn.

NB I’m including a photo of Nigel and Hannah’s daughter Zinnia, showing off the homegrown flowers she is named after. Just in case, like me, you’d never seen or heard of them before. 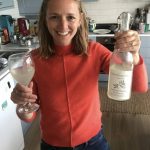 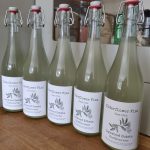 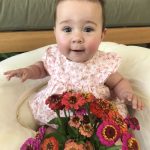 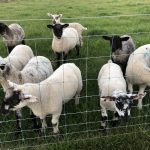 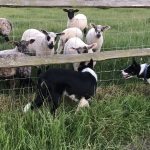 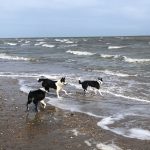 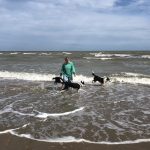 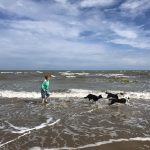 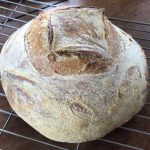 My Sourdough bread; getting through the crust was a problem 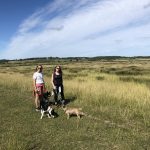 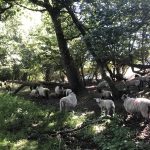 Chilling in the woods 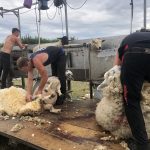 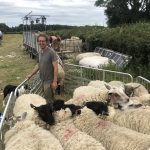 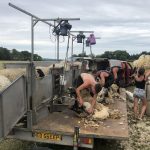 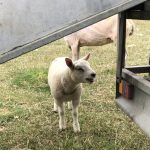 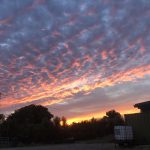