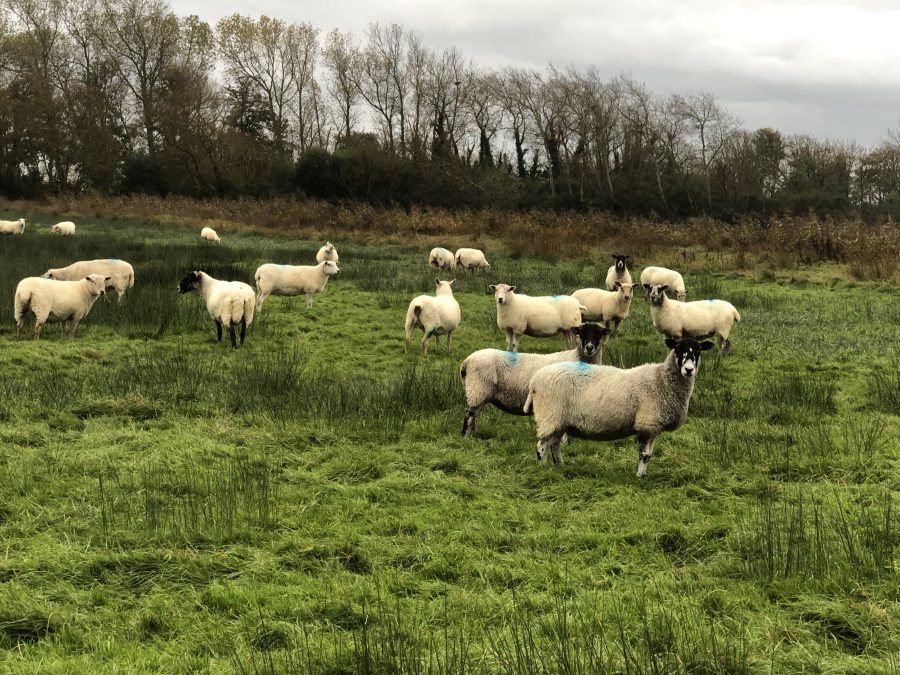 The clocks have changed and the evenings draw in, but November has been so warm. Primroses are flowering, butterflies and bees are out and about. I’ve been in my shirt sleeves working my spaniel, flushing out the pheasants from the woods. The leaves have been slow to fall from the trees and the grass is still growing, although we could have done with that growth back in the summer.

Is this the new normal? On the plus side, at least we’ve saved on heating costs, and the cattle have only just been housed as it has started to get wet under foot.

The fattening cattle were the last bunch to bring in, a task that proved testing. They ambled out of the field and walked the mile down the road to the home farm quite happily. There was a concerning moment when they stopped to look longingly at a field of enticingly lush grass, but a call and a shake of a bag reminded them they were supposed to be following us.

On arrival in the farmyard they went on strike, flatly refusing to enter the shed. In the sun and the rain, we tried every tactic we could think of – and failed. Eventually we made a pen around them and loaded them in batches onto a trailer to take them the 40 metres to their destination.

The weather is forecast to get colder, which will bring some advantages, hopefully reducing the risks of cattle getting pneumonia in the sheds and putting an end to the high levels of parasites affecting sheep. Many flocks have had problems with nematodirus and haemonchus. I was advised to drench my lambs with Zolvix, an expensive wormer I’ve never had to use before.

The bumper crop of acorns this year has also taken its toll as both sheep and cattle are partial to eating them, the consequences of which can be fatal.

The shepherd’s year has begun, with the rams joining the ewes in early November for an April lambing. This year we purchased a new Charolais ram I’ve named ‘Mr Jump’.  After collecting him, I decided I’d put him in the home paddock with a fairly docile blue Texel for company to help him settle in. Mr Jump took one look at his chosen companion and literally flew over the sheep hurdle blocking the gateway. As per the vet’s advice I had planned to keep him separate but had to abandon that idea and resort to putting Mr Jump and the rest of my rams together into a snug-fit pen, where they could get to know one another without coming to blows.

Once the rams had got acquainted and quite hungry, I released them onto fresh grazing and they immediately set about filling their stomachs. Next morning, I was anxious to see how they were all getting on, especially because another of my rams is known as ‘Mr Bump’; no explanation needed for his traits.

He’s not my best buy, but my daughter says Mr Bump’s her favourite because he’s such a character. I’m guessing he was hand reared, he’s certainly exuberant and he has no idea of his own strength. However, he’s a good worker and throws robust lambs. Anyway, thankfully the relationships remained amicable. When the rams were put out with the ewes there was a distinct lack of pillow talk; it was on with the job. Lambing promises to start with a flourish.

Our family enjoyed attending the East Sussex Ploughing Match in September. I entered our collie pups in the dog show and was delighted with a win in the brace category. The grandchildren entered artwork and loved the tractor ride and watching all the ploughs at work.

We also had entries in the cookery section; admittedly my ginger biscuits were crispy, with the judges obviously failing to appreciate that if you dunk them in tea they’re delicious. But my chickens scored a hit with their eggs.

Sadly, my hens can no longer be free range but are residing inside, thanks to the restrictions in place to prevent the spread of bird flu, which seems to be an increasing problem, year on year.

Some supermarkets are rationing the numbers of eggs bought by customers due to supply shortages. Egg production costs have risen and the retailers have been reluctant to pay accordingly. Who can blame producers for reducing flock sizes, temporarily stopping production or simply leaving the industry? It must be stressful working with birds that could potentially be struck down with bird flu, especially if you’re struggling to make your enterprise pay.

We were keen to get our hedge cutting done early this autumn, but on its first day out our hedge cutter developed a problem with the main beam. We called Tuckwells and then Bomfords, who were very efficient at ordering a replacement part, and it was soon fixed. So we’re up and running, roadside only now as there was flooding in the valley last night. This weather must surely be topping up the reservoirs.

Did George Eustice value his own position as Environment Secretary more than safeguarding our agricultural industry? I’m appalled that now as a back bencher he admits that the Australian and New Zealand trade deals were not good for UK farmers. If he believed that, why didn’t he stand up for us?

The closure of Tottingworth abattoir is worrying. The advisor for red meat policy in DEFRA replied to my letter regarding the plight of small abattoirs saying: “I would like to reassure you that DEFRA is fully supportive of finding innovative solutions to address the problems faced by the decline in small abattoir numbers.”

I’m not reassured. There are numerous reports, committees and meetings on the subject but precious little action. DEFRA acknowledges there’s a problem with regulations and staffing so why haven’t solutions been implemented? Words are not enough; we need positive action.

Farming is such fun. I hope you’re all going to take time to enjoy the festivities over Christmas. If you need some supplies, we’re holding a pop-up sale at Hockham farm from 9am to 1pm on 17 December, selling our beef and Pevensey Blue cheese made by Hazel and Martin using Court Lodge organic milk.

Wishing all readers a happy Christmas.

Not much pillow talk

The cattle stubbornly refused to go into the shed

The sheepdog teenagers wearing their rosettes won at the ploughing match