» Let off by a speed cop 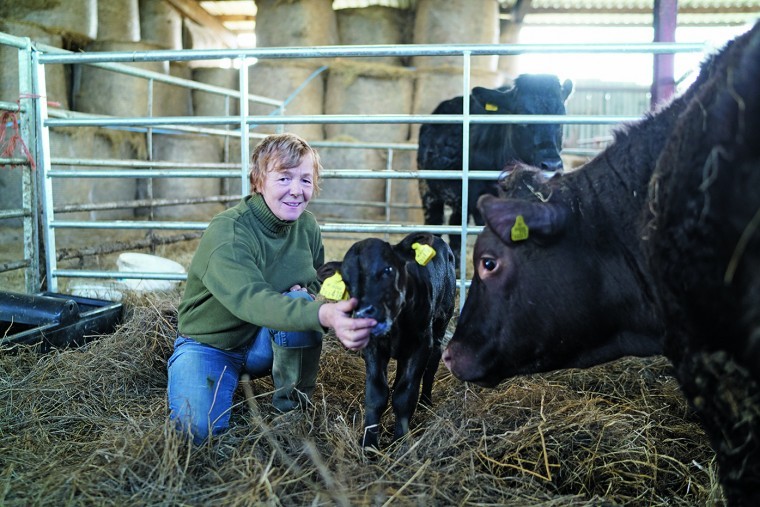 I awoke to the sounds of exuberant cleaning at close quarters. I opened one eye, to discover that Tilley had replaced my husband who had gone to check on calving cows.

A pile of farm fresh dirt lay on the sheet beside me! Tilley’s paws were spotless. She was pleased with herself for having broken the no dogs upstairs rule. I hadn’t the heart to be grumpy but I did tell her that working dogs down under are kept in kennels. I wondered who had left the door open as I followed the muddy trail of paw prints downstairs. The reality of “holiday is over” hit home.

A month in New Zealand and fortnight in Australia – it’s the longest time we’ve been off farm. If you get a chance to travel, I recommend it. It’s refreshing and our memories will sustain us while we are calving and then lambing.

We now know that we are dispensable, as in our absence “The Boy” did good. Henceforth, I have upgraded his name: Nigel might have earned himself a job for life. He is now trying to persuade us to go organic – let the battle commence. Opinion’s within families differ and I note even the Royals have conflicting viewpoints on genetically modified crops.

In contrast with the Australian landscape, we were struck by how green England looks and pleasantly surprised by the spring like weather. Grass growing, daffodils, primroses abounding and even bluebells appearing. But today standing in market it was cold, wet and miserable, not good for newborn lambs. We’ve hit the ground running with lambing preparations. Our breeding ewes moved back from Pevensey marshes, requiring immunising, sorting and crutching. Calving is already in full swing.

We used our Aberdeen Angus bull on our Sussex cows, and are pleased with the results. Sensible cows and lively calves. We’ve only had to help with one calving which happened when James (our prospective son in law) and his brother Tom came to borrow our farm truck for the purposes of a booze cruise. They both have office jobs, but found themselves pulling on calving ropes and were jubilant with the resulting good sized calf. They then set off for the Eurotunnel and celebration tasting on arrival in France.

We’ve also had one teenage heifer pregnancy: she wasn’t supposed to be engaging in that sort of activity. We had concerns due to her size, but all credit to her mothering abilities. She produced the tiniest possibly premature calf. I’ve called him Dinky. His ears are laden down with official tags which accentuate his smallness. Dare I say it, he’s cute. I realise successful businesses need financial rewards, but occasional sentimentality proves we are human and sets us aside from robots.

The vastness of Australia is impressive. It’s 31.5 times larger than the UK. We flew into Melbourne and toured the city. Walked in the lanes checking out the graffiti art, a popular location for wedding photography. We wandered around Queen Victoria street market which makes Borough Market look minuscule – an exhausting but fascinating day. Next we headed along a scenic tourist drive, The Great Ocean Road. We attended a spectacular sound and laser show giving us a virtual experience of immigration in 1878 ending in shipwreck. We also tried our hand at panning for gold: alas, we found none.

Kiwi rentals sink, but Aussie rentals go fast. We were on a mission to attend a cricket match. It was 37 degrees and my cousin had promised us a cold beer while watching his son’s cricketing skills. En route, we were slowing 100 down to 60 but not quick enough. The police car with flashing lights appeared behind. I pulled over.

The young police officer said: “You were doing 75 in a 60 limit, can I see your driving licence? “

“ Really? I’m sorry, I was trying to slow down,” I replied as I handed him my paper driving licence. He opened it and twirled it around “What’s this?,” he exclaimed in astonishment. “Wow you’ve been driving a long time, you could have had a stroke or a heart attack. Where’s your picture? This could be your sister’s for all I know.” “It’s an English driving license, a clean one, I don’t possess a card version.” “Have you got a passport? I need to see the picture.” My passport was inside my body belt underneath my dress. Accessing this by the roadside was no easy task and necessitated ducking behind a tree and doing a conjuring act. I handed it over.

“I clocked you at 15 kph over the limit. I can show you the radar read out.” “I believe you,” I muttered. (If you can’t trust a policeman who can you trust?) then I added: “I’m usually so careful, the sat nav didn’t ding to remind me.” “Oh your sat nav probably needs updating, this is a brand new limit recently set up. The last woman I stopped, clocked it big time and she was really bricking it,” he said with glee. Not wanting to be described in these detrimental terms, I determined to appear cool calm and collected. “We’re farmers back home, and we’re really enjoying exploring Australia,” I claimed, sparking his interest. “What kind of farm,” he asked and hardly waiting for a reply, he bragged: “I’ve got a 303 rifle, I can kill at 8,000 metres.” I fervently hoped that he wasn’t shooting speeding tourists. “Vermin,” he qualified.

The conversation then covered politics, immigration, Muslims, Isis, Trump and Putin. He claimed it all came down to who had the biggest…he must have meant head, I think. When I asked if he’d been to England, we heard all about his ancestors. Thirty minutes later we shock hands and drove off. We live to fight another day.