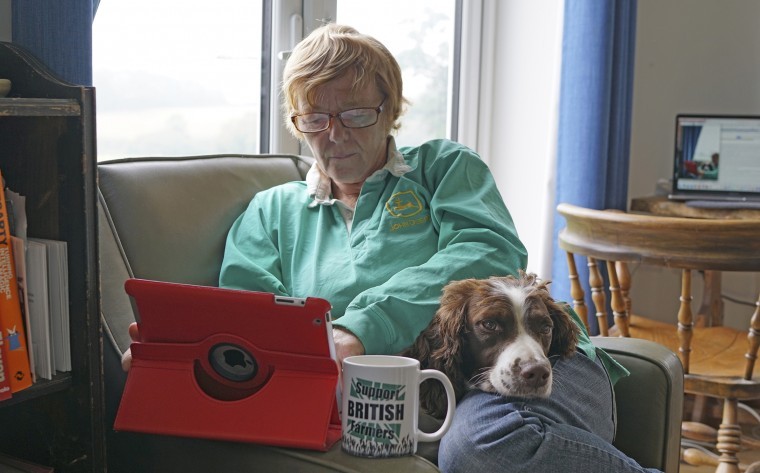 Due to advances in technology being incorporated into ever larger and more sophisticated machinery, farm labour has been cut. A lone operator can understandably feel isolated at times. Mobile phones can help.

The world can be brought to you by embracing social media. Loneliness can be prevented by using Snapchat, Instagram, Twitter and Podcasts etc, but Internet and signal coverage play an important role in rural business.

In my childhood even the smaller farms employed staff. Family and employees pitched in together. I remember stacking bales high up in an old Sussex barn. The person loading the elevator enjoyed pressurising the stackers, until the overload caused the bales to tumble.

It was hard graft stacking small bales up under the tiles, so tea breaks were welcomed. There was much camaraderie, making it fun. Autumn cultivations involved several tractors working in the same field individually ploughing, discing, drilling, harrowing and rolling. Teamwork was more prominent.

Unfortunately labour has become an unaffordable luxury with many farms unable to justify employing staff. Also the added bureaucracy of being an employer acts as a deterrent. Farm businesses that use seasonal workers have tended to employ eastern Europeans. But since the referendum and the consequent fall in the value of sterling it’s become more difficult to find people willing to do this work. This in turn is renewing the vigour for more automation and creation of robotics capable of performing these manual tasks.

If you enjoy the companionship of creatures great and small, as I do, moments alone are rare. Help arrives most unexpectantly: for instance while I was picking plums I felt a tap tap on my trainers, and my laces were loosened. I glanced down to discover that I’d been joined by several of our hens. They were delighted when plums dropped, pecking them enthusiastically. The discovery of a slug resulted in a comical chase with the finder running off with their trophy.

My dogs clearly don’t trust me to do the lookering alone, and are indignant if I attempt to go out in Shrek (our ATV) without them. How good it would be if they could open and shut gates!

One bunch of lambs are at that silly stage of eating hedges, and get their heads stuck in the stock wire. I stopped by one such lamb and asked it: “Can you get out?” My collie understandably thought I was talking to her and hopped off Shrek, looking expectantly at me for instructions. “Not you, I was talking to the sheep,” I explained. She patiently hopped back on board. Despite the lamb having stood trapped for hours, the sight of the dog sharpened its mind and it quickly pulled itself free from the wire.

Personally I don’t find farming a lonely occupation. Sheep and cattle can be quite congenial company when you’re working with them. Admittedly they can’t hold a conversation but sometimes their behaviour and expressions speak volumes. There are circumstances when I’d say their presence is definitely preferable to human contact. Mind you it probably helps if you are the kind of person that is happy with their own company.

Livestock markets are a good place to go if you need a “talk farming” fix. It’s best to bring along a sense of humour, for here you can always find someone who has bigger and better or contrastingly had a far more disastrous experience than you. Incidentally there was the most enormous pig I’ve ever seen in market this week. A Duroc boar, weighing over 500 kilograms: now that’s a lot of sausages. Attending market will prove to be entertaining regardless of how high or dire the prices are and the market cafe food is an added bonus.

When dealing with livestock, it’s best to allow for the unpredictable. Observing demeanour and attitude is useful information. Safety should always be considered. As tupping approaches, rams can be far from congenial. Our Suffolk ram couldn’t wait for me to get his food in the trough. So he gave me a tidy bunt and it flipping well hurt. I might add that when in the presence of the bull, I never leave anything to chance, and I’m always polite to him.

Attitude is a little thing that makes a huge difference. Communication is not difficult, so why don’t people communicate? It’s so frustrating when deliveries don’t turn up. We all know that sometimes things don’t go according to plan, and it wouldn’t take much effort to put the end customer in the picture. Making a phone call or email, giving an explanation and a realistic estimated time of arrival would make everyone’s life so much easier. I’m appalled by the “couldn’t care less” attitude of some delivery companies.

Is nothing sacred these days? A large round straw bale got dislodged from a load. It was rolled onto a wide grass verge and I was detailed to retrieve it in the pickup. It mysteriously disappeared – a bit like my socks, but I don’t think we can blame the dogs this time.

Autumn is upon us. We’ve struggled to get a dry slot for grabbing some late silage. The grass is growing, and I’m finding several mushrooms. There’s a bumper crop of fruit and berries which makes me wonder if we’re in for a harsh winter. My husband likes a little bread with his jam so I’ve made lots of preserves. I enjoy picking fruit, it’s kind of addictive. Next up is making sloe gin: I’m definitely looking forward to that.