Would Kerry back the worm or the bird? - South East Farmer 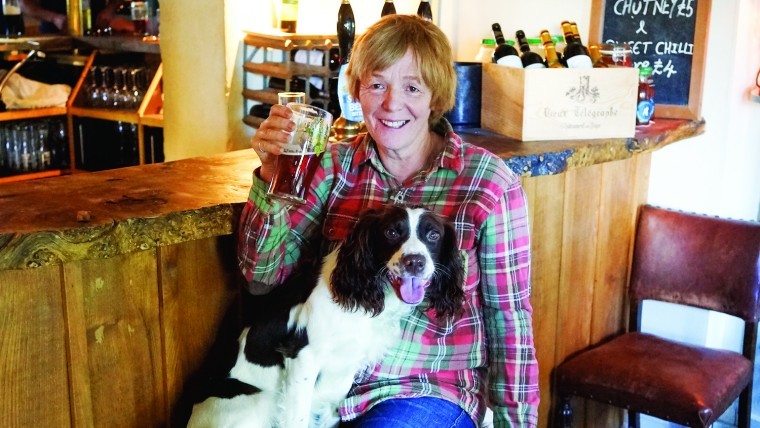 Toasting Richard, wishing “management” and him happy holidays, and drowning all the woes of the farming community in this one pint is quite a tall order. Maybe I should have more? If the drink adverts are to be believed, amazing things will soon happen.

Mulling over recent farming conundrums calls for some shots perhaps and inspiration. Tilley my springer follows a different kind of shot. She has already established that there are no pheasants in this pub and is wondering what the game plan is.

I rarely waste time thinking about politicians. The expenses scandal proved that whatever aspirations they begin with, politicians tend to become engulfed in the mechanism of bureaucracy, power and greed. Serving their country becomes secondary to lining their own pockets. The goal of improving the lives of their constituents is lost. Jeremy Corbyn bursting into the political limelight has certainly stirred up a cauldron.

I was amused by the different comments generated by the appointment of the vegan, anti cruel sports campaigner, Kerry McCarthy as shadow DEFRA secretary. The NFU predictably stated that they look forward to working with her, as ever safely sitting on the fence. The Countryside Alliance are wondering how Kerry will reengage the Labour Party with the rural community. Whereas UKIP observe that Kerry will have little in common with either the producers or consumers of food, saying that Corbynytes would like DEFRA renamed to the Department for the Eradication of Farmers and Rural Areas! Personally I question whether any government has enough balls to sort out the supply chain, take on the might of the supermarkets and put agriculture on a sustainable footing.

I felt incensed by an article written in the Saturday Telegraph on 12 September entitled “Farming subsides are fatally flawed.” I don’t disagree with that statement, but I do object to European farmers being described as belligerent, when they are simply trying to preserve their livelihoods. In the article, farmers are blamed for having inefficient agricultural practices, over producing food and costing the European tax payer €58 billion yearly.

In our defence, it is the politicians that came up with the common agricultural policy and not farmers. MPs are currently receiving an annual salary of £74,000 plus expenses. The columnist accuses us of being inefficient, and yet complains that we produce too much food. How does that work? The politicians created the failing system that us farmers are trying to earn a living from. I would prefer not to have handouts. Instead, I would wish to receive sufficient money to nurture the land and sustain and reinvest in an efficient farming business producing food for a growing population.

Farmers across Europe have been criticised for demonstrating, and I do wonder how the French would dispose of their tyres if they weren’t able to set light to them in a good cause! No business can survive receiving less money for their produce than the cost of production. Livestock aren’t machines that you can switch on and off. Looking at life from the aspect of a beef, sheep and arable farmer, these are worrying times. I have no wish to become a factory farmer. Many are diversifying but I think it a sad reflection on today’s world that it is so tricky to make a living from growing food, a basic requirement of human life.

Personally, I am proud to invest my time, money and effort into producing quality food. However due to a weak euro, Russia’s ban on imports, China’s economic slump, and greedy supermarket shareholders, my income is not covering the bills. So what shall I do about it? Don’t tell me to get out because I’m in it for the long haul. I’m countryside born and bred and that is where I hope to stay. It’s not all bad: fuel prices are down and there is no commute to work. I enjoy farming, appreciating the wonders of working with animals, caring for the environment and I relish being part of the rural community.

On a lighter note, I knew that Tilley had picked up something interesting. But I was surprised when she gently deposited a bedraggled fledgling into the palm of my hand. It was alive but gasping. I thought it would die of fright. I dripped rainwater into its beak. It perked up and began to cheep loudly. I fed it some worms using forceps. This required more skill than you might think. The bird would not keep its beak still and the worm was keen to wriggle away. Eventually mission complete and peace ensued but not for long. Thankfully the fledgling was so voluble that its mother, to my amazement, came to the back door and reclaimed it. Today, thinking of shadow DEFRA secretary Kerry, whose side would she back: the worm or the bird?
PS: I implore everyone to eat a good helping of meat on 1 November to counteract World Vegan Day. It is hard to envisage a countryside devoid of livestock.

Note for Richard re July comments: I’m also an A&E nurse and semi retired from nursing, not farming. Last Sunday’s shift, we were so busy that sadly I had absolutely no chance to think about the biscuit barrel, let alone get my hands in it!