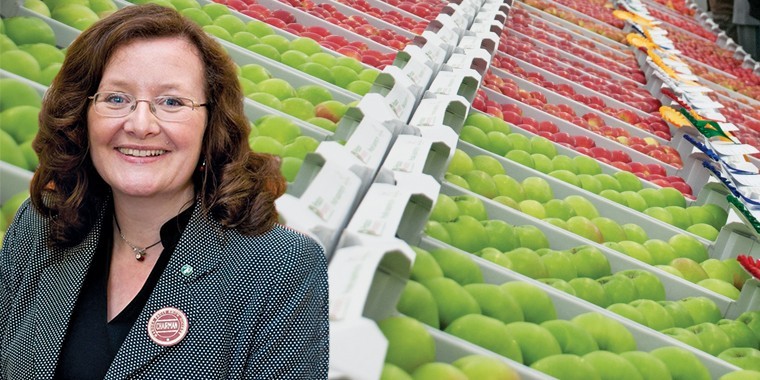 A group of around 70 managed to dodge the threat of rain and walked through the winning Park Farm in Frittenden admiring the highly commercial and well managed orchards. Many people commented that it was a great shame that the late Pat Tompsett had just missed the results of the competition, something he would have been immensely proud of (though he would have undoubtedly had a strong opinion on everything said by the judges).

Park Farm was originally bought by the Honess family in 1930 who farmed it up until 1959. Their nephew, Pat Tompsett, then took over the farm and subsequently bought it in 1962. Pat saw great success at the Marden Fruit show in the sixties and seventies and was instrumental in the further development of the event. In 2005 Pat sold the farm to Laura and James Hasell: James is the grandson of John Honess, and the farm stayed in the family. Farm management has also been a family business with the current manager Jonathan Duke taking the role over from his father.

As we walked round everyone was in agreement that the farm was a text book example of fruit farming, with the pear orchards showing an especially fine set of Conference, Comice and Concorde – something viewed with considerable envy by the other growers. Chris Levett stopped the group in the winning Zari orchard and explained the technicalities of growing the variety. Essentially both parents (Estival and Elstar) are prone to bi-annual cropping and Chris has been allowed by Jonathan Duke and James to try some radical techniques to control growth and to manage the return bloom.

The successful programme includes pruning directly after harvest to control growth and blossom potential – the idea is to have clusters of three apples evenly dispersed throughout the tree to control fruit size. The carefully managed crop also reduces the number of pips releasing gibberellins which retard bud development – the heavier the crop, the more bare wood the following year. Nutrition is also provided in a different schedule in June, July and post harvest, with foliar feeds through the season and strictly no applications before June. There was more than a little scepticism from the growers but the fruit set was good and the colour developing well with picking set to begin around Bank Holiday Monday.

I meet so many lovely people in the fruit industry and occasionally I am part of a little bit of “paying forward”: last Saturday was one of these times. The Kember family gave their Lower Ladysden Farm pick your own (PYO) operation over to hosting a spectacularly successful strawberry tea event to raise funds for Breast Cancer care. Many local companies rallied round donating bouncy castles, generous raffle prizes to help raise additional money and gorgeous cakes to go with copious cups of tea. The event brought lots of new visitors to the farm: the fruit rows were picked bare by the end of the afternoon and a fantastic £820 was raised for the charity. Ladysden is the best kind of PYO – family run with great enthusiasm, delivering a kind of super allotment and it is loved by their regulars.

The business has also had great success this year winning several awards at the national soft fruit show, notably their Glen Ample beating the hugely successful larger growers in the region. One of the things that I love about their operation is that they, like many small farms, promote themselves on a shoestring budget but to great effect. A very active facebook page and twitter feed keeps everyone informed of availability; there was a great teaser campaign this spring generating a swift start to the asparagus season. The competitive successes are also relayed to food service customers driving up volume sales and demand for a good proportion of their production: it gives a good balance to the business.

The competition schedules are out for the National Fruit Show. Our eighty first is set to be one of the best yet and with a good quality crop out there we are looking forward to seeing a large volume of very competitive entries. The G&PW orchard competition was won this year by a farm who had never entered before. If you’ve never entered the fruit show before, perhaps this could be your year!