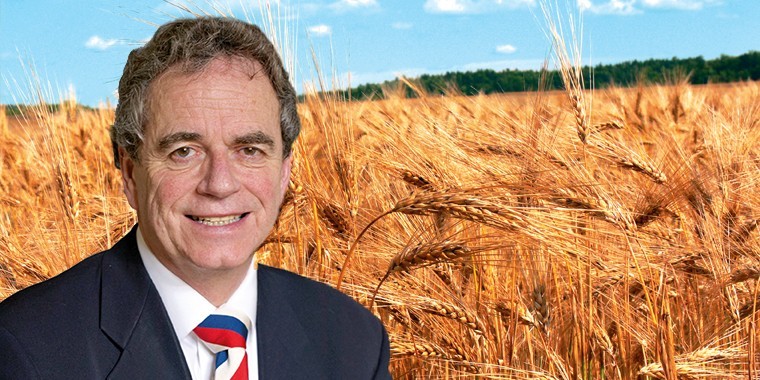 It is difficult to believe that since my last article, written 1 July the new crop wheat futures have fallen another £10 per tonne! It looked low enough then.

New contract lows on global futures are being hit every week (some are four year lows) as the northern hemisphere harvest gathers pace. Whether it’s the European Union, Russia, Black Sea, expected yields or better are being achieved so far.
In the UK winter barley yields are at or above the five year average. Oilseed rape is disappointing compared to expectation. Unusually, before the end of July the wheat harvest has also started. Early indications are of variable quality, but if the protein follows the nitrogen of winter barley it will be on the low side.

Our bushel weight looks OK, the crop is dry and sound so far, but very little has been done. I was in France last week and saw low hagberg weathered wheat which will only make feed. With the French crop having quality issues, the big export prize for the UK, can be achieved, so long as we have identifiable soft/hard wheat with good bushel weight, hagberg and at least 11% protein. Proper milling wheat at 13% protein will be a rare bird with premiums to match.

Returning to barley, while being surprised at the level to which the general grain market has fallen, I remain undiminished in my optimism for the barley market, given time. True, better than expected yields of winter barley has put more pressure on the harvest market, but those who can store barley will be advised to do so.

We are now in the critical phase for UK spring malting barley. The nitrogen levels have already been set, and they are going to be low. While that is good news for the distilling market, it may be bad news for the brewing industry where they really do prefer the barley to be between 1.75 and 1.85 nitrogen. Some contracts have minimum nitrogen clauses under which barley could be rejectable, so some malting barley could be too low in nitrogen to use.

Grain size of around 90% full barley retained over a 2.5 millimetre sieve is essential for export malting. I am concerned that high temperature over the last few weeks will have made barley go over too soon resulting in thin barleys. So it is all still to play for as far as UK barley quality is concerned.

Despite the feed barley price falling, spring malting premiums have remained high, and they will until all the spring barley is safely in store. Then the maltsters/brewers will reassess their needs based upon the known quality of the harvest. France has completed 70% of its spring barley crop and while it’s been exposed to the same weather that has caused quality problems in the wheat, they say the barley has not been affected. I cannot really believe that: we shall see.

So with Ukraine, El Niño and all the other so called game changing events slipping off the radar screens, it now becomes a much more domestic in the face affair – all about the harvested quality of wheat and barley. With a potential extra 3.5 million tonnes of wheat coming on to the harvest market, compared to last year, the whole industry will struggle with logistics and storage, and patience will be required as growers find barley, oilseed, wheat all being telescoped into a very short harvest period.
The production from this early harvest cannot all be moved at the same time. There are not sufficient lorries or homes to accommodate it. What we know is that in the UK and Europe and the northern hemisphere, we will have a lot of grain. It will either be a lot of good, or a lot of bad, but it will be a lot of something, so let’s be grateful for that at least.