» Lambing is in full swing 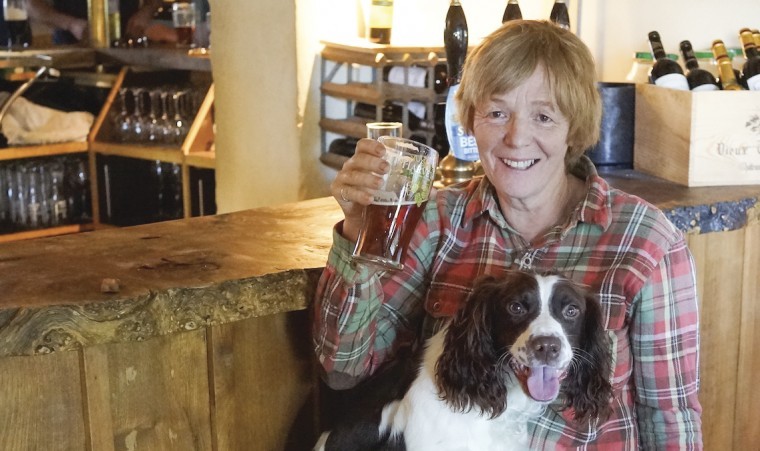 Lambing is my favourite time. The ewes have been brought back to the home farm, dagged out and numbered, blue for singles, red for twins and green for trips. Prior to this triplets were kept separate and given extra feed. Now they’ve been mixed together but have access to high energy blocks and are on reasonably good grass. One triplet reacted to this upheaval, showing signs of hypoglycaemia, when treated with oral propylene glycol and subcutaneous calcium, she recovered well. By lambing later we’re experiencing less nutritional problems and fewer prolapses.

I’m very excited about the new addition of a shepherd’s hut, beautifully crafted by my brother in law. The sheep are intrigued by its presence in their lambing field. Whoever sleeps in the hut, gets the reward of doing the early morning look around! Lambing is now in full swing and the weather is amazing. Dehydration from heatstroke could be more of a problem than hypothermia this year.

I appreciate looking around at first light enjoying the delights of discovering what mischief the sheep have been up to overnight. This morning there was a heavy mist, which created a special kind of hush, only broken by the sounds of prolific birdsong, interspersed by the occasional woodpecker’s tapping, a pigeon cooing and a distant cockerel crowing. I’ve even heard the cuckoo this year. Often you know that a ewe has delivered before you can see her lambs, by listening for the mothers chat with their newborns. As the mist lifts and the sun peeps over the horizon it creates a spectacular scene, giving you the feeling that it’s good to be alive.

During this season, I’ve resolved not to beat myself up over lamb losses, but admit to having moments of grumpiness! I wasn’t impressed when a heavily laden triplet ewe managed to roll over with her feet up the hill overnight, while defenceless she was attacked by predators. The animal kingdom is a cruel world sometimes but luckily the awesome moments of great joy and hilarity balance it out.

Night time casualties are disappointing. I’m told that radio one playing loudly in a lambing shed during the daytime deterred sheep from lambing. They preferred the quieter time to lamb in. It’s true to say that ewes usually remove themselves to a tranquil corner of the field to lamb down. I’m wondering if I play loud music to my sheep during the night, could that be a solution? The foxes and badgers will steer clear and the sheep would cross their legs. My shepherd’s hut is fairly sound proof and I could use ear plugs if necessary. Radio off during the day, all would be well.

I enjoy observing the sheep characters that emerge. Red six has a risky strategy, ranging far and wide, never taking her lambs with her. She must feed them occasionally because they look well. In contrast Blue twenty is exceptionally anxious and never gives her lamb a moments peace. Green fourteen produced four good sized lambs and subsequently insisted she only wanted one of them. Blue twelve, is extremely proud, but equally horrified when her lamb goes to suckle, whirling around like a windmill, trampling him underfoot, just as he reaches the milk bar.

We’ve created a ‘sin bin’ paddock for the exuberant Aunties. Here they learn the inescapable fact that when their lambs are due, they need to deliver their own, stealing from others is not a quick fix, it just complicates matters! We’ve got one or two ewes looking uncomfortably large, added to which they’ve got 50” Z cup udders. These will cause feeding problems when the newborns simply struggle to open their mouths wide enough. They will need milking out, to reduce to a more manageable size.

The importance of ensuring new lambs receive sufficient colostrum cannot be under stated. Therefore if we have any small or weakly lambs, I tend to give them a tube feed. It saves time because this energy boost also gives them a natural resistance to bugs. It provides them with the strength and inclination to feed for themselves. Last year too many of our triplet ewes got mastitis, caused by the trauma of feeding three. Therefore I’m fostering as many as I can, so singles are becoming twins.

I’m determined to cut down on the number of hand reared lambs. Effective fostering takes skill and cunning, not all ewes are easily hoodwinked. Some ewes are even more stubborn than me, but not many! It’s a challenge. We use three methods. One: Wet fostering, while the single is lambing collect up the amniotic fluid add hot water, douse the foster lamb in this and pretend she’s just had it. Two: Put the ewe in a headstock for a few days so she gets used to two lambs feeding but can’t smell them. When you release her, spray her nose and both lambs bodies with air freshener. Three: Skin a deceased lamb, make a jacket for the foster lamb to wear for a couple of days. Add to all these, a dog in close proximity, making the ewes protective mothering instinct kick in.

Scanning information is useful at lambing time when choosing possible foster ewes. It was helpful when I was moving young lambs and ewes into the next field, and a twin ewe took off with only one lamb. She had laid up beside the wood, Brie the sheepdog and I hunted around the field, couldn’t find a trace of another lamb. Brie ventured into the wood, amongst the blue bells she peered down a rabbit hole and I retrieved a live lamb, which we reunited with it’s mum. Brie loves helping.

I’d best get back to shepherding. But one last thought, if Brittany sounds too far to go, could I tempt you to stay in our Shepherd’s hut for an on-farm holiday experience in Sussex. Get in touch. PS I promise to turn the radio down.