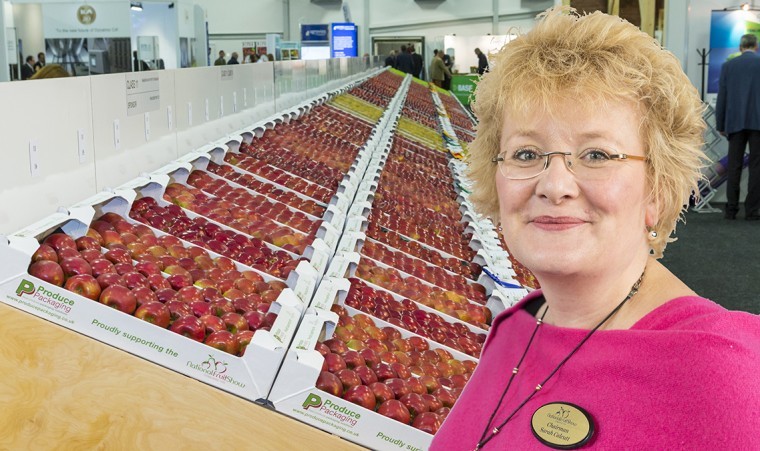 There was no shortage of dynamic interesting speakers from across the sector, including the really rather wonderful inclusion of an astrophysicist from NASA addressing the future of food production in space and the potential for green life on Europa.

For me there were four real stars of the day: Ali Capper our new chair of the NFU horticultural board; Steve Maxwell chief executive of Worldwide Fruit, sharing his knowledge in a typically direct manner; and Laurence Olins of Poupart who was the big interview with Michael Barker. The fourth? Clive Goatham, receiving a lifetime achievement award, his acceptance speech in typically self effacing fashion thanking everyone in his team for their dedication and hard work.

So Ali, launching the new Fit for the Future plan from the NFU, aimed at helping consumers eat more fruit and veg. This is a real mission of Ali’s and I think that with the united might of the NFU behind her, and the gradual gaining of momentum of the fruit and veg pledge, this plan has the potential to make some substantial changes for the better.

It begins with some pretty scary stats about the cost of our food crisis – obesity costs the NHS £5.1 billion (our third largest social burden), 86% of British consumers know that five portions of fruit and veg are ideal yet we are only eating 241 grams out of that 400g recommendation as an average. There are 34 options for action to deliver commercial and moral benefits to our obesogenic community, who are suffering from decision fatigue – too many messages delivered in a nannying way.

Fresh produce needs to keep up with trends in social behaviour; today it is all about convenience and the food grazing lifestyle – shelf grazing at lunchtime or on the way home from work. Only 18% of UK households plan their eating week ahead which means that on shelf prominence of fruit and veg, additional portions in ready meals and the rise and rise of pre prepped make this decision making easier.

The strong message throughout the conference was that produce needs to think like a brand with cross sector marketing and we all have a role to play in helping consumers to make healthy food choices. Consumers want to make up their own minds: they know it is their responsibility to have a better diet and we need to make it easier to make those choices in the fresh and not the pre processed dish aisle.

The big interview at the end of the day was with Laurence Olins of Pouparts, well known and respected for his highly successful leadership of the summer fruit campaign and its subsequent impact on the rise of berry consumption in the UK. With produce consumption in decline, the berry category has bucked this trend and is still getting growth. There are many reasons but the campaign throughout the year has definitely had a part to play.

The focus on the way that berries were marketed to consumers in the UK was changed in 2003/04 with a consistent message focussed on health, occasions, sex and beauty and has completely changed consumers’ use of the product. The next focus is on the lunchtime walk about with Rachel Riley as the ambassador.

Funds are not available to retailers: they are fully briefed on the campaign and how they can join in. The campaign consistently delivers a 1:35 return (£35 of activity and impact in the media for every £1 spent) which far exceeds averages in marketing. The knowledge that it delivers in consumer insight drives change and gives confidence in investment. The top fruit category should take note – it took us a long time to update our product catalogue until it was almost too late and we are now racing to catch up our loss of market segment!

Has the Tesco own farm brand creation been a positive move? The general feeling at the event was not a positive one. The feeling was that it was a half cocked attempt at meeting a requirement from consumers for provenance and it was felt that the made up names and lack of consistent country of origin meant that they were probably doing more harm than good.