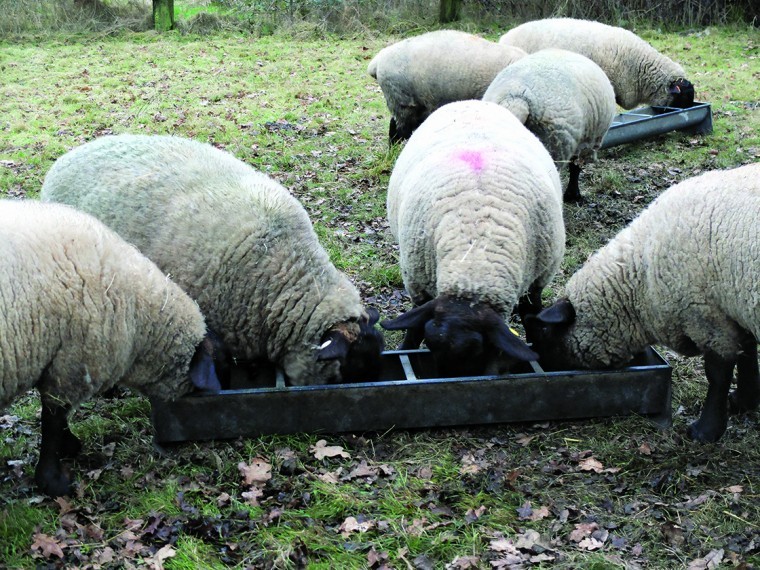 Tom Daborn, from Chobham, won the sheep feeder after a gentleman who offers him grazing bought him an NSA membership for Christmas and he was automatically entered into the prize draw.

The 19 year old admits to being bitten by the farming bug at a young age, when his father was offered four acres of grazing and decided to buy 15 Pedigree Suffolk ewes over 10 years ago. After joining his local young farmers club and taking part in a number of stock judging classes, Tom was hooked.

Now studying veterinary medicine at the Royal Veterinary College (RVC), London, Tom and his father Peter keep a mix of 15 Pedigree Suffolk ewes and 30 commercial Lleyn crosses as well as nine Suffolk rams which will be sold as terminal sires, over 70 acres of grazing rented from local landowners.

Tom is keen to improve the genetics of his flock and says we are all guilty of buying the biggest ram at the market, even if it is not best for the job. “We really want to work on producing a top quality high health status terminal sire that’s athletic and hardy whilst maintaining the vigour and longevity the Suffolk breed has.

“I’m not convinced that it should be the case that the top price goes to the biggest most fed animal in the sale ring but it’s a hard task to heed to because we’re all guilty of going to the largest one in the sale lines because it’s impressive.”

Tom, who rents all his grazing from local landowners explains he’s lucky but it’s not always easy. “Where we are there are a lot of big houses with land that the owners don’t know what to do with it. I’m lucky to have so much grazing but because most of it is for free and there is no contract it means they can turn around one day and say they want their field back without any notice, which is always a worry. The Advantage feeder will help to finish lambs when we are short of pasture during haymaking.”

Tom and his father recently reduced their flock size due to Tom being away at university but say the use of the feeder given to them by the NSA will cut down a lot on feeding time and labour input. Tom adds: “The 3in1 feeder also has the ability to utilise feeds that would otherwise cause acidosis or bloat. I’m hoping that in time, this might bring the feed bill down as I can tailor the feed to the demands of the sheep more closely.”

Andrew Barr, South East regional chairman of the NSA, explained why they ran the competition: “NSA were kindly supported by Advantage Feeders during our 2014 membership promotion, whereby four draws were made throughout the year to win a 3in1 creep feeder.

“New members and those who sponsored them were included in the draws. We are trying to broaden membership of the NSA so that it is truly representative of the sheep industry. The winner of the last draw, Tom Daborn, is a student at RVC, so it was good to see someone young and keen win. Tom was made an NSA member by a gentleman with a past in sheep husbandry, so it is really good to see the older generation helping the new.”

Tom, who has won a number of prizes for his Suffolks at local agricultural shows adds: “I’d like to learn more on how to improve our business efficiency, perhaps by looking at recording. Not just the sheep themselves but also nutrition and how we can utilise the land to best suit our needs. The ground here is light and sandy, limiting options for improvement of the grassland.”