In or out? It’s your shout - South East Farmer 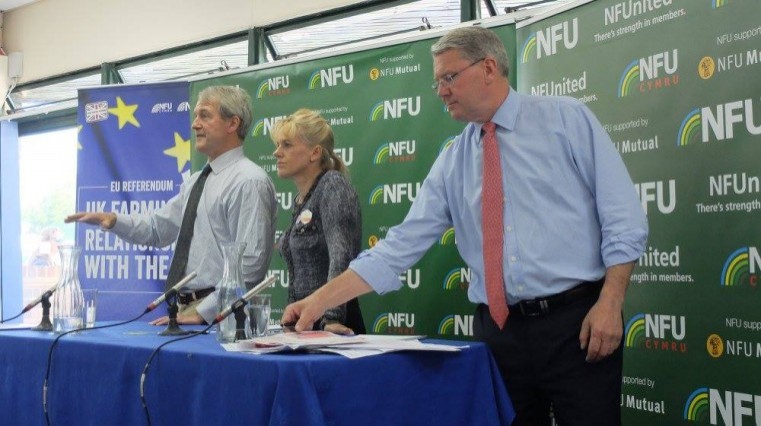 Crowds of farmers attended the event, organised by the National Farmers Union (NFU), challenging the pair on their views and hearing how their industry could be affected in the upcoming referendum.

Arriving with the firm opinion that agriculture would be always be better off in the EU, I wasn’t expecting the next hour of my life to be particularly inspiring, having sat in on many an EU debate in the last six months- turns out I was wrong.

First to the floor was Owen Paterson, who I hadn’t seen in person since he gave a rather dull presentation on UK bee decline at Fruit Focus two years ago.. or was that George Eustice? Anyway..
The likeable MP (oxymoron?) clearly had a passion for the subject and gave an animated history lessons into the rise and demise of the European Union.

Paterson told the audience: “We’ve come to a very clear fork in the road but we’ve got to wish them well.”

Speaking of his time at DEFRA fighting CAP reform, Paterson asked an unresponsive audience: “Who here would have thought up the three crop rule?”

“Not one of you is that stupid.

“I met with the Spanish minister whose country must now try and grow a variety of crops in 45 degree heat where only an olive tree would grow. I met with the Swedish minister, who suffered -45 degree temperatures in North Sweden and can only grow Spruce trees. You can’t set the same standards across a mass that varies so much. We’ve been forced to accept a miserable compromise that damages our environment.”

Which is why Owen Paterson proposes that we take hold of our country and have trust in our own MPs (another oxymoron?) creating a tailor made system that is suitable for our environment and economy.

Of course this seems like a very good idea but as Peter Kendall reminded us in his speech, agriculture is a small industry in the grand scheme of things in the UK. With 84% of our country being classed as urban, we are by no means a priority and aligning ourselves with countries where agriculture is of higher importance is our safest bet.

Let’s not forget we’re the only country in Europe with a law in place that protects badgers- do we really want to farm with a government that could only be described as a bunch of posh pushovers? Look at the ban on hunting with hounds for example. A vote for MPs last July was cancelled because a few animal rights loonies in fancy dress cried outside parliament.

Owen claims that the EU is becoming the ‘museum of farming’ due to its inability to adopt new technologies like neonictinoids and GMO, but if he really thinks a country that values stupidity over science is going to adopt GM in the near future, he’s been sharing too much oxygen with Kerry McCarthy.

With empty promises from MPs flying around daily, really a vote to leave the EU is a vote to jump into the unknown, hands behind your back and blindfold tied. With Michael Gove last week promising cheap food for all and reduced trade barriers to help developing countries on one side, and Boris Johnson offering farmers a ‘much fairer deal‘ on the other, its safe to say no one has any idea how the UK would look without the EU, and judging by track history, agriculture is not going to come out on top.

Owen Paterson had some good points that could have easily swayed some, but amid a few odd jokes about Swedish nurses that I’m not sure anyone really understood, and some rather cross farmers fed up of their questions being swerved, my mind was still made up. In ten day time I will be voting to remain in the European union. Better the devil you know, right?