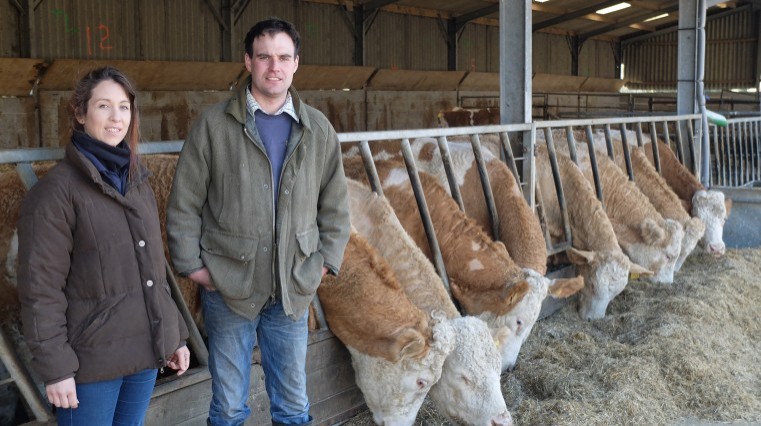 For Charlie Goater, 32, and fiancée, Hayley Nason, 32, taking on a farm business tenancy has meant they can continue the work of four generations of breeding pedigree Simmental cattle at their farm near Basingstoke, Hampshire while running an agricultural engineering business.

Named after his great grandfather, Charlie Hatt of Biddesden Farm, Andover, who was one of the first farmers to use Simmental artificial insemination (AI) genetics in the UK for his white faced Hereford cross Friesians, Charlie Goater is passionate about maintaining the historic bloodlines of his family’s pedigree Simmental herd.

Following the death of his great grandfather in 1973, Charlie’s grandparents purified the herd by buying a pure polled Simmental bull and two cows imported from Switzerland at Harrison and Hetherington’s pedigree sale in Carlisle, for £20,000, forming the Biddesden Herd. In 1998 Charlie’s aunt was able to buy a selection of the Biddesden Simmentals.

It was in 2013 that Charlie decided to start his own herd, using the same genetics, and bought his first five cows from his aunt, some of which are progeny of those brought in from Switzerland all those years ago.

“Our main aim is to maintain and bring on the work of my great grandparents and grandparents to carry the genetics on for future generations. We only keep the very best cattle to breed from and are keen to keep the bloodlines after years of breeding.”

Livestock not required for breeding within the herd are castrated and sold through local livestock markets as farm assured, while heifers are kept on to expand the herd. Breeding bulls are both kept on and sold privately. DNA and fertility tests are carried out as required.

Charlie’s career in agriculture began at Lackham College where he did an agricultural engineering apprenticeship while working with RS Agri Ltd.

Following the four year course he moved to north Dorset to work for Redlynch Engineering and Drews of Dinton, his weekends then spent working with his aunt’s cattle at Huntingford Farm.

It was in 2007 that Charlie went self employed, establishing CG Services, selling and repairing machinery as well as agricultural contracting which gave him the foundations to start his own beef herd six years later. The business continues to grow and last year took on a Kidd Farm Machinery franchise.

Charlie said: “I would recommend an apprenticeship to anyone wanting to enter the industry as long as you have the passion and determination. The experience you obtain is something that can’t be found in any book. Agriculture as a whole is a fantastic industry to work in and although you might not see huge financial returns to begin with, the hard work will pay off and you will receive huge benefits.”

But it hasn’t been without its challenges. Before acquiring a farm business tenancy, Charlie and Hayley kept their herd at his aunt’s farm in north Dorset, travelling 60 miles just to visit their cattle.

“Access to land is a huge barrier to young farmers,” explained Charlie. “It has been a very hard battle finding land that hasn’t been swallowed up by arable, or bought by investors as a form of tax relief. It makes very little available to those that actually want to start farming.”

The couple eventually acquired a farm business tenancy over 20 acres with farm buildings at his grandparents’ farm, and a further 25 acres of grassland on a grazing license nearby.

Charlie’s “if you can’t afford it, don’t buy it” approach has meant that all of the farm’s assets, including livestock, equipment and machinery are self funded and fully owned.

“All aspects of the business fold into themselves,” explained Charlie. “The machinery sales allowed me to buy the cattle and lead to repair work, as does the baleing and wrapping. Regular trips to the market with cattle keeps me in contact with customers with both livestock and machinery.”

Charlie now divides his time selling machinery including hedge trimmers and toppers, and servicing farm machinery while working towards expanding their cattle enterprise.

The value of agriculture

The couple’s love for the industry is evident in their work but also in their passion to create a viable future for upcoming generations.

“Agriculture is incredibly valuable to society, and I don’t just mean financially. Being brought up on a farm is the best foundation for a child. They are taught practical skills, they learn valuable life lessons and they are fit and healthy. We have three young children and you will not find them sat in front of a screen. Agriculture gives back so much,” said Charlie.

“We truly believe that introducing livestock back on this site for the first time in 18 years has brought it back to life and given it a whole new presence. We’ve also seen the wildlife flourish and the whole farm come back to life,” added Hayley.
Charlie and Hayley are keen to add value to their produce: by promoting the breed, they intend to show the public that quality does matter and should be put first.
“We feel that farmers have been pushed into a corner and the value of their product driven down.

“The schemes we are under including farm assurance and a Biobest health scheme, shows we are producing a quality product that is traceable and this should be reflected in the price,” said Charlie. “People wouldn’t put low quality fuel in their car so why would you put low quality food into your body?”

Charlie and Hayley have high hopes for their growing herd, with plans to boost their numbers as far as land availability allows.

“Since acquiring the tenancy we’ve been able to really concentrate on the cattle. We’re adopting new technologies including Moo Call, a device that attaches to the tail and measures spine vibrations and alerts us if a cow begins to calf. This is invaluable to us when living away from the farm and both are working full time,” said Hayley. They also have plans to use AI in the near future.

The farm has also adopted a new mixer feeder wagon bought from RS Agri Ltd to improve live weight gain and condition of the cattle. Their steers from last spring were recently described by Southern Counties Auctioneers as “leading the way” at their local livestock market, Shaftesbury, selling for a top price.

Although not owners of rare breeds, Charlie and Hayley are also members of the Rare Breeds Survival Trust. “Rare breed genetics hold key hardiness and other traits which could be vital for future disease resistance,” Charlie explained. “The traits they have might not be needed now but they could be vital for the future in our changing climate. We would like to introduce rare breeds in the future but right now we are concentrating fully on growing and improving the Simmental cattle.”

As fourth generation owners of the herd, Charlie and Hayley are looking forward to expanding their enterprise and sharing it with generations to come, as living proof that hard work and determination always pays off.

Charlie and Hayley will marry on 22 October 2016 where they have planned a cow themed wedding.