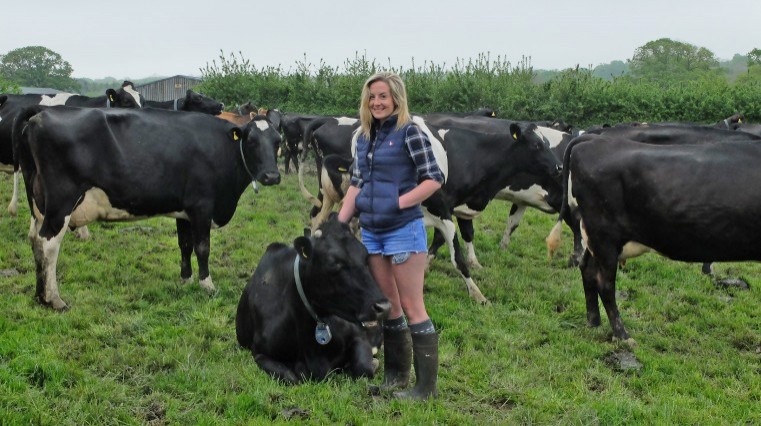 Growing up in East Sussex, Holly’s fascination for livestock started from a young age, carrying out a week’s work experience lambing aged 13 and rearing lambs for the freezer. But as she grew older, the likelihood of cracking the industry seemed a distant fantasy.

“Everyone I knew in the industry had been brought up on a farm, and I felt that because I hadn’t it wasn’t a very viable option,” said Holly. “I finished my A levels and went to university to study English and creative writing not really knowing what I actually wanted to do.”

Like many she had been persuaded that the industry lacked opportunity and there was no future for her. But a niggling thought in the back of her head while she was lambing during the holidays led her to make a drastic decision.

“When I finished my degree I moved home and worked in local pubs, saving money and looking for jobs. But I had no direction and no idea what I really wanted to do.”

During her days off Holly spent time shadowing her best friend’s father on their beef and sheep farm. “One day he said to me, ‘why don’t you just go back to school and study agriculture. We need more women in farming.’”

Behind her parents’ back Holly applied to study a part time national diploma in agriculture at Plumpton College. “It was the course that offered the most practical experience,” she explained. “They were quite surprised that a student with a degree wanted to enroll and breaking the news to my parents was tense. I think agriculture gets such bad press with people saying there’s no jobs or hope for young people. Now my parents see this they are incredibly proud and supportive of my achievements.”

Four months into the three year course, Holly was introduced to local dairy farmer Joe Delves. “I told Joe I’d never milked a cow in my life and I knew nothing about tractors but I’d really like to give it a go. He agreed to let me come in one day a week and the rest is history.”

After completing the course in April, Holly has now returned to Burnt House Farm near Horam, East Sussex, full time as herd manager and is in charge of the whole day to day running of the enterprise, which consists of 216 crossbreed dairy cows with 150 young stock followers, selling to Arla on a solids contract.

“During my middle year at college I worked full time at Joe’s, not wanting to lose touch with the farm and a job I loved. In my third year I was doing the morning milking, spending the day at college and returning to milk again in the afternoon.”

Her hard work paid off but Holly does not take her position for granted. “If someone had said to me five years ago that I would even know how to milk a cow, let alone be running a dairy farm, I’d have never have believed it.

Every day I fully appreciate that I’m living the dream.”

With the help of a few key figures, Holly has managed to excel quickly in the industry.“When I first started I expected my gender to be a problem, but people love it – they’re amazed and surprised. However, I think the negativity surrounding the industry as a whole is putting off young people. If all you hear is talk of bad prices you’re bound to be disheartened, but there’s so much opportunity, you just have to meet the right people. I have surrounded myself with positive people and I feel very good about the future of the industry.”

Joe Delves, Nuffield scholar and advocate for young people in agriculture, is keen to pump new and enthusiastic blood into the dairy sector. He has mentored and helped a number of next generation farmers to progress in their career, and taught Holly to set goals and voice them.

“I tell everyone my goals now because you never know who might be able to help you,” said Holly. “My farming inspiration is Peter Froggatt. He is the one that gave me the push to follow my dreams and has shaped my whole life from his advice and positivity about the industry. We need to see more of that.”

Holly will now be solely responsible for the day to day running of the dairy business, which has been in the Delves family for three generations and began as an eight cow herd in 1947, when Joe’s grandfather met a Land Army girl from the East End of London and they took up a farm tenancy together.

Joe’s father Andy significantly increased the herd size and the farm is now fully owned and has about 140 acres of land, as well as a further 100 acres of rented grazing. When Andy was offered a full time position in the local church Joe took over and adapted the business. Andy returned to the farm during Joe’s Nuffield scholarship and now helps out Holly during busy periods.

Andy said: “I could have gone into beef cattle like a lot of retiring farmers do, but I’d rather see someone young and enthusiastic like Holly take over.” With high hopes for the future, Holly would like to farm her own cows one day.

“I’d love to be able to say to people when I started I was told I have no future, and now I have my own farm. A few years ago I’d have never said I’d be where I am now so what’s to say it won’t happen. I learn so much every day and I never try and take that for granted.”

Holly may have been thrown in at the deep end, with the Delves family putting their full trust in her ability to run their business. But she explained: “I feel truly privileged everyday to wake up and be a part of the agricultural industry. I think for young people the best thing they can do is ask for responsibility. It is the greatest thing Joe has given me, and after all, diamonds are made under pressure.”