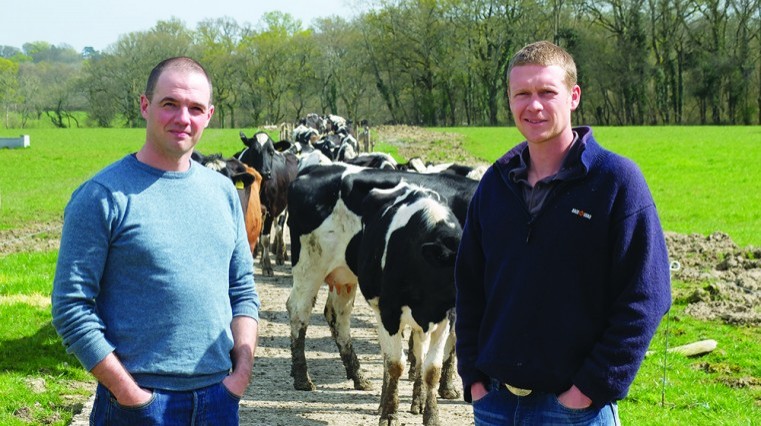 When dairy enthusiast Richard Dayment met entrepreneur Joe Delves at a Dairy Co event five years ago, little did they know that they would one day form a strong farming partnership and an even stronger friendship.

Thirty year old Richard, who left the family farm to study a degree in agriculture at Harper Adams University, went on to work on dairy farms throughout the UK. He then left for New Zealand where he saw more opportunity, but a year later was coaxed back by Joe following the offer of a very different business project.

“Richard stayed at ours before he left for New Zealand,” Joe explained. “When I dropped him and his girlfriend Holly at the airport the last thing he said to me was ‘If I come back, I want to own some cows.’”

“The opportunities in New Zealand are so good for new entrants, and there is a very structured career ladder in place,” explained Richard. “We’re trying to create this here but we’re having to do it in a very unconventional way.”

The pair now have a shared equity agreement at the 330 cow unit, with Richard receiving 15% shares in the business upon arrival, and a further two percent a year based on profits.

Joe came up with this idea after completing a Nuffield Scholarship in how to succeed in dairying, and running his own building company for ten years.

“As a builder I had a limited company and we had shares worth the value of the company. If there was a surplus you could pay a dividend on these. We’re trying to take that structure and make it fit in farming and this short term farm business tenancy,” said Joe.

Once acquired, the tenancy contract had to be strongly negotiated and rewritten to allow the tenant, Joe, to live away from the farm and move Richard in as manager.

“I don’t think farm business tenancies are the poisoned chalice everyone thinks they are,” said Joe. “It has been drummed into us that paying rent is a waste of money, but when you look at the return on investment we are only giving the landowner about two per cent and half of this comes from government subsidy.”

Financed almost entirely through a £2,000 per cow bank loan, Richard’s equity is effectively debt, which he will pay down over the seven year tenancy. The forecasted profit figure should produce profit on Richard’s shares, allowing him to buy more.

“Farming is typically a 100 year business, but we’re technically running this in seven years, with 30 years worth of debt,” said Joe. “Richard can’t have more than 40% ownership due to money security going back to my family farm, but on completion of the tenancy he will have around 38% equity.”

The farm, which now totals more than 1,300 acres, with 400 acres on a grazing licence, has 330 milking cows and 200 young stock, producing for an organic contract with Arla. Richard employs two additional workers, 25 year old Sam Adams, who is second in command, and third year Brinsbury College agricultural student, Kayleigh Robb, 27.

The long term strategy of the business means the milk price has little effect because it will fluctuate accordingly. However, the year they started the price of milk was in decline, and the next year was even worse, so the cashflow diminished. The equity paid off during the first two years has been pumped back into the business and reborrowed to improve cattle logistics on the farm.

“I now have five years to pay off six years worth of debt,” said Richard.

The company pays all its own costs including taxation and financing so it doesn’t matter who owns the shares. Once the tenancy comes to an end and liability and assets are calculated, anything remaining will be split.

Due to price volatility Joe is now offering a reward scheme, so if Richard reaches a goal later than scheduled his shares will be backdated.

Richard explained: “With Joe giving me equity he is deferring my repayment, so he could pay me the market rate for a farm manager but instead he pays me less and gives me equity. This way I’m not taking cash out of the business and am therefore less of a cash burden. Instead I am rewarded at the end with a payout.”

Joe’s actual involvement in the farm is small, visiting once a week and spending a day a week carrying out paperwork. The rest is Richard’s responsibility.

“Richard is trying to achieve what the average person does in 30 years, in just seven,” said Joe. “It’s the best environment for a young person to learn how to behave because it speeds up their growth process and really pushes them.

Most family farms are long term, but we are treating this as an investment. Because the tenancy is so short we need to come in here and get a good return on our borrowed money. The worst case scenario would mean Richard leaving with at least 200 of his own cows.”

Joe’s long term objective is to help young people to buy land and achieve their own goals within the industry, after he concluded in his Nuffield Scholarship that “attitude determines altitude.”

His positive approach to the next generation has meant he no longer needs to advertise for workers on his farms and is regularly approached by young people keen to become part of his team.

With the belief that farmers need to focus more on their people and the next generation, he would like to spend one day a week mentoring both young people and employers.

“Young people need to be more honest about themselves and what they want in life. My advice for young people to progress in the industry is to find your weakness and seek out people who will help you to improve. I find it amazing how the farming industry will openly give away knowledge that it has taken them years to acquire. There’s no industry competition, whereas in other trades they will lie and trip you up. Young people should take advantage of that.”

Richard continued: “Find the best people profitability wise, and rob all their knowledge, then find an equally successful business and do the same. Move every couple of years, keep yourself fresh and build relationships with people. Knock on doors, move around the country, the UK is very small. In fact, the world is.”

However, the enormity of their operation does not go unrecognised and Richard and Joe are painfully aware of the challenge they have set themselves.

“It’s not like we have 20 or 30 years to get it right. There is no plan B,” explained Richard. “In three years you’re just finding your feet, then you only have four years of the tenancy left and the last year is farming as if we’re going to leave or be in massive negotiations with the estate which is a big distraction. Of course there are things we would do differently given the opportunity, and we’ve written a mental list of things we’d never do again. But once you’ve done one hard yard, all the rest are easy and its worth it in the end.”