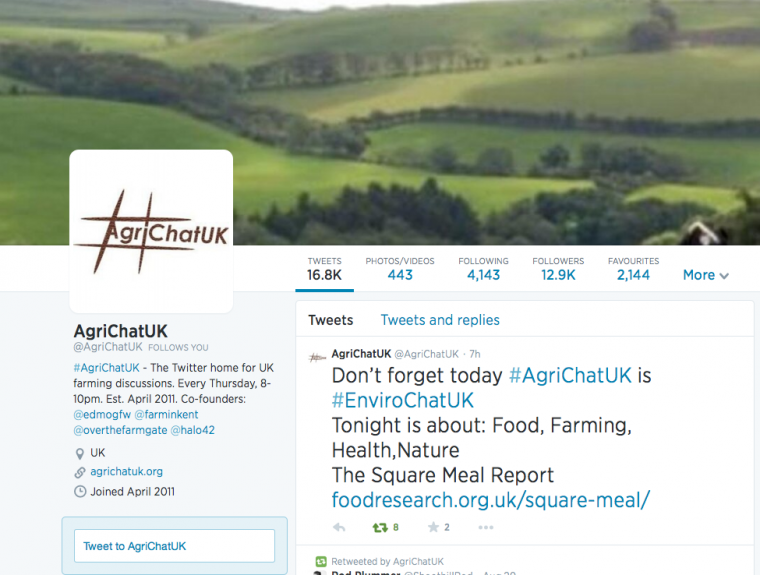 In 2011 a small team of ag lovers got together with the idea to connect farmers throughout the UK via social media and host discussions on all the hottest topics.
AgriChatUK’s aim is allow everyone involved in the industry to discuss, debate, share and connect on a weekly basis.

With four co-founders from around the country including Charles Tassell who farms on the edge of the Weald of Kent and Edward Morgan, who grew up on a sheep farm in South Wales, the group has gone from strength to strength now with nearly 13,0000 followers.

AgriChatUK have done some great things in raising awareness for the industry including appearing on BBC Radio 1 which successfully appealed to young audiences, promoting working in farming.
The weekly chat covers topics varying from Defra’s performance, the future of the sheep industry and more light hearted matters such as football in farming during the recent World Cup.

AgriChatUK takes place every Thursday evening 8pm-10pm. I’ve even started to set an alarm on my phone at five to eight so if I’m not busy, I can get involved.

After such massive success, last week AgriChatUK announced it is to start a new venture once a month called EnviroChatUK.

EnviroChatUK will link agriculture and the growing concern of a sustainable future while encouraging new followers to discuss and debate such key issues.
It will be hosted by AgriChatUk co-founder Charles and a new host, Oliver Dowding who is an organic farmer in Somerset and a trustee of the Soil Association Council.
EnviroChatUK hopes to involve a much more diverse following for all those within the food chain including consumers, environmental organisations and farmers encouraging them to share ideas for the future of agriculture and the environment.

The new discussion group will take place on the third Thursday of every month, with today being the first, talking about ‘The Square Meal Report’, a document highlighting the need for major changes to national food and farming policy.

Twitter has become a popular place for farmers not only to share information and advice but also to make friends. Many farming related hashtags have since emerged including #TeamDairy, #ClubHectare and most recently, #SheepUK.

To get involved with AgriChatUK or any of the other groups mentioned above search the hashtag on Twitter and start nattering. They’re very welcoming! And if you don’t already have a Twitter account, it’s very simple to get one and you’ll find yourself with farming friends all over the country in just a matter of days.

With over 16,000 tweets, AgriChatUK has taken off no end and I have thoroughly enjoyed taking part and getting to know fellow tweeters, reminiscing about my childhood and looking forward to a future in farming.

If you’d like to read previous discussions to get a real understanding then visit www.agrichat.org/discussions