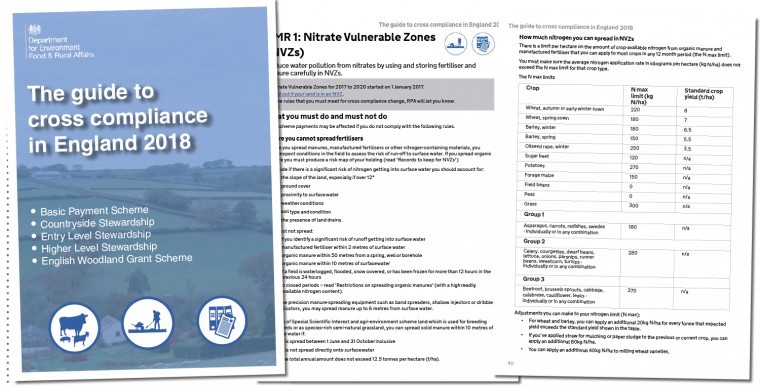 Sometimes the devil is in the detail and as a detail man, lack of it worries me.

We are told by government that “the Agriculture Bill provides for a range of enabling powers to ensure stability for farmers as the UK exits from the EU’s Common Agricultural Policy and compliance with the World Trade Organisation Agreement on Agriculture. It also introduces new measures to change the way in which farmers and land managers are supported in the longer term”.

We also know that Michael Gove is keen to “establish a new system based on public money for public goods”.

So far so supportive, but it would be naive to assume that new regulations won’t mean, er… new regulations. That is to say, enforcement, inspection and compliance. And given that the Bill is designed to “enable” the vision outlined above, it’s thin on detail.

I recently attended a DEFRA/Natural England seminar on ELMS (the proposed successor to Stewardship) and there, lurking among the apparent power tussle between the organisations and the myriad of elements that they were seeking feedback on, was this statement from DEFRA: “There will be an enforced regulatory baseline and ELM will only pay for benefits that go beyond that baseline”.

Having trawled the Bill, there is in fact very little on the use of the “stick”, it is all about the use of the “carrot”, but a new baseline for the industry is clearly in the government’s thinking.

There are at least two angles to consider in relation to this statement. Firstly: Will ELM reward farmers for what they already do – or is what’s already happening going to be taken as the expected minimum, so only improvements over and above the current set-up will be rewarded?

Secondly – and totally aside from ELM – are we to expect a more stringent regulatory regime?

I left Birmingham with the distinct impression that there is a feeling in Whitehall that while there may be a good many rules and regulations relating to our sector, many of them were not well enforced or even adhered to.

We are all very familiar with Cross Compliance, but cast your mind back, can you remember why it is Cross Compliance and not just Compliance? It’s because the rules that you are currently required to comply with to secure your BPS largely already existed. We have learnt to live in fear of the PIF (permanent ineligible feature) and some have even had the misfortune of having their crops recoded, but once the RPA are free from the quantitative approach of BPS they will be able to return to policing regulations of the past (and future).

At its simplest, have a look at the last Cross Compliance handbook you can lay your hands on, it doesn’t really matter which year as you need to flick straight to the SMRs section. The point with SMRs is that they are statutory, even if you don’t claim BPS, and you won’t be in the future anyway, you have to comply with these rules by statute.

Now please don’t misunderstand me, I’m really not trying to put the frighteners on you; I hate NVZ calculations as much as the next man (that’s Kevin’s department) and last time I asked Trading Standards for an R13 Feed Hygiene Registration they had absolutely no clue what I was on about; but there is something ominously missing in the Agriculture Bill and ironically it’s regulation.