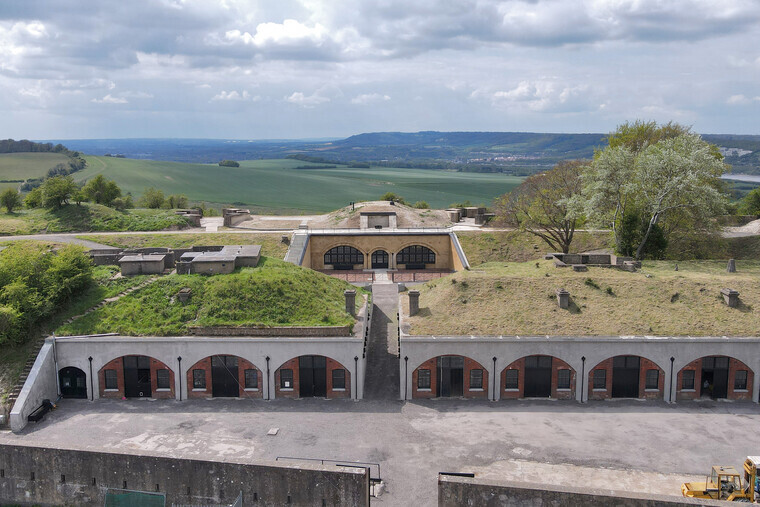 Designed to hold the high ground south west of Rochester, Fort Borstal was the base of an anti-aircraft battery during the Second World War and has an extensive network of underground tunnels and rooms.

Set within around 50 acres in total the Fort – of polygonal design – enjoys panoramic views overlooking the River Medway and even has Napoleonic pathways within the grounds. The Fort itself extends to approximately 8.3 acres and comprises The Guards’ House, a two bedroom home which has the ability for further accommodation to be created, and the Former Officers’ and Sergeants’ Mess, which has undergone a recent refurbishment and provides surprisingly spacious living accommodation.

At the front of The Guards’ House is a small turfed garden and to the side are four former large water tanks, two of which have been converted to workshop space and could provide interesting additional accommodation. Within the heart of the fort lies the Officers’ and Sergeants’ Mess which, partly built into the defences, comprises a wide entrance hall off which there is a spacious kitchen and a drawing room, both with feature arched windows overlooking a courtyard. There are two bedrooms and a shower room that houses a recycled shower that started life on the QE2. On the first floor lies the main bedroom with steps up to the ramparts, which enjoy the best of the views over the Medway valley.

At the centre of the Fort are nine former casemates – once used as billeting for the soldiers based there – which are currently being used as stabling and storage. There is also a large parking area to the east of the site which has recently been renovated, along with a small secure compound that is currently let.

The owners, who are looking to downsize after a labour of love spanning two decades, have used the unique layout and size of the subterranean network to create a number of spaces that have been used in various film and music video shoots in recent years. To add to the intrigue, the tunnels lead down to the old magazine chambers where the owners have created their own private bar and entertaining area.

Chris Spofforth, who leads Savills rural agency team in the South East and is handling the sale, said: “Without question, this is one of the most unusual sales I have been instructed on in my career. Not only does it have a wealth of history, Fort Borstal also presents an utterly unique opportunity to acquire a one-of-a-kind site that offers an exciting renovation or redevelopment project that brings with it an array of possible future uses. This spectacular and diverse property, the like of which may not be seen again, is complemented by the viticulture, equestrian, natural capital and leisure potential of the sale, subject to the necessary consents.

“Communications across Kent have improved significantly in recent years and the area is particularly popular, not only in terms of the property market, but with both domestic and international tourists with its proximity to European transport links and to the Heritage Coast. There is such outstanding variety and opportunity within Fort Borstal and we are anticipating a very high level of interest from across a wide spectrum of potential buyers.”

Viewings for Fort Borstal are strictly by appointment through Savills.