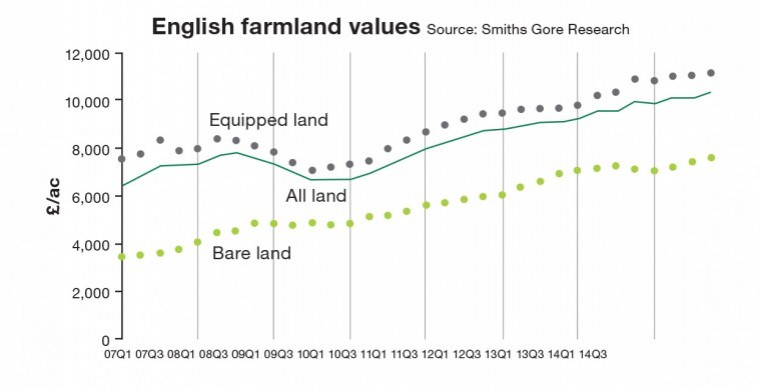 In 2014, the value of farms with houses and buildings, known as equipped land, rose by 2%, so a slower rate of increase compared with the 12% gain in 2013. This weaker growth was due to buyers becoming more discerning about the quality and type of land that they will buy. Pre 2014, there was strong demand for land of all qualities and buyers would bid above asking prices to ensure that they were successful. In 2014, farmers aimed for high quality land, there were fewer bidders on lower quality land and buyers actively avoided farms with large farmhouses that could be costly to maintain. So the driver of the market switched from strong demand, fuelled partially by low amounts of land to buy, to weaker and more discerning demand.

The value of bare farmland, with no houses or buildings, rose by seven per cent in 2014 to an average of £7,600, after a two per cent increase in the final quarter. Demand for bare land in 2014 was almost entirely from farmers, rather than from lifestyle buyers or investors and it remained strong, especially for arable land which rose by 6% in 2014, compared with grassland which rose by 3%.

“2014 continued farmland’s strong rise in values that started before the recession and has continued since 2009, which has made land one of the best performing assets of the last five years. Both bare and equipped values have now increased for five consecutive years, with equipped land values rising by 54% since 2010, from £7,200 per acre, and bare land values rising by 58%, from £4,800 per acre,” says Dr Jason Beedell, head of research at Smiths Gore.

Demand continues to outweigh supply, which drives continued price rises. In particular there is unsatisfied demand for larger arable blocks, and our agents are seeing a premium being paid for larger blocks of land. There were 18 properties over 750 acres marketed in 2014, which is a small number of large farms nationally, but is actually more than in 2011, 2012 and 2013, when 15 were marketed in each year.

The 2015 market has begun in a similar vein. While other national farming publications have reported a fall of around 30% in publicly marketed land, this appears to have been compensated by an increase in the number of off market land available. In part this is fuelled by a perception that the market is so strong that advertising is not required, and the reported increase in interest for agricultural investments from non farming buyers. Already this year significant blocks or arable and fruit land across the South East have been offered for sale off market to those known to be well-funded and seeking commercial blocks of land.

The outlook for the land market remains strong, particularly for let or vacant possession parcels of bare arable land, which are increasingly sought by investors who do not want to tie up significant capital in bricks and mortar, and wish to reap the benefits of available tax reliefs. Similarly there remain a number of well funded farming buyers within the market who are seeking to roll over gains from development land by purchasing additional farmland for their farming businesses.

The outcome of the general election has the potential to impact the market in the medium term, particularly if entrepreneurs relief or agricultural property relief are reduced or eliminated, although at the current time this appears unlikely. Further ahead, the potential for a referendum on European Union membership could also create uncertainty around the likely agricultural subsidy regime.

For the time being however, the market remains strongly buoyed by a continuing low supply in historic terms, strong appetite from farming and non-farming buyers, and broadly stable commodity prices. Vendors must be mindful however, that an apparent move back to non farming buyers, will result in transactions based more on cold and logical business decisions than emotive personal choices and this dynamic will continue to foster a more discerning market in 2015.