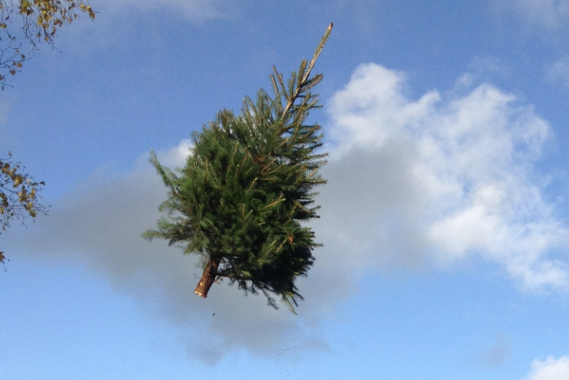 All those sheep turning and bale stacking skills you’ve acquired over the years are finally going to come in useful after a village in Staffordshire is to become the first in the country to host an official Christmas Tree Throwing Competition on their farm later this month.

Already a popular ‘sport’ in southern Germany, the contest will see its UK debut at Keele Christmas Tree Farm in Newcastle Under Lyme.

The brains behind the festive challenge is teenage entrepreneur Charlie Reynolds, who took over ownership of the farm’s tree business three years ago.

At 19, he has gained the respect of his tree-growing peers, and recently took part in the British Christmas Tree Growers Association’s national competition which selects a grower to deliver Downing Street’s tree for the season.
Unlike Germany’s model for the throwing competition, Charlie’s contest will take place before Christmas, with a weighed and measured Norway Spruce being provided by the organisers.

Competitors will be judged for how tall a throw they can achieve, and how far.

“I sold my first Christmas tree at the age of 10, so the whole business is very much part of my life and I’m constantly trying to think of ways to get people to consider real over artificial trees,” Charlie said.

“In Germany they’ve been running a competition just after the main festive celebrations for about eight years, and always ask people to turn up with their old trees.

“I decided I’d rather we provided the tree and got people to come at the end of November, just as people start to look forward to the season.”

Charlie and his team of staff will be offering each plucky thrower a 6 foot tree, weighing approximately 10kgs. Contestants will then be asked to throw across a carefully mapped course, with the winner being announced at 6pm on the Sunday of the competition weekend.

There is no entry fee to take part in the challenge, but Keele Christmas Tree Farm is a long-time supporter of Help for Heroes and is encouraging donations.

“Several of our staff have served in the military so Help for Heroes is a charity we’ve been fundraising for for a number of years,” Charlie said.

“We want this to be a day of fun for families, and hopefully it will become an annual fixture that not only makes more people appreciate the 365 day a year operation that tree growing is, but will also raise some charitable money and put lots of people in a festive mood.”

Harry Brightwell, secretary for the British Christmas Tree Growers Association, said: “We encourage all our member growers to be enterprising in terms of how they encourage people to learn more about British grown trees, and get them to visit the many farms and retailers across the country.

“We wish him the best of luck with the debut of the contest.”