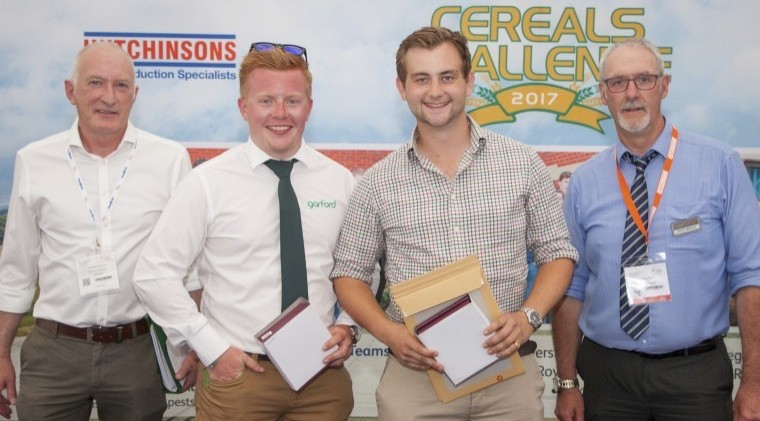 Taking second place were Harper Adams University, who also claimed the prize for the Communications Challenge, whilst the team from the Royal Agricultural University took third place.

Winners Writtle were presented with the prestigious Cereals Challenge trophy and £1000 prize money to share, plus an additional £500 for the college, by David Hutchinson, Hutchinsons chairman, at an awards ceremony during the Cereals event.
Back in February, eight teams representing universities and colleges from around the country, were offered the choice of growing a virtual crop of either a high yielding feed barley on heavy soil in a black-grass situation, or a moderate yielding malting barley on sandy soil with moisture limitations, explains Paul Hobson, of Hutchinsons.

The team from Writtle opted to grow a light malting barley, after sugar beet, on the Suffolk brecks due to its proximity to malsters. ” We felt that it was worth aiming for the premium, so opted to grow Octavia as it has a robust disease profile, is approved for brewing and distilling, with low grain N, and were confident that we could manage weed control fairly easily in this situation, as we did not have to contend with blackgrass,” says team captain Oliver Martin.

“We are thrilled that we made the right cropping choice and have learnt a lot along the way. Taking part in the Cereals Challenge has definitely broadened our knowledge of what is involved in growing a profitable crop within the constraints of the scenario and season, and really given us an insight into the decisions that agronomists have to face on a regular basis throughout the season.”

Judged by Keith Norman, technical director at Velcourt, and Dick Neale, technical manager of Hutchinsons, the final results were based on each team’s agronomic recommendations (evaluating their appropriateness and timeliness for each recommendation) and input cost management.

Dick Neale puts down the Writtle team’s win to providing the most accurate and justified recommendations, and ultimately this was the crop that would have been the most profitable of any if it were really being grown, he says.

Keith Norman underlined the importance of experience such as the Cereals Challenge for young people considering careers in farm management or agronomy to understand the value of good technical information and a agronomic advice in crop production, against a background of increasing pesticide resistance, regulation and a likely decrease in support beyond 2020.

Set up as a joint initiative between Hutchinsons and Velcourt to offer an insight into careers in agronomy or farm management, the Cereals Challenge has proved a success in its seven-year history with six students joining Hutchinsons successful Agronomy Foundation Training Programme, whilst Velcourt has taken on seven students into its management training scheme, four of whom are now managing their own farms.

For the first time this year, the Cereals Challenge incorporated a Communications element, reflecting the importance of being able to communicate technical issues either as an agronomist or farm manager. Teams were asked to write a news style piece suitable for publication on a farming website, based on their fertiliser recommendations.

The team from Harper Adams University team won the prize of £400 and will also have the opportunity to meet with Farmers Guardian publishers Briefing Media, to find out more about what is involved when writing for the press.

Judge and GAJ representative Jamie Day, said, that the piece from the Harper Adams teams was a clear winner in terms of style, layout, the summary table and meeting the brief.