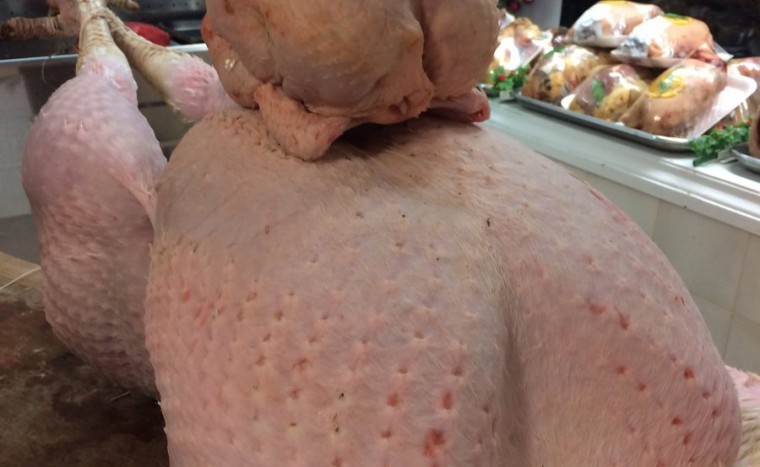 The turkey was bought by a hotel owner from Sussex at the South Eastern Prime Stock Winter Fayre in Ardingly.

Butcher James Conisbee said: “We were pleasantly surprised by how much it made. A turkey that size would probably retail for £100 and sell at wholesale for considerably less.”

R.A.B.I stands to receive £900 because Duffields Animal Feeds have promised to match the sum raised at the winter fayre auction. The Duffields Group produces around 250,000 tons of feed products per year for the ruminant, pig, poultry and game feed sectors.

The Royal Agricultural Benevolent Institution (R.A.B.I) has been helping people from the farming sector in financial need since 1860. R.A.B.I gives out grants of around £2m per year and is increasingly doing more for working farmers, affected by such things as illness, accidents, animal disease or floods.

F Conisbee & Son is the oldest family butchers in Surrey, based in East Horsley near Guildford. Established in 1760, the firm is currently run by the ninth generation of the Conisbee family. Most of their meat comes from their own farm.

This Christmas, Conisbee & Son will rear around 4,500 turkeys in barns, providing lots of space and natural daylight. The birds are fed natural ingredients too and can sleep when it’s dark too because the sheds are not lit 24/7. This encourages quicker growth but, by any standards, James says a 65lb bird is ‘massive’.

“Being a trade charity connected to farming we like to support charities such as R.A.B.I,” he added.