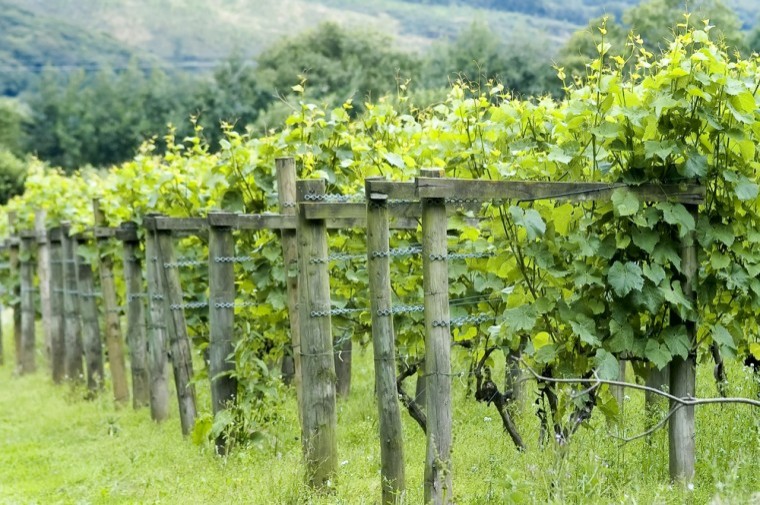 Controlling weeds in vineyards is a cinderella aspect of commercial grape production, according to specialist agronomist Chris Cooper, who is not only one of the vine experts in Hutchinsons but is also the technical advisor for the United Kingdom Vineyard Association (UKVA). He explains that there is no single best practice, but good site preparation pre-planting is essential, or your vineyard may end disastrously flooded.

There are generally three methods of achieving a weed-free strip under the vine, explains Chris:

a. Use of herbicides
b. Use of cultivations
c. Use of mulch

Presently there are two residual herbicides approved for use on outdoor grown wine grapes, Flexidor (isoxaben) which needs a partner product and is due to undergo re-registration soon, when it will lose its wine grape approval in the UK. The second herbicide, Kerb (propyzamide) has to be applied between October and end of January.

For total weed control using contact herbicides, diquat has now got an end date for UK use, (which is in 2019). Glyphosate is under review, Roundup Biactive is being re-registered in the UK but the EAMU for wine grapes will be lost in 2018 (however Roundup PowerMax is fully approved for use on wine grapes). For more specific contact herbicides there is Fusilade Max (fluazifop-P-butyl) which will control certain grass weeds and Shark (carfentrazone) which will control a narrow spectrum of weeds. Its primary use is as a desiccant for grapevine “water shoot” control. Ask Hutchinsons for further specialist advice in this area.

The use of cultivations; mechanical hoeing is gaining popularity in vineyards; its key advantage is that the regulatory authority cannot withdraw this method of weed control. It is effective particularly on fairly level surfaces, but on slopes, it runs the risk of increasing soil erosion of good top soil, and if it rains soon after the cultivations are finished, weeds can re-root. Regular, routine cultivations are required in season with its environmental and cost associations.

Synthetic mulches are normally plastic, either perforated as Mypex or unperforated as sheets of UV stabilised polythene. Mypex is relatively expensive, but allows water to infiltrate and, if required, granular fertiliser can penetrate into the rooting zone,too. Solid plastic sheets are cheaper but water can build up in the soil below, especially if the soil wasn’t in great condition to start with; it keeps the soil cold and more anaerobic than ideal, with expected consequences of making aeration and fertiliser application difficult. However biodegradable plastics are being developed and are already in use for certain crops, presently a few years away for vines, reports Chris Cooper of Hutchinsons.

With mulches, weeds/ grass can encroach from the alleys, eventually matting over the plastic and the polythene will eventually degrade due to environmental and/or mechanical damage leading to patches of weeds and shredded plastic. The grass/weeds will then need to be chemically controlled with the plastic being removed, pieces of plastic blowing around are not environmentally acceptable.

Organic mulches can be used. Green waste is the most common and is widely available. Ideally this should be made to the PAS100 standard which sets minimum standards for things such extraneous material and minimum holding time at a set temperature, so effectively pasteurising the compost. The better companies will provide a batch analysis of the nutrients contained within the compost. There is a 50t/ha annual limit and waste exemption licences must be obtained from the Environment Agency.

Alternatively there is green waste from anaerobic digesters. This is similar to green waste but requires a PAS110 minimum standard. Otherwise the process is the same as for green waste. This is not frequently used at the present time.

Presently growers in the UK adopt a combination of these methods, but as the UK wine grape industry develops and expands, there will be further modifications and integration of these techniques, says Chris Cooper.