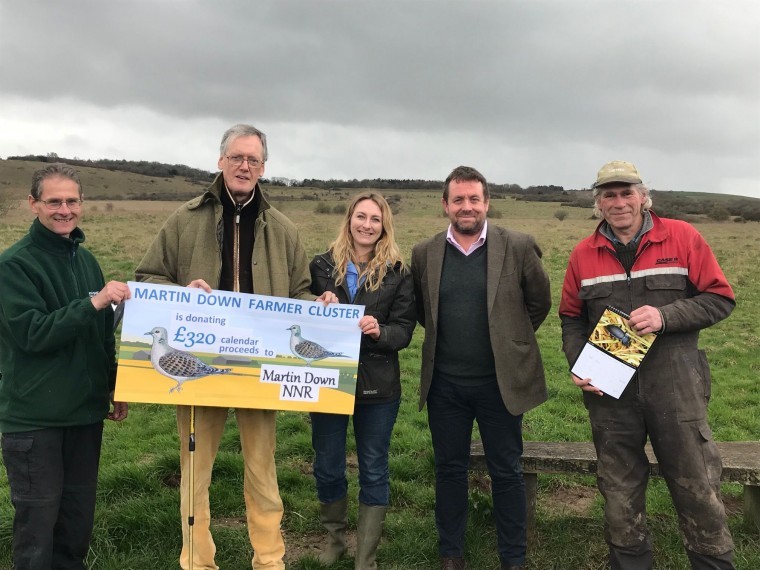 Those in the Martin Down Farmer Cluster, on Cranborne Chase, raised £320 from the sales of a wildlife-themed calendar they created.

The money will cover the cost of fencing materials which will surround the pond and cover the general maintenance needs as it hasn’t been used for the past 25 years.

The Hampshire Countryside Service is starting the work in the next month and hopes to get the pond thriving again in a few weeks.

Once complete, it’s hoped the turtle doves will start nesting in the scrub nearby, as they will have somewhere to drink fresh water from.

Last year there were 18 pairs recorded in the Martin Down area, and it’s hoped that coordinated conservation efforts between the reserve staff and neighbouring farmers will lead to an increase in numbers.

Farmer Derek Woodvine came up with the idea to produce the calendars.

He said: “One day, it suddenly occurred to me that we have all these wonderful images of wildlife we’ve captured in the area so why not make the most of them and make a calendar.

“We sold the calendars for £8 each and are delighted with the amount we’ve sold. It’s been a great success for everyone involved in the cluster.

“Let’s hope we continue to see our wildlife flourish in the area.”

The Martin Down Farmer Cluster was formed in the Cranborne Chase area of Dorset and Hampshire in 2016 and is one of three Farmer Clusters surrounding Martin Down National Nature Reserve. Together, this ‘supercluster’ cradles the nature reserve, covering an area of 236 km2.

Some 43 farmers across the three clusters have united in their aim to protect and enhance the iconic and threatened wildlife of Martin Down. Their priorities include turtle dove, hedgehogs, harvest mice, arable flora, bumblebees, soil organic matter and chalk downland links.

Jess said: “The calendar is a great way to show off the fruits of the farmers’ conservation efforts, and we’re delighted that it has raised awareness of the project amongs local villagers and raised some funds for the turtle dove pond on the reserve.”

“It may not seem like a lot of money, but it’s the message that’s important: farmers in the driving seat, working closely with others so that we can conserve wildlife on a landscape scale.”

The images on the calendar depict the wildlife found in the area including butterflies, beetles, lapwing, deer, wildflowers, yellowhammers and bumblebees.

To find out more about the work of Farmer Clusters, visit www.farmerclusters.com