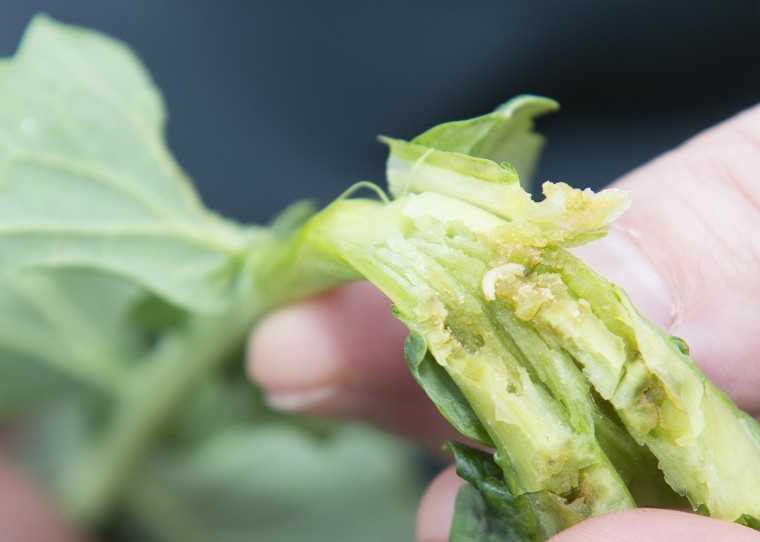 In December 2013, the European Commission suspended the use of three neonicotinoid pesticides – clothianidin, imidacloprid and thiamethoxam – used against CSFB because of concerns about their impact on bees.

Since then, scientists at ADAS Boxworth in Cambridge have done two surveys which found limited damage caused by the adult beetles as a result of the loss of the pesticides. The damage was most serious in an arc of counties to the north of London such as Buckinghamshire.

Now ADAS Boxworth is finishing another survey of the CSFB larvae – rather than adults – covering 2015/16 which will be available later in the winter. This follows the first larvae survey published earlier this year covering 2014/15.

“For the latest survey, we saw even more larvae than we did last year,” said Dr Sacha White, a research entomologist at ADAS Boxworth. “Last year we saw some relatively high levels of larvae with more than 25 larvae per plant in Cambridgeshire. That is a huge number of larvae when you bear in mind that the threshold for spraying is five per plant.”

This year in the same county, the numbers are even higher. “T-shirt weather in December meant lots of eggs hatched through the winter,” Dr White explained. “I spoke to a number of growers who looked at their oilseed rape crops in December and thought they were through the worst of it. But in January and February they just saw fields disappear.”

One observation from the new study shows how much there is still to learn about CSFB behaviour. At harvest this year, there were less adult beetles than growers expected after the invasions by local populations of larvae. “We saw the adults in the grain trailers and stores, but not in the numbers we would have expected,” Dr White said. “In some case, they were fewer in number than last year. Perhaps those adults moved out of the crops before harvest – but we just don’t know enough about what the adults do once they emerge.”

In the 2014/15 survey, CSFB larvae were monitored using plant dissection at sites in Bedfordshire, Cambridgeshire, Hampshire, Hertfordshire, Suffolk and Surrey.

The survey assessed the impact of CSFB larvae and the measures used to control them on the winter oilseed rape crop in selected areas of England.

Larval populations above the treatment threshold (more than five larvae per plant in late October/early November) were found in all counties except Surrey, with the largest population in Cambridgeshire. Larval populations were generally related to adult feeding damage during crop establishment with large differences between high and low risk sites in Bedfordshire, Cambridgeshire and Hampshire.

Pest pressure was fairly uniform between high and low risk sites in Hertfordshire, Suffolk and Surrey. Most of the larvae were found in the petioles rather than the stems in both February and April. The presence or absence of leaf scarring provided a reliable and easily identifiable indicator of larval infestation.

CSFB control relied on pyrethroid insecticides at the sites monitored. Their effectiveness against CSFB adults was mixed and at many sites they were unable to prevent the build up of larval populations.

At nine out of 12 sites for which historic yield data were available, the 2015 OSR yield was lower than the five year field average yield. The average yield reduction was 0.52 tonnes a hectare and the average yield across all sites was 3.5t/ha. The larval populations did not have a clear effect on yield, although a general trend for decreasing yield with increasing larval numbers was found.

Pictured: The immense numbers of Cabbage Stem Flea Beetle larvae being found in this season’s OSR pose a double whammy threat to current crops – the damage to leaf petioles and decaying leaf matter that creates an easy entry point for Sclerotinia; plus the lost leaf area will compromise plant performance and yields. James Southgate of Syngenta highlights how Amistar applications now could help protect against Sclerotinia infection, and ensure the remaining leaf is kept green and healthy for as long as possible, to drive yields and oil content of seed. And, to add a triple whammy warning, the high numbers of larvae now are likely to mean large populations of beetles in the field in the autumn. There is little or nothing that growers can do about that now, but they may need to consider actions for the autumn for establishing next season’s crop.

Read more stories on this