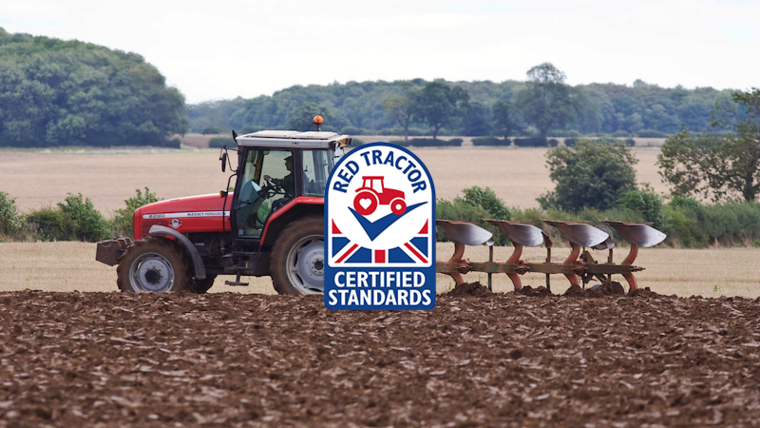 Red Tractor this year opened the process to its 46,000 members and the entire food supply chain, describing it as “the biggest and most transparent consultation ever”.

Red Tractor’s CEO Jim Moseley said: “Our standards need to achieve two key objectives – first to meet the needs of consumers who expect high standards but shop keenly on price, and second to provide farmers and the supply chain with manageable standards. Getting that balance right then also satisfies the needs of food businesses and government.”

Charlie Edgley, whose family business is based at Kensham Farms, High Wycombe, is, on balance, a fan of the Red Tractor scheme. “Most of their standards are pretty good though some can be tedious. These changes seem sensible to me, though,” he commented.

“The first doesn’t apply to us, but it makes sense. If you are going to get any contamination it will be for putting grain into a building previously used for livestock.

“Making the health and safety focus relate to all farms has to be a good thing, but there is more we should be doing on health and safety as farming remains very dangerous. We pay the NFU Mutual a lot of money for our policy and they do a good job, but we end up with a lever-arch file holding a three-inch stack of paperwork. What farms really need is a simplified, cut-down version of that policy that all staff should have with them at all times..

“I also think the industry needs to think about third party accreditation. It’s easy to insist on a health and safety policy but someone needs to check it is fit for purpose.

“Any change that makes sure people use rodenticides carefully and stops them spreading to other wild animals has to be welcomed. Although we have two members of staff qualified in pest control, we are moving more and more towards trapping rather than poisoning as we find it is a much safer approach.

“Allowing moisture meter calibration on farm will no doubt be welcomed by many farmers, but personally I enjoy the opportunity to take my equipment to a clinic and meet and chat to other farmers. I also like having a certificate from an external body.”

Frank Langrish, who farms near Rye in East Sussex, is less impressed with the changes and questions the need to continually uprate the standards, “especially,” he added, “as the government is doing trade deals with countries that could never comply with our existing standards”.

He added: “Red Tractor was set up by the NFU at a time when many supermarkets and retailers were in a race to differentiate their suppliers. To give farmers the opportunity to supply these retailers a code of practice was agreed, together with the Red Tractor standards. It has always been voluntary and only farmers who sell direct to the retailers bother to become members.

“Most small outlets, local butchers/wholesalers aren’t assured and have no need to be, possibly because people tend to trust local suppliers more than large supermarkets. Red Tractor inspections have become increasingly arduous and pernickety and the new standards are in the same vein.

On tethering, Frank commented: “Large numbers of cattle are still tethered in Europe. In my distant youth we kept milking cows in a cowshed where they were chained up all the winter; they were the happiest and best looked after cows I can ever remember!”

He went on: “Bovine viral diarrhoea (BVD) needs to be eradicated but I am not sure this is the way to do it as many of the breeders will be selling store cattle and have no need to be with Red Tractor. Financial help with testing and drawing up an eradication plan would be more useful.

“Health plans are a positive idea, but the issues affecting the production on a farm need to be accurately identified. Nutrition and blood tests to check trace element deficiencies and an overview of calving intervals etc are all important, but having a vet review the plan annually will achieve very little. It will probably be the student vet who is sent out to do the farm review, sign off the health plan and charge several hundred pounds for doing so.

“Medicine training may well be a good idea but will presumably be another cost. Would it not be better for the vet who signs off the health plan to train the farmer or appointed person in the correct use of antibiotics as they will be having to provide the prescription anyway?”

South East Farmer correspondent Alan West was even less impressed by the changes, commenting: “There seems to be little in the new Red Tractor standards that will impact on the majority of lamb producers. For many, particularly smaller producers, the benefits accruing from scheme membership simply do not justify the additional costs and time commitment involved, and these proposals do nothing to alter that situation.

“There is significant anecdotal evidence from some producers that the scheme is becoming an increasingly bureaucratic, box ticking exercise, and this does nothing to allay those concerns.”

Monica Akehurst, South East Farmer correspondent and mixed family farmer on the edge of the High Weald, pointed out that animals were rarely tethered in the UK outside agricultural shows.

On eliminating routine euthanasia of calves, Monica said: “Morally, this has to be right, and it is already a requirement from some milk buyers, but in certain circumstances it could be tricky, for instance if your farm is placed under TB restrictions and you are unable to move animals.

“It may also be necessary on welfare grounds, because of a lack of food or space or in the case of dairy farms located on, say, the Isle of Wight, with limited access to markets. There may be a strong economical case, and while it could be argued that sexed semen is available, this is at a cost.”

While Monica pointed out that most farmers already produce a health plan in conjunction with their vet, she added: “Perhaps these officials that dictate the mountains of paperwork farmers need to complete should consider a ‘farmer health plan’, since the extra pressure of getting the paperwork right takes its toll.”