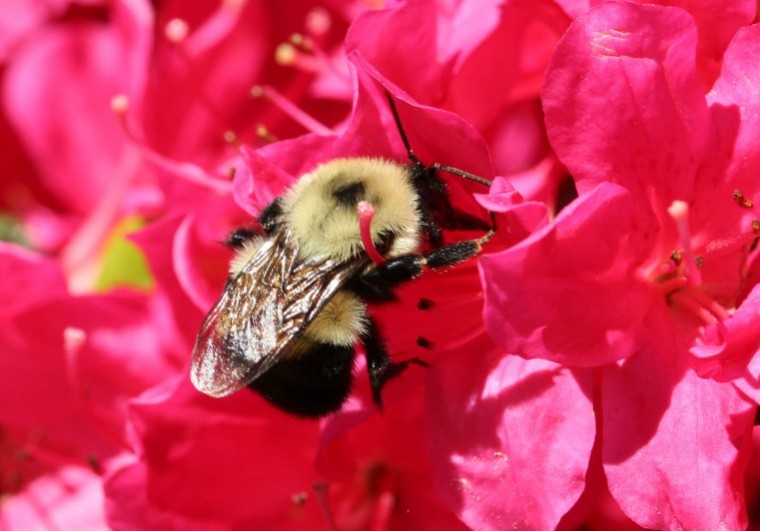 Climate change and habitat loss have hit insects such as bees, moths and hoverflies so hard that researchers at the University of Reading and the Centre for Ecology and Hydrology based in Oxfordshire are warning that farmers and growers could lose some crops.

The findings are based on what is thought to be the biggest analysis of British wildlife ever conducted, with researchers looking at records covering 4,424 species, collected between 1970 and 2009. Among species considered pollinators – such as bees, moths and hoverflies – 28% are in decline, while 16% of those that act as natural pest controllers, such as ants and ground beetles, have witnessed significant losses.

Although some native species are increasing, along with some new species that have appeared in the UK, they do not offset the losses caused by the drop in wildlife doing pollination and pest control.

Wildlife, trees and plants were analysed according to five functions they performed in the ecosystem: pollination, pest control, decomposition, carbon sequestration and species often recognised as being of cultural value, such as birds, butterflies and bees.
Dr Tom Oliver, an ecologist at the University of Reading who led the study, said that continued losses among wildlife would lead to significant rises in the price of food, with some crops likely to become unavailable.

“Under current trends we are moving towards the loss of species and the ecosystem functions that are vital for human wellbeing, especially pollination and pest control,” he said.

“We need insects to pollinate our crops – we can’t do it by hand – and if we lose natural pest controls, less food will be available. If we lose those functions, the crops we eat won’t be able to be pollinated so the price of food would go hugely up and we wouldn’t be able to eat certain foods such as fruits including strawberries, raspberries and apples.”

Dr Oliver warned that further declines in biodiversity driven by intensive farming and urbanisation could lead to “potentially catastrophic and irreversible impacts on human wellbeing. Climate change would be much more rapid, we would struggle to find food and would be knee deep in waste. We can either carry on the trajectory we are on and face huge costs in the future and potentially catastrophic impacts on human wellbeing, or we can pay costs now to mitigate those impacts,” he said.

The research builds upon on evidence collected in the 2013 landmark state of nature report, which analysed fewer species but over a longer period of time and found that most UK species are in decline and that one in 10 are at risk of extinction.

Conservation organisations responded to the findings two months ago by calling on the government to produce a long term strategy for how it will offset the impacts of decades of intensive farming and building on nature, including the effects on human health.

Paul Wilkinson from the Wildlife Trusts, which helped to compile the state of nature report, said: “This latest shocking barometer of the state of our natural environment highlights the urgent need to halt the loss of our precious wild heritage for its own sake, but also for our future prosperity and survival.”