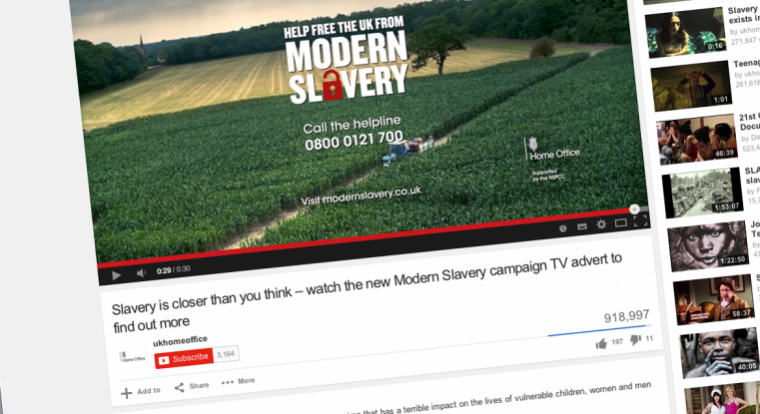 NFU president Meurig Raymond has written to the Home Office saying the union was “shocked” to see images of workers on what appeared to be British farms in a television advert alongside images of sexual exploitation in a brothel and domestic servitude in a home.

NFU South East regional director William White took up the issue at the National Fruit Show, pointing out that the number of potential victims of forced labour in farming during 2012 were lower than in other industries such as block paving and tarmacking.

Their concern followed an article in the August edition of South East Farmer which highlighted comments from the Association of Labour Providers (ALP) and the Gangmasters Licensing Authority (GLA) at Fruit Focus in Kent. ALP director David Camp warned then that during 2012, 29% of the potential victims in forced labour cases happened on farms and in food processing businesses.

In his letter, Mr Raymond said the NFU should have had advance warning that British farms were going to be depicted in this way. “It is incredibly damaging for an industry which works to safeguard the conditions of workers employed through gangmasters to be included in an advert like this alongside the trafficking and forced labour of women in prostitution,” Mr Raymond added.

In response, Karen Bradley, Home Office minister for modern slavery and organised crime, said agriculture was used in the advert because “we wanted to show that exploitation takes place in a wide range of settings, and we know that this includes agriculture.

“The scripts for the advert were tested with partners including the GLA, who confirmed that the agriculture scene was an accurate portrayal. To ensure that the setting and imagery were accurate, we also used visual references from actual cases of labour exploitation sourced from the GLA, the police, the National Crime Agency and the media.”

Despite the exchange of letters, the row has not died down. Meetings have been held between the GLA, Home Office officials and the NFU at the union’s Stoneleigh headquarters. The offending film is still up on the Home Office’s modern slavery website, and shows workers in a freight container being woken by what appears to be a farmer as well as disgruntled workers being driven through a maize field in a trailer.

In the latest twist, Clive Aslet, editor at large for Country Life magazine, wrote an article for The Telegraph newspaper headed “Modern slavery: dark secrets of rural Britain,” apparently in association with the Home Office. In response, Dr Chris Hartfield, the NFU’s acting chief adviser on horticulture and potatoes, wrote another letter saying the article “blows the important issue of forced labour in agriculture completely out of proportion.”