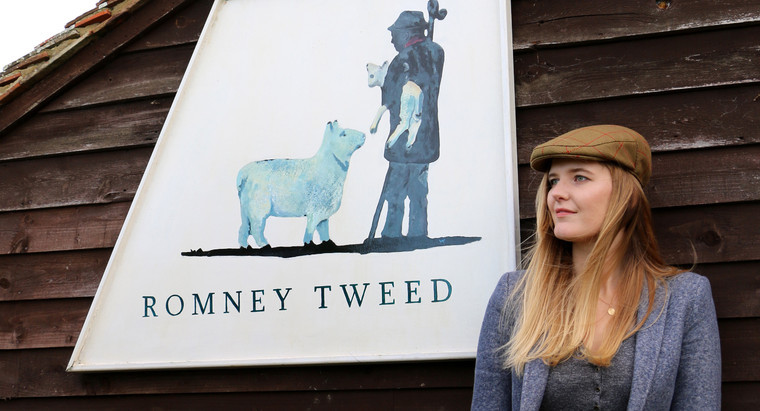 With the launch of a new collection imminent, Romney Tweed is going from strength to strength, but despite the success of the product, the team behind it is desperately looking for new premises in which to develop its community-focused operations.

Set up by Pat Alston and husband Robert – a former British High Commissioner to New Zealand– in 2014, Romney Tweed is a Community Interest Company, or CIC, with the twin aims of helping young people acquire skills and find work and spreading the word about weaving and textiles.

Pat explained: “We live in Romney Marsh near Dungeness, and when the power station at Dungeness was decommissioned in 2011 it was a major blow to the economy. We found that fleece from the local Romney sheep could be used for fine worsted cloth as well as for carpets and blankets, and so we decided to set up Romney Tweed.”

Although designed locally, the tweed is woven at a mill in Yorkshire and proved an immediate success when a collection of Romney Tweed designs was marketed in Savile Row and elsewhere.

“It took a lot of research by experts in Yorkshire but the end product was a really nice Worsted cloth and we were delighted with the reception it received in the industry,” explained Pat.

Romney Tweed is a licensee of British Wool, which means the wool is not just sustainable but traceable back to the individual flock. “The last batch of Kent fleece we bought through British Wool was possibly the finest and whitest I have ever seen,” she commented.

In 2018, Romney Tweed moved into a granary in Old Romney, where it was able to store equipment and run weaving courses and host its design and sales operations led by weaver Rosie Green alongside Sara Roberts.

That new home is no longer available following the upheaval caused by Covid-19, which means the charitable venture is now on the lookout for a new base in which to continue its work. “We are looking for somewhere local, with a bit of heritage and growth potential,” said Pat. “We would love to hear from farmers or landowners with the right kind of space.”

A new home would allow Rosie’s courses and Sara’s shop sales to restart and would also allow the venture to accept the offer of two free looms from Manchester University. “It’s a generous offer and the looms would be really useful to us, but at the moment we simply have nowhere to put them,” Pat said.
Romney Tweed also works with schools, teaching youngsters about textiles and about the Romney sheep whose fleeces are used to create them. “From fleece to fashion,” Pat explained.

“We have come a long way since we set up Romney Tweed but this is just the start of the journey,” she added. “We want to create jobs, teach people new skills and support the local economy by working with the fleece from the Romneys that have been such an integral part of the landscape for the past 1,300 years.”