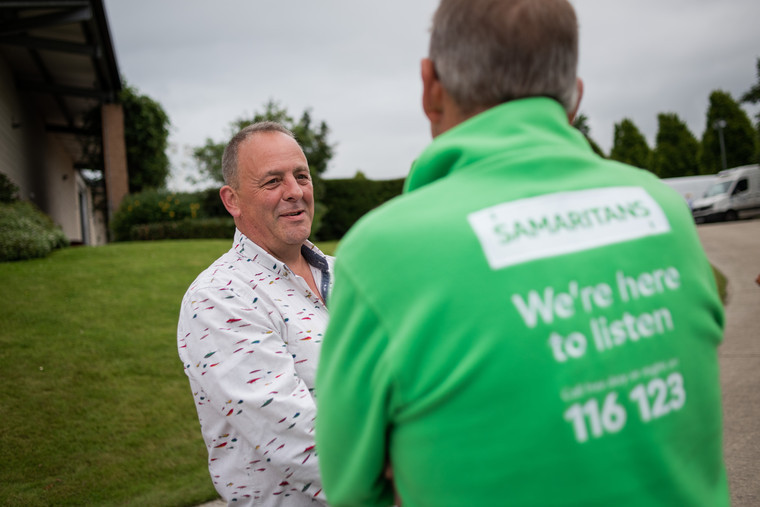 The findings come as Samaritans launches a new phase of its Real People, Real Stories campaign, supported by the NFU Mutual Charitable Trust, which aims to reach men in rural communities who are struggling to cope to prevent them reaching crisis point. In the UK and Ireland, men are three to four times more likely to die by suicide than women.

Two thirds of men living in rural areas (66%) also said there are a variety of factors that would stop them reaching out for support even if they were struggling. Samaritans discovered the top three barriers are stigma around mental health (18%), not knowing who to turn to (15%) and lack of awareness of support available (15%).

As evidence suggests that suicide rates are higher in rural areas compared to urban areas and rural-based occupations, such as those in agriculture, have also been shown to have an increased risk of suicide, the UK’s leading suicide prevention charity is raising awareness amongst men in these environments to let them know they do not need to face things alone.

Michael Brown grew up on a farm and has gone on to run his own agricultural business. After he attempted to take his own life, Michael’s community rallied round him, and he realised he was not as alone as he had imagined. He now dedicates time to tackling mental health stigma in rural communities by visiting local groups and speaking to male farmers about the importance of talking to someone before reaching crisis point.

Michael said: “Up until my suicide attempt, I didn’t think I had any problems. It’s only after getting the help I should have sought before that it became apparent that I was in a really dark and lonely place. The rural community is fantastic but there is isolation and remoteness – you don’t see anybody new, you don’t get to know what’s going on and that’s difficult because you’re not coming across people to talk to. I’ve learnt how important it really is to talk.

“I think it’s naturally harder for men to open up, particularly men in rural communities, where there is still stigma around talking about mental health. That’s why I go out and speak to men about my experience and encourage them to talk early on if they are struggling.

“Finally opening up was the start of the flood gates opening. Up to that point, everything in my head was going round so fast. As soon as you talk to somebody, your problems half. Straight away, you’ve opened up, your problem is not yours anymore, you’ve shared it with somebody. That makes life so much easier, and it makes it easier to go get additional help if you need it. It was a long, hard journey but we got through it and we go forward each day.”

This year’s Real People, Real Stories campaign, supported by the NFU Mutual Charitable Trust, aims to encourage this harder to reach group to talk to someone about how they are feeling when they are struggling to cope, before reaching crisis point. As real people with positive stories of recovery and hope have been found to be extremely powerful in supporting others who are struggling , Samaritans is sharing experiences from men with rural backgrounds who have overcome tough times to demonstrate the power that human connection and being heard can have.

Paul McDonald, Executive Director of External Affairs at Samaritans, commented: “Samaritans is here for anyone struggling to cope, no matter who you are or where you are. Mental health challenges and suicide are complex, going beyond where you live or your profession, but these can be factors. The increased risk for those living in rural and agricultural settings due to poor access to services, isolation and persistent loneliness mean it’s essential we do more to reach people in these environments.

“We hope this new Real People, Real Stories campaign will raise awareness of the support that’s out there and encourage more people to seek help early on, so we can continue the drive to reduce suicide rates across the UK.”

Jim McLaren MBE, Farmer and Chair of NFU Mutual, added: “As a farmer myself, I’m all too aware of how isolation is affecting rural communities. Feelings of uncertainty and overwhelming change have really challenged our mental health. Our customers told us that isolation, loneliness, and anxiety were on the rise, and NFU Mutual has been committed to finding the best ways to help.

“Supporting communities has always been at the very heart of NFU Mutual’s approach, and the NFU Mutual Charitable Trust is one of the main ways NFU Mutual provides charitable donations.

“We’re proud to be supporting Real People, Real Stories, raising awareness of the support Samaritans offer around the clock. Finding a safe, non-judgmental space to explore their feelings could be a person’s first step on their journey to looking after their recovery.”

As we mark two years that have been challenging for everyone since the start of the Coronavirus pandemic, it’s vital to encourage men in rural communities finding life tough to seek help by calling Samaritans for free 24/7 on 116 123 or visiting samaritans.org for online self-help tools and information.

You can find out more about the Real People, Real Stories campaign here