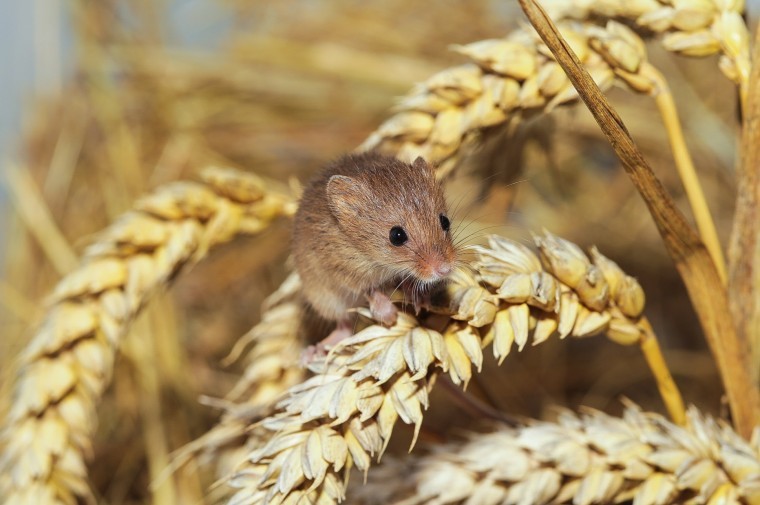 More than 472 harvest mice nests were found in 2014-2015 over 28 separate square kilometre sampling sites at Selborne in Hampshire.

Researchers hope that even more will be found as hedges are planted and wild strips are maintained around arable fields. The finding is significant as it was in Selborne that harvest mice were first identified as a separate species, by the naturalist Gilbert White in 1767.

The mice were discovered by the Selborne Landscape Partnership, which is 11 farms covering 10,000 acres of land. The Selborne farmers joined forces with volunteers to conduct surveys of field mice nests and completed work such as hedge laying, hedge planting and the maintenance of grass headlands around arable fields to create habitats. Working with the Hamsphire based Game and Wildlife Conservation Trust (GWCT) and the South Downs National Park Authority, the farms set up the Selborne Landscape Partnership.

With government funding, and support and advice from Natural England (NE), the GWCT launched a pilot group of five farmer clusters in early 2012. Today, the project has 22 clusters. Those that were not part of the original pilot group have set up voluntarily with no funding.

The idea behind the clusters is that farmers collaborate to run conservation across landscapes rather than just having subsidised green schemes on their farms. South East Farmer has already reported on the Arun to Adur Farmers Group (AAFG), which in September last year had 24 farms and estates signed up covering more than 20,000 acres.

Like the AAFG, the Selborne partnership is applying for funding from the national facilitation fund set up under the new countryside stewardship scheme to encourage groups of farmers to work for a higher standard and scale of conservation management than would be possible on individual holdings. The Selborne partnership has also had a share of £9,000 in separate funding from Natural England.

Recently, DEFRA secretary of state Liz Truss met advisers and farmers in Selborne to discuss the partnership’s progress. The group discussed how the partnership has been working to conserve harvest mice, barn owls, wildflowers and several butterfly species, including the brown hairstreak and the Duke of Burgundy.

“This approach to land management is at the heart of our 25 year environment plan, which will bring people together to work in a more coordinated way to conserve and enhance the environment,” Ms Truss said. “Without a healthy environment, we won’t have a healthy farming industry.”

How rare mice were found

Norton Farm near Alton in Hampshire was where the rare harvest mice.

In November 2014, a group of farmers with rangers and volunteers from the South Downs National Park set out to survey harvest mice on farms in and around Selborne. “We found 30 odd nests then and we went on to find a similar number nearby,” said Kate Faulkner, a partner in Norton Farm.

Before that, the Selborne Landscape Partnership had been founded by farmer William Woolmer working with Peter Thompson, biodiversity adviser at the Game and Wildlife Conservation Trust in Hampshire; and Nick Heasman, western area manager for the South Downs National Park.

On that November day, Mr Thompson – a renowned countryman – thought the mice would be somewhere. “There were very few county records of anything, but we were inspired by Gilbert White,” Ms Faulkner added. The Rev White lived in Selborne and on November 4, 1767, first identified harvest mice as a separate species after making a study in his garden and the surrounding fields.

Norton Farm is 700 acres, 500 of which are arable and there is some grassland which is let out to a neighbouring sheep farmer. The arable crops are broad beans, oilseed rape, oats and some barley. The whole farm is part of the higher level stewardship scheme (HLS) which includes grass margins around the arable fields, low impact grassland, hedgerow options, bird seed mixes and pollen and nectar wildflower mixtures. A big chunk of the farm is in the national park.

Apart from Mr Heasman, the Selborne Landscape Partnership has had help from national park rangers Rob Nicholl, Laura Deane and Chris Gurney; and Gemma Nash, who has given administrative support from the park.

The landscape partnership has been meeting and working together for 18 months, and all the farms involved are in environmental stewardship schemes, which includes HLS. The November 2014 meeting triggered a hedge laying project at Norton Farm last November, during which six farmers from the partnership were joined by the local Young Farmers Club and national park volunteers. They worked on hedgerows which had been planted over the last 15 to 20 years but had become a bit sparse round the base and needed improvement to create habitats for the mice, butterflies and birds. On the Sunday of that weekend, Rob Nicholl returned, and began surveying with 20 volunteers across the 11 landscape partnership farms. They have continued the work during the winter, and found many more harvest mice.

“The exciting thing is that this has all happened within the farmed landscape,” said Ms Faulkner. “These are not organic farms or nature reserves. People assume that this landscape is barren, but we have shown that it is not.” Now the partnership is planning how to build on its success. “We want to enable the various species to branch out from their strongholds so that if there are population crashes, there is a bigger pool of species to come back from.”