» Technology tells the public about farming 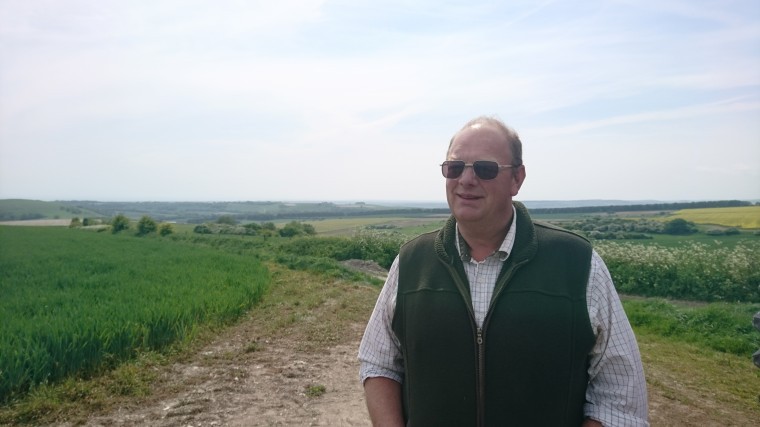 Six experimental sites in car parks on the South Downs Way will be used for the posts this summer to tell the public how the area is being farmed. “The short videos will let the public know what we are doing,” said Dominic Gardner, who had the original idea for the posts and is a contract farmer based at Lee Farm, Patching, which is the home farm for Angmering Park Estate.

“In general, the public think we abuse the countryside with pesticides and fertiliser,” Mr Gardner said. “They probably don’t know what a conservation area or a beetle bank is. They are expected to fund farming through their taxes, but they don’t know what they are paying for.” Mr Gardner moved to the countryside from a town, and is keen to pass on his knowledge to the public.

The technology is cheap and could be rolled out across the country, Mr Gardner said. It involves the near field communication on modern smart phones, which is built in and just has to be enabled. On older phones, a QR code – which is like a barcode – makes the link with a chip embedded in the posts which allows a short video to be downloaded.

In the videos, six farmers will talk about what is happening on farmland around the posts. There is a picture of the relevant farmer on the posts with some script inviting people to know more about how the area is famed. The videos will vary according to the season allowing the farmers to give advice about keeping dogs under control during lambing, for example, or describe which birds are nesting and where they are. At the end of the videos will be more information from the park authority or English Heritage, for example.

“My passion is to show that farmers are just normal people,” said Mr Gardner. “We go to the pub, we go to the gym and we go on holiday. After Brexit, we will have to communicate what we do for the public to support us.”

The videos will feature Mr Gardner and five other farmers in the Arun to Adur cluster. This is a group of 24 local farmers which has five years of funding from Natural England. “Part of the remit of the cluster is to communicate with the local area,” Mr Gardner said. The cluster supports endangered birds such as the lapwing, grey partridge and skylark – and the area is a focus for bringing the very rare Duke of Burgundy butterfly back from the brink of extinction. The cluster protects resources such as water and the many archaeological sites in the area.

The technology was paid for by the national park, the NFU and some of the estates in the area. It was shown to the public for the first time during an open day at Lee Farm on 24 June. This and the pilot project in the park will give feedback on how the public would like to use the technology. “We are at the development stage because we don’t know what the public want to know,” said Mr Gardner. “Do they want to see us talking, for example?” After this summer’s trial, the technology will be launched in earnest at the farming cluster conference in Birmingham during November.

Bruce Fowkes, farming officer for the South Downs national park authority, said: “More than ever we need people to appreciate the value of the work farmers do in the national park. The mosaic of fields and hedgerows you see in the South Downs landscapes draw in millions of people every year – but how many think about the work that goes into caring for them and the wildlife that lives here?

“It’s great to see our farmers working together and coming up with innovative ideas to tell the story of their work.”