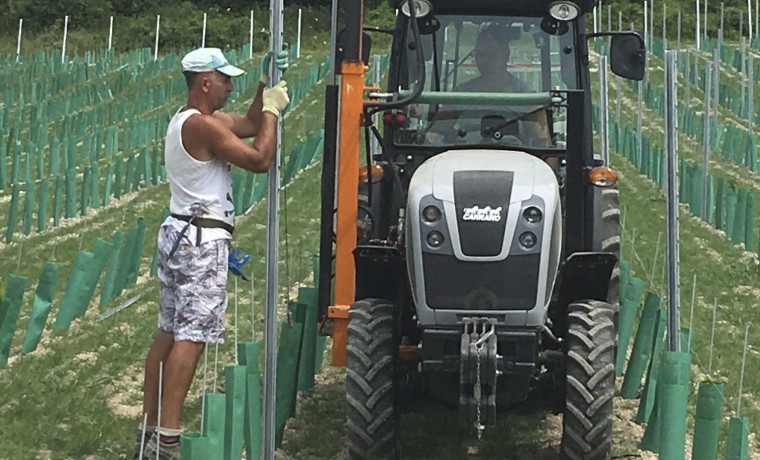 George Jessel has already started to plant a 30 acre field with vines and plans to offer the grape juice to other producers such as Chapel Down and Gusbourne to turn into English sparkling wine.

Brexit, said Mr Jessel, will encourage farmers to diversify and “stand on their own two feet.” As the government removes traditional European Union support payments, the need for farmers to find other sources of income will be even more pressing.
“I am not a wine buff at all,” said Mr Jessel, who farms about 1,200 acres on the North Downs just outside Ashford. “But if Tattinger can make a go of wine production in Kent, so can I.” Mr Jessell pointed out that he has experience of diversifying with cheese production, his wife’s hats and other businesses at Penstock Hall.

He bought the field eight years ago from someone who had been growing Bramley apples and had hoped to continue with them, but the trees were grubbed up. So this year, eight acres of vines will be planted with pinot noir, pinot meunier and chardonnay grapes. “This is a long term diversification which I will enjoy,” said Mr Jessel, who added that there is another reason for his plan. “I want to leave something for the next generation, and perhaps my 17 year old son or 18 year old daughter will take this on.”

Mr Jessel is a director of Kent Rural PLC whose manifesto we have highlighted below. He is very pro European, and voted to remain. “David Cameron should never have made the promise to hold a referendum and he has a lot to answer for,” Mr Jessel said. “But the referendum vote counts, and although I may not like it, I have to live with it.”

Despite the politicians, Mr Jessel said that farmers and growers in the South East were already trading successfully in different markets. “Look at Frazer Thompson at Chapel Down who is selling into the United States and the Berry Gardens fruit cooperative which has grown strongly in the last few years. Those are fine examples which show that there is hope for farmers to make a success of Brexit.”

At Penstock Hall, Mr Jessel is mostly arable, growing wheat, barley and oilseed rape. He has a small beef herd and about 1,000 sheep. Although he does not use migrant workers from the EU, he does not want Brexit to stop the seasonal work force coming to the orchards, vineyards and fields of the South East. “Some great relationships have been made on the vineyards and fruit farms. Workers have become team leaders and managers, and that should continue.” Mr Jessel thinks the seasonal agricultural workers scheme should return. “Farmers and growers are very good at getting on with things, and if necessary won’t wait for the politicians to come up with an alternative scheme.”

Kent Rural plc and Hadlow College have launched a manifesto to try to persuade politicians to take more notice of farming and the countryside.

With another general election likely following the Tory party’s loss of seats in June, Kent Rural – an initative promoting the value of Kent’s rural areas – is urging all parties to develop sound and relevant policies for the countryside.

“Successive governments have comprehensively failed to recognise the fundamentally crucial part played by the rural sector industries – specifically agriculture and production horticulture,” the manifesto says. “The new government must position farming and food at the very top of its agenda.”

Currently, Britain is about 60% self sufficient in food. The growth of global population combined with the detrimental aspects of climate change indicate that it is unlikely the UK will be able to continue to import food at the current rate, the manifesto says. At the same time, national population is growing, thus threatening greater imbalance. “We must increase output and produce more food. Our farmers and growers are capable of increasing production but they need government policies to help them.”

At the same time the government must make bilateral trade agreements, work with other countries to increase research, combat disease and expand output while simultaneously protecting the environment.

“The UK’s farmers and growers are immensely skilled but they are often hampered by unhelpful regulations and hindered by unnecessary documentation.”

The manifesto says the government will need to replace European Union subsidies with a system that is simpler and fairer while ensuring the safeguarding of standards remains central to policy.