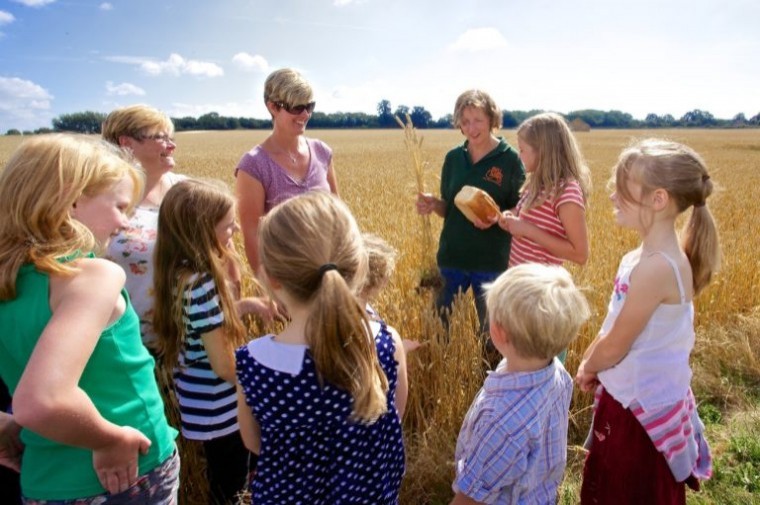 Initial estimates from organisers LEAF (Linking Environment And Farming) indicate that over 250k people spent the day at one of the 358 farms across the country that hosted an event, with many farms reporting higher than expected figures.

The twelfth LEAF Open Farm Sunday once again gave people the opportunity to discover all that farming delivers and why farmers are proud of what they achieve. Press and media attention was extensive with coverage on national radio and TV including ITV’s Good Morning Britain and This Morning, as well as in consumer media. Radio 2’s Chris Evans who interviewed dairy farmer Abi Reader on air, backed the campaign by visiting his local Open Farm Sunday event and called for more farmers to take part next year. Hundreds of regional articles helped promote individual events, with a number of BBC Radio stations interviewing local farmers or LEAF Open Farm Sunday’s regional coordinators.

This year’s visitor numbers took the total to more than 2m since the campaign launched. Caroline Drummond, LEAF chief executive said: “Once again, farmers from across the country have come together to showcase the diversity and importance of British farming. We have had another spectacular year, with visitor numbers showing a clear interest from the public in finding out more about farming. This year’s Open Farm Sunday was a day the whole industry should be justifiably proud of. We called on the public to get out and show their support for UK farmers and they did just this in their thousands.”

LEAF also welcomed its Honorary President, HRH The Countess of Wessex to the Waitrose Farm, Leckford Estate where she toured the event and spoke with staff, helpers and visitors, as well as speaking with ITV Meridian for a feature on the evening news. Caroline Drummond said “Her genuine interest and commitment to helping the farming industry connect with the public was clearly evident.”

As with previous years, the impact of LEAF Open Farm Sunday was felt far beyond the farm gate. Its Facebook page had a reach of over 280k in the month leading up to 11th June, with farmers and consumers alike sharing content and discussion about the event. Video content, including a reworking of the Old Macdonald nursery rhyme as ‘Young MacDonald’ to address public misconceptions of farming, helped create significant engagement. Many visitors took to social media after the event to share their photos and words of thanks to the farms involved, with more than 500 photos submitted to the LEAF Open Farm Sunday photo competition in less than 24 hours.

Twenty percent of farms that opened this year were in the South West with 18% in the South East. The East Midlands (13%), East of England (12%) and West Midlands (12%) made up the remainder of the top five regions*. One in four farms opening for LEAF Open Farm Sunday was doing so for the first time. Plans are already underway for next year’s Open Farm Sunday, which will take place on 10 June 2018, and LEAF are hoping the popularity this year will encourage more farmers to get involved.

Caroline Drummond said: “As the industry negotiates its way towards leaving the European Union, it has never been more important for farmers to reach out to their customers and LEAF Open Farm Sunday plays a critical role in making this happen. We’d like to say thank you to all farmers who hosted events this year, their helpers and our sponsors. Their passion and energy will go a long way to making a difference to how the public perceive farming and understand its value. We’d like even more people to have a chance to visit a farm next year.”