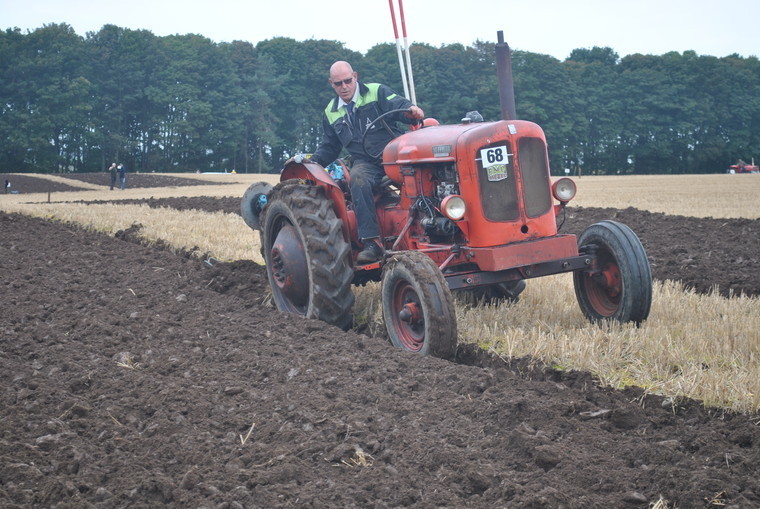 Top local ploughman Chris Cullen made the trip to Mindrum Mill, Northumberland, for the 70th British National Ploughing Championships – and did his sponsors proud.

Chris’ employers at Bell Agricultural arranged the funding that helped him make the trip, with Skelton Plant Hire taking his tractor and plough up to the far-flung venue for the event and other support provided by the NFU, McHale, Acres Insurance, Kramp and the Romney Marsh Ploughing Match Society.
He finished a creditable 19th out of 24 competitors in what was his first appearance at the national finals, and said he had thoroughly enjoyed the experience.

“It was a different class of competition up there and I was happy with my performance,” he said. “Because I work full time, I have probably only ploughed competitively four times this season – a lot of the other competitors looked like they practised regularly!” His rivals also included a number of ex-British champions, making for a tough but enjoyable time.

“We are very proud of him,” said boss Robin Back of Bell Agricultural. “He has worked with us as a technician for the past five years and is a great member of the team. We were pleased to be able to support him in his ambition to compete in Northumberland.”

Chris, from Lyminge in Kent, qualified for the Nationals in 2019, but saw the 2020 event called off because of the Covid-19 pandemic.

As well as seeing him compete in the Nationals for the first time, this season was one of his best on the domestic scene. He won the Romney Marsh match in the vintage mounted class, won the Weald of Kent match and was also crowned overall champion at that event, and won his class at the East Kent match as well as being named reserve champion.

Chris, who is 58, competes using a 1960 Nuffield Universal 3 tractor with a two-furrow Ransome TS59 plough. He was keen to thank Robin Back and all his sponsors. “I simply wouldn’t have been able to take part without their support,” he said.

Kent ploughman Chris Cullen’s debut in the British National Ploughing Championships took place during the 70th anniversary of the event, which saw thousands of people enjoy this much-loved rural spectacle.

The site at Mindrum Mill, Northumberland, covered almost 300 acres across 14 different fields and was loaned by D Harvey and Son, who welcomed spectators and competitors from all over the country.

First time plougher in the British Championships, Brian Baxter, was the winner of the reversible final with 300 points, ploughing with a Massey Ferguson tractor and Kverneland plough.

In the vintage hydraulic final, Charlie Nicklin used his Massey Ferguson 35 and Ransome TS54 to good effect to win with 258 points, while David Thomlinson retained his title when he won the classic final for the second time, driving a Ford 3000 tractor pulling a Ransome TS86 plough. Ashley Boyles was named supreme champion.