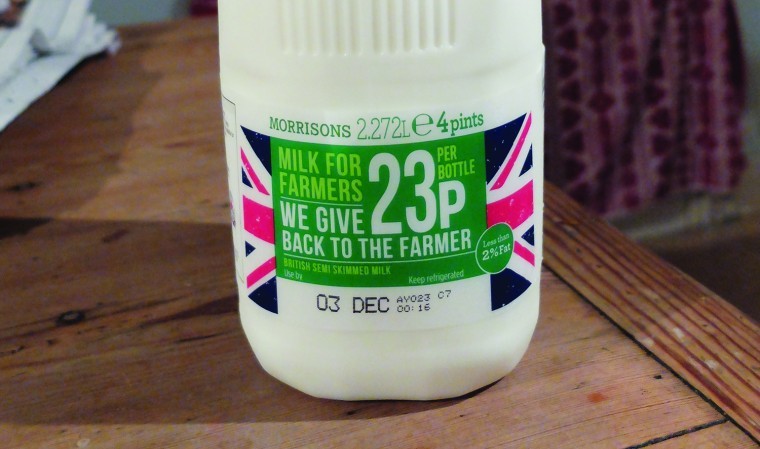 The current packaging displays a Union Jack alongside the words “we give 10p per litre back to the farmer.” Critics have said suggests this goes only to British farmers, when in fact it goes to all 12,000 farmers in the Arla cooperative throughout Europe.
This means around 3,000 British farmers will benefit, with the rest going to producers in Denmark, Sweden, Germany, Belgium and Luxembourg.

Local sheep farmer, and disgruntled buyer of Milk for Farmers products, Daryl Brown, said: “I’ve been buying the milk thinking that I was helping in a small way to support British dairy farmers so I was disappointed with the recent revelation. In reality the money which does reach those small number of British farmers who are part of Arla cooperative will make no real difference to their businesses.

“I think Morrisons have misled the consumer by branding the product with the Union Jack and by being secretive about how the money generated is distributed. The only good that can be said of the brand is that it’s higher than expected sales are surely a message to supermarkets that consumers want to support British farmers; that is the only reason why I continue to buy the milk. Morrisons now need to step up and ensure the reality of the brand lives up to the impression it creates.”

Morrisons have said they will not be releasing figures on how much they are selling but Arla has predicted the range is selling seven times better than expected.

A spokesperson for Morrisons told South East Farmer: “Currently the price that Arla pays for farmers’ milk is higher than its rivals in the UK and that is in part due to the effect of the extra money raised by Morrisons Milk for Farmers. About 3,000 farmers in the UK will benefit from these payments alongside their European counterparts.”

Morrisons brought out the milk range in August in response to protests and meetings with rural leaders over poor milk prices to offer customers the option to support dairy farmers directly.

In a statement, NFU chief dairy adviser, Sian Davies defended Morrisons, describing the labelling as a hiccup: “I don’t believe that Morrisons nor Arla went out to mislead the consumer with this campaign. It’s made complicated by Arla’s position on farmgate milk pricing and how income is shared across its membership but farmers who are members of Arla understand this.

“Sales of Lurpak in Britain benefit UK farmers even though the product is made with Danish milk. It’s widely known that Arla UK made a loss last year. But being part of a bigger Arla EU business meant that its UK members’ milk price didn’t fall to the levels it could have as a standalone business.

“Instead of pulling yet another initiative down, let’s try to encourage more of these.”