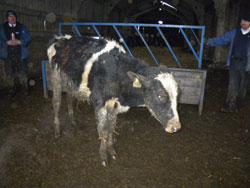 RSPCA officers were called to the horrific scene in West Layton, North Yorkshire on 25 March 2013. Live animals were found knee-deep in faeces alongside dead animals and a collie-type dog was living off the remains of a horse.

RSPCA chief inspector Mark Gent said: “It was a scene of horror of huge proportions.
“There were dead and dying animals all over the place, and some of the suffering had been going on for months.
“It is the worst case I have ever been involved with due to the sheer number of animals.
“The RSPCA had officers there for a week and it was a traumatic experience for all involved.”

Linsley was due to stand trial last month but pleaded guilty to three offences instead. He was jailed for 16 weeks for causing unnecessary suffering to 54 sheep, four cows and one dog and 16 weeks for failing to meet the needs of 310 sheep, 19 cows, five horses and one dog by failing to provide an adequate diet and failing to meet the needs of four cows, one dog and 17 horses by failing to provide a suitable environment, to run concurrently. He was also disqualified from keeping cows and equines for ten years.

In mitigation the court heard that Linsley had found it difficult to get food to the animals because of the poor weather conditions and that he had now moved to a smaller farm where he was successfully farming sheep.

RSPCA chief inspector Gent said: “The weather was poor but this situation took a long time to take hold, and we were able to get to the animals and attend to them.

“Linsley is a farmer, he is making money from animals, and he treated them appallingly.
“There can be absolutely no excuse for what happened here.”