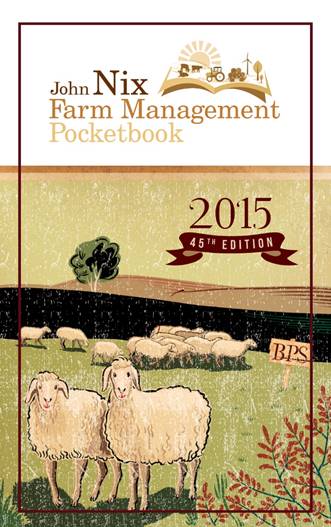 The fall of subsidy is likely to be gradual for most, but much sharper for intensive farmers in Wales and Scotland. Gradual or not, the changes to subsidy and the regulatory requirements that are associated with it are a challenge to all UK farmers from 2015 onwards.

In his foreword, author Professor Nix adds: {pull-quote}“Revenue from the market and income from diversification will therefore become increasingly important to each business as will cost control.”

The newly published Edition of the Pocketbook spends an entire chapter dedicated to the changes in the farm subsidy regime as it turns into the Basic Payment Scheme. It describes in practical terms what it means to the farmer with explanations of what claimants need to do and estimates the changes in subsidy receipts. England, Scotland and Wales are all discussed individually.

Other changes such as the rise in persistent grass weeds like Black Grass and Sterile Brome in arable rotations is causing major problems to many farmers growing cereals. The lack of effective and inexpensive herbicide means growers need to consider other management techniques including rotational changes. This is discussed for the first time in the Pocketbook.

The variation of agrochemical input as a result of this and multiple pest management programmes has led to a new section focusing in more depth on the agro-chemical input per crop. For the first time, the breakdown between agrochemical product types is detailed for each crop giving far more detail on how the figures are derived. This means the user of the gross margins can interpret the figures with more clarity and ease and vary them for their own circumstances.

The inroads that precision farming has been making in UK farming, chiefly in the arable sector, is leading to growers making different decisions regarding the allocation of their resources. Some considerable efficiency gains are possible with the right conditions and correct technology choices. This topic is covered in the Pocketbook with a discussion on what criteria are relevant when assessing the benefits.