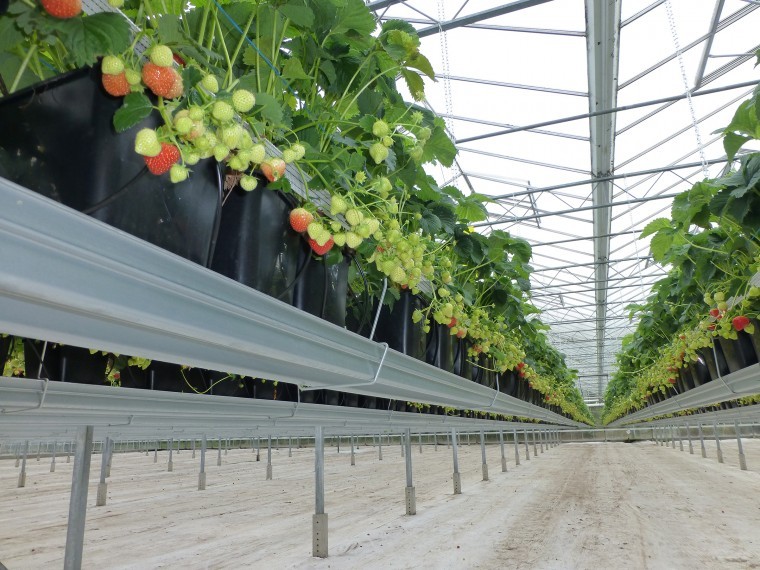 Under the same regime, the growers involved are maintaining or increasing marketable yields and improving produce quality. In trials at East Malling Research (EMR) in Kent, researchers have been trying to find the precise balance between applying too much and too little water to strawberry and other high value fruit crops. Growers often adopt an insurance approach to irrigation, but although this ensures good fruit size, the fruit can be soft which makes them more susceptible to bruising. “Eating quality can often be compromised as flavour compounds are diluted,” said Dr Mark Else from EMR. Conversely, if water availability is limited at critical times in the cropping season, there is a risk to the size and quality of the fruit.

So far, the research has shown that in scientific experiments, the average 45 litres of water used to produce a kilogram of fruit from field grown strawberry crops can be reduced to less than nine litres. The team has developed an automated “closed loop” precision irrigation system which triggers irrigation automatically so that an optimum moisture content around the plant roots is maintained, even in changeable weather conditions. The approaches and technologies developed by the researchers have been tested in small scale trials on commercial grower sites and have given water and fertiliser savings of up to 36%, increases in class one yields between five and 18% due to reduced waste, and improved fruit quality and flavour compared to the growers’ usual irrigation schedule.

Dr Else’s team has been investigating ways to help growers improve their water use efficiency, marketable yields and fruit quality over the last five years. Last month (September), he presented data from the research at a seminar called “Where next for the irrigation sector?” which was part of the European Union funded WATERR project reported in our front page article. “The challenge now is to show that these benefits can be delivered on a bigger commercial scale,” explained Dr Else. “We need to assure growers that the technology will operate reliably over many hectares of high value soft fruit production and so we are developing imaging systems to help to manage the perceived risks.”

This is where the advanced imaging will come into its own, allowing growers to monitor their crops in real time with data sent to an app on a smart ‘phone or via the web to a computer. The team are using thermal imaging to identify plants or groups of plants that are more prone to developing water stress under these low-input regimes. “It may be that the irrigation system is not uniform across the whole irrigation block,” said Dr Else. “Perhaps it is not operating properly on 15% of the area. This will reduce productivity and so digital imaging is being developed to identify areas where productivity is lower than expected. We’re also investigating whether hyperspectral imaging can provide non destructive measures of fruit quality before fruit are harvested.”

The water saving irrigation approach has also been tested with raspberry, apple, pear and sweet cherry crops, as well as potted herbs and poinsettia. The technology is not cheap, and so cost / benefit analyses are being carried out in commercial trials to help show the financial benefits to growers, producer organisations and retailers. “Growers will not necessarily have to buy individual systems,” said Dr Else. “Some of the larger Producer Organisations may be able to purchase a system for their growers to use, which could then be leased to other growers.”