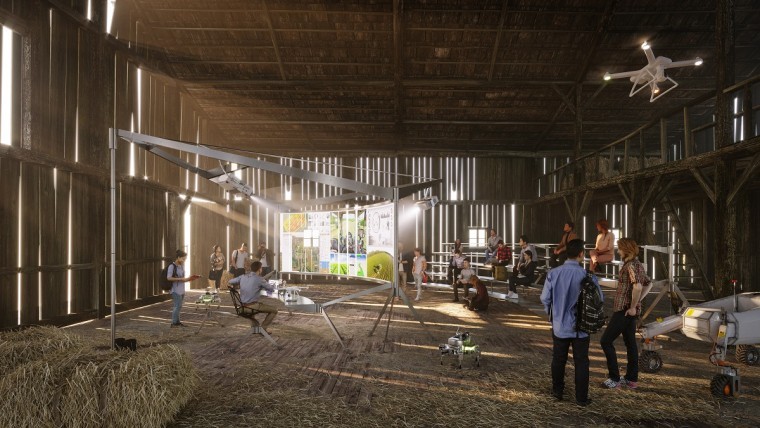 As part of its celebrations, the college has created an innovative Vision50 campaign to address the future of farming, particularly in terms of the digital technology that is needed to bring the farming world into modernity.

Mark Lumsdon-Taylor, deputy principal & CEO, at Hadlow, says: “Vision50 is an important move towards learning about the digitalisation of food production, plus drone and satellite technology. A key element of this move is Hadlow’s new prototype designed for agriculture and horticulture students. The device creates a simulation environment using gaming technology, giving the students an opportunity to learn about agriculture within a digital environment. This is pushing the envelope of learning in a digital age.”

As well as targeting young people interested in farming, the device, measuring an impressive 9m x 4m, is designed to encourage the current generation of young gamers to consider a career in farming. Mr. Lumsdon-Taylor explains: “Young people develop a variety of skills by playing computer games, so it seems pertinent that institutions such as Hadlow develop devices which attract this sizable market.”

The prototype is based on current computer game technology, whereby students will solve real-life farming scenarios within different situations, such as pesticide prevention. Students will also learn about business principles including profit and yield. The device will launch at this year’s Kent County Show in July, where Mr. Lumsdon-Taylor said the prototype will ‘rejuvenate romanticised notions on farming, injecting agriculture into contemporary society’. “It is an important move in the modernisation of UK and global farming responding to government and consumer need,” he added.

The prototype is an integral element of the larger Vision50 campaign, which commemorates Hadlow’s golden year but, more importantly, demonstrates how the college is the leading advocate for technological change in the farming world. As well as the prototype, Hadlow is making innovative advancements into hydroponics and has recently opened a new equine treadmill. Hadlow is cementing itself as an organisation driving for change, quickly becoming the pioneer in a new age of global farming.