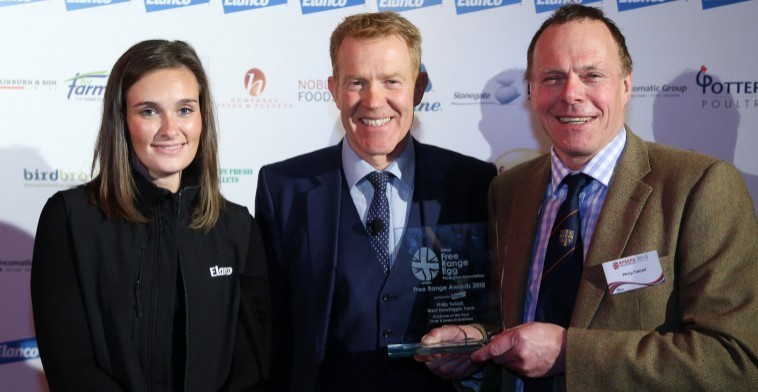 The awards, sponsored by Elanco and attended by more than 500 people, highlight excellence from companies and individuals who make sustained, positive contributions to the sector.

Clive and Liz Patrick from Thurlby Grange in Lincolnshire demonstrated what the judges called “an obsessive attention to detail in hen management” and claimed the prize for businesses established fewer than five years ago.

In the over five years category, Phil Twizell from Sadgberge in County Durham won the award for the development of The Good Egg Fellas – believed to be the first online sales channel for eggs direct from a farm.

And Freedom Food ambassador, Andrew Hall, from Wilton Gatehouse in Yorkshire was also praised for his attention to detail, winning the small producer of the year category.

Myles Thomas, chairman of BFREPA, said: “The British free range egg sector is in a great place, and that’s largely thanks to the work of the people involved in it. That starts with producers looking after the welfare of the hens, but carries on right through the supply chain to the packers and the retailers who look after and promote the product.

“There was a great deal of competition to win an award this year and that goes to show what a dynamic and forward-thinking sector we have developed.”

Marks & Spencer took home the retailer of the year prize after the company re-launched its free range, organic and specialty egg range in a blaze of publicity. As a result, M&S saw sales increase by 38.9% in value and 37% in volume.

LJ Fairburn was rewarded for its outstanding commitment to free range and organic production and was heralded as a role model to all aspiring businesses as to what can be achieved through drive and determination.

Noble Food’s Happy Egg Free Range Educational Tour won marketing initiative of the year after it took a tour bus to 40 county shows, meeting over 40,000 people, to help educate consumers about the sector.

Tesco’s feed tracker contract was announced as the breakthrough of the year for its role in insuring producers against price volatility in feed costs and fluctuating egg prices.

And finally, the lifetime achievement award was won by Roger Lythe who has worked in the sector for more than 60 years in a variety of roles. As recently as 2011 he set up the Yorkshire Egg Producers Discussion Group and continues to work three days a week at the age of 75.

Sophie Malkin from Elanco said: “All of the winners of the awards have demonstrated excellence in their fields and deserve the accolades afforded to them. Elanco is really proud to be part of such a innovative sector.”

Pictured: Adam Henson presenting the producer of the year award to Phil Twizell with Sophie Malkin from Elanco