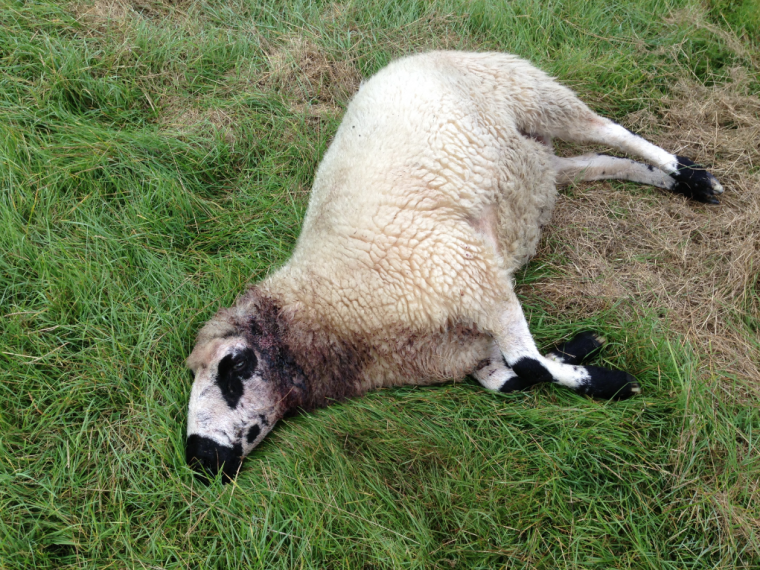 The flock of Pedigree Kerry Hill sheep, owned by Daryl Brown and Del Knowles from Sevenoaks, were discovered early on Saturday morning lying flat in the field with ears torn off and deep puncture and bite wounds to their face and legs.
The entire flock of Pedigree breeding ewes, and one ram, were badly injured with three mauled so severely that they had to be euthanised by the vet.

Home to the Wrotham Flock, Westlands Farm has two public footpaths running through it and has regular signs warning walkers to keep dogs on leads, with the business partners Daryl and Del never being afraid to ask walkers to keep their dogs under control.

Del Knowles, who succesfully shows the sheep throughout the South of England, said: “Just a week before we were winning prizes at the Royal Berkshire Show and this week three of our best breeding ewes are lying in a heap waiting for collection whilst the rest of our flock is being treated for serious head and leg injuries. Some of them might not make it and others may abort their lambs; this is going to have a lasting impact on our flock as we have lost years of breeding in one attack.”

The pair believe that the offending dog or dogs came from Potters Mede playing field which sits on the edge of the farm and is frequented by walkers who fail to keep their dogs on leads.

Sheep worrying has become a huge problem in the UK with the National Sheep Association’s (NSA) latest survey results showing 79% of respondents experiencing dog attacks on their farm in the last five years, with three farmers reporting over 200 attacks.
With the number of reported attacks in Kent rising to more than the whole of Northern Ireland, NFU Mutual have predicted the cost of sheep worrying to UK agriculture as more than £1.2 million a year.

However, Del Knowles, who has been left with a hefty vets bill following the attack says money is not the main issue – “The worst part; apart from the financial and emotional impact; is that {pull-quote}we do not know what happened or who is responsible. Someone will have witnessed their dog savage our sheep or found their dog return home covered in blood.”

Sheep worrying can cause serious damage to a flock even if the sheep is not physically attacked. The chase can cause sheep to panic and cause injury to themselves while the stress to pregnant ewes can cause them to miscarry unborn lambs. Dog attacks on lambs can result in the lamb becoming separated from its mother and eventually die from starvation or hypothermia.

Under the Dogs (Protection of Livestock) Act 1953, it is a criminal offence for a dog to attack, chase, cause stress or injury to or to be out of control around livestock on agricultural land with the dog owner absolutely liable for damages.
The most common cause of attacks on sheep was dogs not on leads or owners assuming their pet will not attack.

Farmers are entitled to shoot dogs worrying their flock, with 15% of dogs killed as a direct result, although the NSA say this should be a last resort.
The rest of the Wrotham Flock are still being treated for opens wounds and shock and it is unknown if the sheep will recover. Daryl and Del have displayed photographs of the attack around the area to warn pet owners of the dangers of allowing their dog to roam near livestock.

Daryl Brown said: “Having experienced a dog attack first hand we believe it is even more important to educate members of the public. Lots of dog owners do not realise what their dog is capable of and we urge everyone who takes dogs out into the countryside to keep them under control, especially around livestock. We want everyone to enjoy the countryside but members of the public need to realise that not only is it our place of work but that our livestock are our livelihood and passion”.

If anyone has any information about the attack which happened on Friday the 26th September, please contact Tonbridge Police.