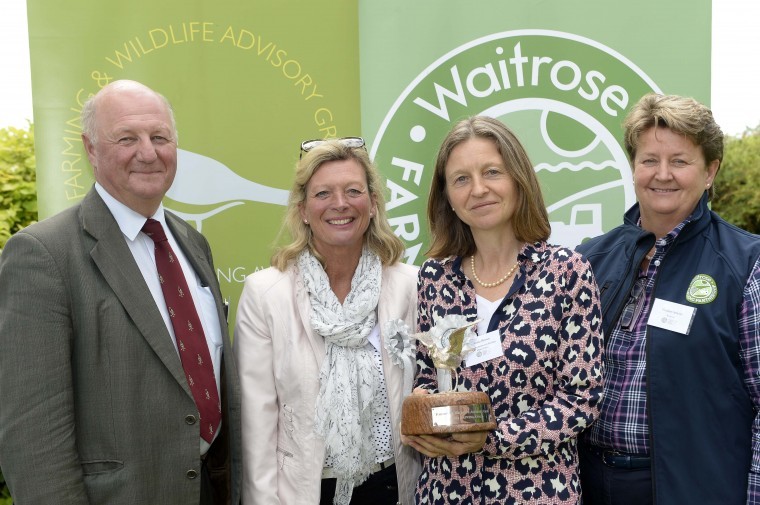 Mrs Brown runs Paythorne and Perching Manor Farms as one unit, and was chosen from a national short list of five farms, each selected for demonstrating outstanding commitment to good environmental practices alongside food production.

The 2015 FWAG award was presented to Mrs Brown by former agriculture minister Sir Jim Paice and Heather Jenkins, Waitrose director of buying and agriculture strategy, at a ceremony hosted by Ashley Cooper, the 2014 silver lapwing winner, at his farm in Gesingthorpe, Essex.

The farm extends to some 1,450 acres, of which two thirds is on the top of the South Downs, and the rest below on the weald. The Harris family have owned the farm for nearly 100 years, with Mrs Brown’s late father Brian Harris taking charge from the 1960s. During the 1970s and 1980s the farm was in very intensive arable production. But with the downturn in cereal prices in the 1990s and the introduction of environmentally sensitive areas (ESAs), much of the farm was put down to grass.

Nearly 20 years on, the ESA had influenced the decline in wildlife, especially downland birds. So with recommendations from the RSPB working with Natural England, the farm decided to enter the higher level stewardship scheme (HLS).
This would involve reintroducing arable cropping as well as wildlife feeding options to create a mosaic of varied habitats.

The vision was to farm a mixed system of stock and arable that would sustain the environment and the business and encourage wildlife back to the downland.

David Ellin, Mrs Brown’s farm manager, explained that the low input crop requires much reduced seed rates, nitrogen use and minimal pesticide applications. “For the last five seasons we haven’t used any herbicide or insecticide on the low input crops,” said Mr Ellin. “I feel that this is down to carefully planning the rotation of low input and commercial cereals with winter fodder crops and over winter stubble options. Our aim is to provide a year round habitat, especially for the downland birds and at the same time create an economically sustainable system.”

During the last year the farm has been looking at the “hungry gap” from about December to April, when conventional bird seed plots become depleted. “Last year we built a spreader and mixed about six tonnes of feed, wheat, rape, linseed, oats and a selection of other seeds, and spread three times a week on various sites to encourage birds to feed,” Mr Ellin explained. “The results were truly amazing!”

The farm is keen to try new wildlife features. For example, from this autumn – with help from the RSPB – a special seed mix is to be planted to try and encourage turtle doves, whose numbers fell by 77% in the UK between 1970 and 2001.
An integral part of the farming enterprise is the newly introduced 100 head single suckler herd. The Limousin cross Angus herd graze with about 600 sheep – which are in on keep – to provide a mixed stocking system, vital for managing the grassland without relying on sprays or fertilisers. The cows are calved in January and February which should allow stockman Tristan Driver to help with arable operations from March.

“Yields on our heavy weald clay of winter wheat have reached four tonnes an acre and both oilseed rape and winter beans perform well. The commercial crop and low input crop of malting barley will average just over two tonnes and acre together. Importantly for the business, when commodity prices are low, the environmental schemes do provide us with a useful buffer,” Mr Ellin added.

“Going that extra mile has paid off for us, and encouraging wildlife will sustain our farming in the long term.”