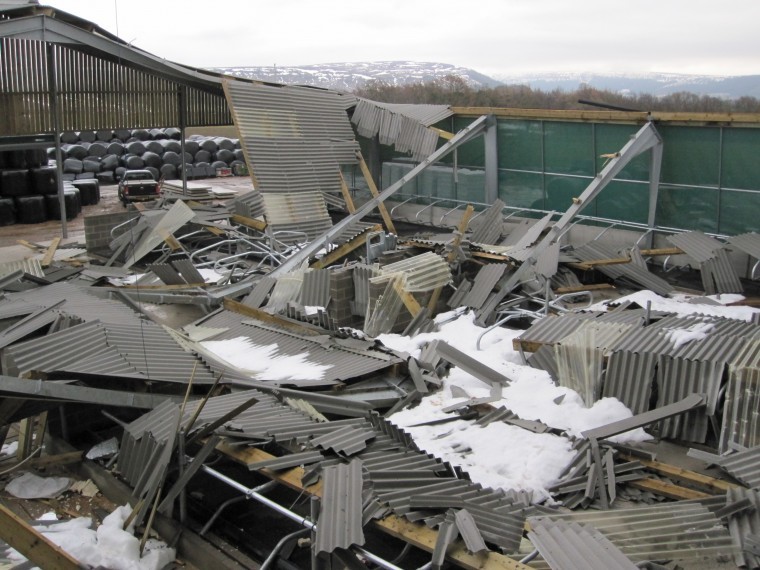 Following the recent spate of bad weather, the Rural and Industrial Design and Building Association (RIDBA) has warned farmers to ensure their buildings are fit for purpose from both a moral and legal perspective.

The moral perspective would be living with the knowledge that an agricultural building that was not fit for purpose could partially or wholly collapse and injure or kill people or livestock or damage machinery and crops.

The legal perspective is farmers now being criminally liable, under new regulations, for Health and Safety on their land. The implications for them and the manufacturer or supplier of a poorly designed agricultural building are immense.

It has been drawn to RIDBA’s attention that more and more farmers are asking frame manufacturers to use the steel frame of a new building at the same size as an existing building but mostly this will mean that the new building frame is under-designed.

Design loads on buildings are being increased to ensure the structure will remaining standing in the increasingly extreme weather conditions brought about by climate change that a few years ago would not have been thought possible.

A typical example of this extreme weather is the extreme quantity of rain that fell in Cumbria and the North West of England and parts of Scotland earlier this month and the extreme snow fall that caused so many buildings in the north of England and Scotland to collapse a few years ago.

RIDBA advises that designing to old standards is not only a false economy because of the risk of collapse but also poses serious issues under the Construction Design and Management (CDM) regulations which have recently put increasing responsibility on the “principle designer” and any other designer.

The CDM regulations state the client/farmer has a responsibility to appoint a principle designer and ensure that everyone appointed to work on the project has the necessary capabilities to carry out the tasks required of them.

If the client farmer sets the steel sizes it could be argued they are the principle designer so under the CDM regulations they have responsibilities to identify and eliminate or control foreseeable risks during and after construction … and collapse caused by wind or snow load is a foreseeable risk.

If the client farmer is not the principle designer then it will probably be the frame manufacturer and so they would have the above responsibilities. In fact, the frame manufacturer will always be A designer unless they receive the full design from a qualified structural engineer. Then their responsibilities will be when preparing or modifying designs, to eliminate, reduce or control foreseeable risks that may arise during construction, and maintenance and use of a building once it is built.

So in the event of a collapse, both the client and the frame manufacturer could, RIDBA believes, be investigated by the Health and Safety Executive, and in the unfortunate event that there is an injury, both could be held legally responsible.

Yet another important issue in current agricultural building is one of insurance. RIDBA is aware that insurance companies are now taking a greater interest in correct design as well as CE Marking, marked most recently by a case where an insurer declined to insure a new building because it is under-designed and not covered by a CE Mark.