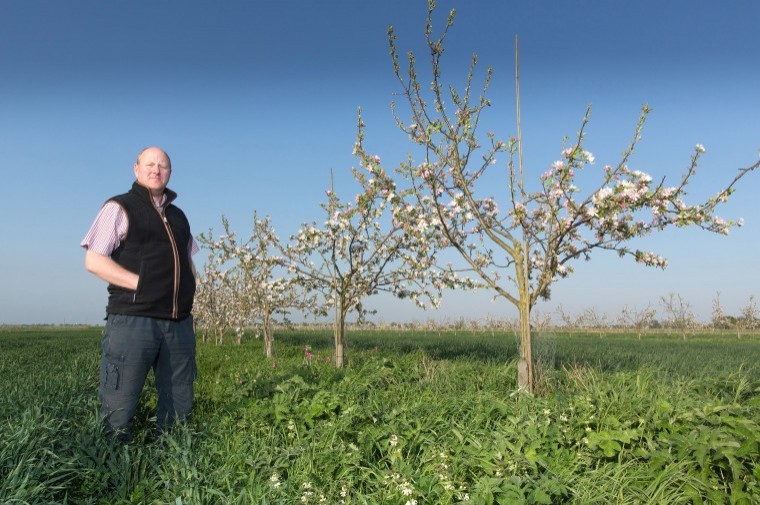 The UK loses 2.9 million tonnes of top soil a year through erosion. Soil degradation on farm land in England and Wales is costing agriculture around £200 million pounds a year.

Now the Woodland Trust is urging farmers to join them in discovering how trees can help conserve this finite but vital resource. The Trust wants to hear from farmers and landowners who are interested in incorporating trees onto farms; and in the process help increase their productivity, and gather evidence about the advantages trees offer.

Stephen Briggs farms in Cambridgeshire, where fertile fenland soils suffer from wind erosion. In 2009 he established 52ha of Agroforestry, integrating 4,500 apple trees with cereals in the same fields to act as wind breaks, and give him an extra cash crop.

For him it was an obvious choice: “The trees mean I farm upwards, as well as on the ground, so in effect I get two crops from the same field without them competing for space, light or nutrition. The apples are planted in single rows 24m apart with cereals grown in the alleys in-between, so there’s no problem with farm machinery. I combine the cereals in summer and then later in the autumn harvest apples. Everything works together, two crops from the same field and I’m reducing soil erosion.”

The apples, many of which are heritage varieties, are pressed and bottled as high quality juice.

Through alley cropping, tree roots stabilise the soil, bring up water and nutrients from below cereal roots, and leaf litter increases soil organic matter. Trees are under planted with wildflowers; pollinators thrive and there’s been a better predator and pest balance. For Stephen, a mix of perennial and annual crops is also a good risk management strategy against climate and market volatility.

Importantly, says Stephen, agricultural land planted as agroforestry retains its ‘agricultural status’ and in many cases is eligible for continued support under the CAP Basic Payment Scheme

Stephen, who studied soil science, is Soil & Water manager at Innovation for Agriculture, and is keen there’s proof that planting fruit trees amongst his cereals are boosting both returns and biodiversity. Data from Whitehall Farm is being gathered for a European study on soil erosion. And six years on, the yield and economic output of the trees is equal or greater than that of the cereal crop in the alley. Going forward, the trees will produce more, and he’s expecting his fields with fruit trees to show a bigger profit than fields with cereals alone.

Other research has shown that adding the output of arable and trees together, total productivity from silvoarable agroforestry systems is between 10 per cent and 40 per cent more productive than monoculture arable systems.

Through the Woodland Trust, Stephen has planted poplars as a field edge shelter belt. Shelterbelts modify the crop micro climate, reduce wind speeds and increase temperature so crops near shelter belts can use water more efficiently. Permeable shelter belts with a porosity of between 40-60 % can protect an area 30 times the height of a shelter belt.

In Nottinghamshire, Haywood Oaks Farm is also reaping the benefits of planting trees.

Situated on rolling hills and sandy soils, Haywood Oaks is one of 10 linked holdings forming Robert Thomas Farms. In the last decade, owner Richard Thomas and farm manager Andrew Bainbridge have incorporated trees as a way to combat wind and water erosion. Now Robert’s son James has returned home to help run the farm and continue with planting.

Before land management schemes were in place, it was common for strong winds to blow valuable top-soil away and for intense rainfall to wash the topsoil into neighbouring land and local communities.

Knowing that something more had to be done, Richard and Andrew began to make significant changes to their farming practices. After ploughing, fields are now pressed to compress the soil, nurse crops are planted amongst other crops and vegetables and 30km of hedgerows have been restored to provide protection. Field margins, grassy field corners and ridges have been incorporated to slow the flow of water.

Andrew commented: “There were instances where we could literally see the soil leaving the farm and once that happens, we’ve lost that forever. We knew we really needed to take steps to keep that in the field – we needed to slow the water so that we could ensure the sediment and nutrients stayed on the farm and that we weren’t impacting on other land, local people and properties.”

With the Woodland Trust’s help they identified under used areas of the farm, and in winter 2014/15 planted 4000 trees, with another 4,500 trees going in last winter; including shelter belts on linked holdings. Over time, the additional planting carried out by James and Andrew will show that, when planted in the right places, trees can significantly help to lessen soil erosion and the loss of vital nutrients.

Helen Chesshire, the Woodland Trust’s senior farming advisor said: “Our advisors have years of experience, we can provide subsidised trees, on-farm assessments and bespoke planting schemes. Get in contact or come and see us at Cereals 2016. To find out more about how we can help you to plant trees on your farm: call 0330 333 5303 or email plant@woodlandtrust.org.uk

This year the Trust has teamed up with the Soil Association’s Innovative Farmers who will be showcasing their farm based field labs on the Trust’s Cereals stand. A group of Wiltshire farmers, led by Adrian Hares is looking at methods of soil analysis, tillage and grassland management to improve soil biology. The Soil Association’s Tim Bevan and Astrid Barrowman will be on the stand to talk about field labs and the work they do.