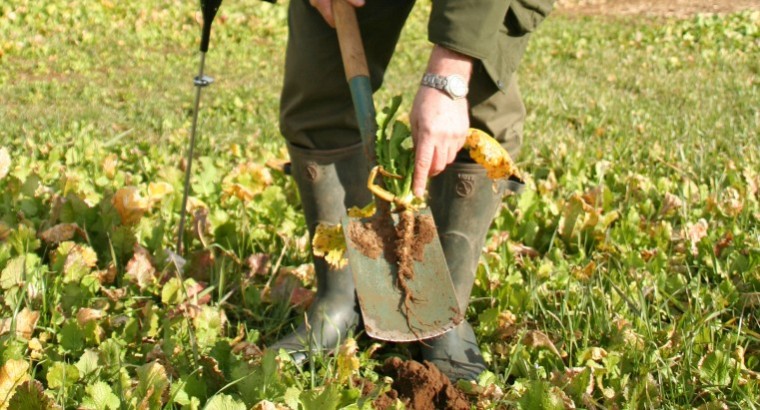 Catchment sensitive farming (CSF) and the Campaign for the Farmed Environment (CFE) gave an introduction to cover crops, including tips on how to establish and manage them and the environmental benefits that arise from growing them. Cover crops can count towards common agricultural policy greening measures including ecological focus areas (EFAs). These events featured input from Growhow, Kings and Agrii.

Farmers and their advisers saw a number of varieties of cover crops, from winter turnip rape and mustard to cereal rye, vetch and oil radish and all heard how these cover crops have established on different soil types. These ranged from shallow soils, such as Cotswold brash at just 30 centimetres, through to chalk and sand, and heavier soils down to 90 cms depth.

Tim Clarke, the CFE coordinator leading these trials in the South East, said:“Provided that cover crops are treated as a crop, they can deliver dividends, some of which we are only just beginning to understand and more data is needed. But we know the benefits include nutrient retention, improved soil health and tilth, greater infiltration of rainfall and they interact with blackgrass, so they could help us with weed control,” Mr Clarke explained.

The trials involved the establishment of cover crops from July 2014. The control was overwintered stubbles. Each crop variety was grown twice – one plot with no additional nitrogen and the second with an application of 40 kilograms of nitrogen.

“Performance of the different cover crop varieties varied on the differing soil types, but all grew best with additional nitrogen,” Mr Clarke continued. “We cannot conclude much at this stage as the demonstration plots were not replicated, but all the cover crops succeeded in catching useful amounts of nitrogen at an average of 60 kilograms of nitrogen a hectare on at least one of the five sites. In general, the more biomass a plant produces the more nitrogen it is likely to capture. This nitrogen is then returned to the soil when the cover crop is incorporated and it is made available to the next crop during the growing season.”

“On heavy soils, cover crops keep the soil in good condition over the winter and improve the conditions for drilling a spring crop. Some growers are growing cover crops as part of a no till system, using drills that cope easily with the residues. The residues protect the soil surface and pose no problems to the emerging spring crop. Cover crops are an inherent part of a new, regenerative approach to soil management.”

Mr Clarke continued: “The preliminary results suggest that benefits could arise from sowing cover crops within a rotation, following a crop of winter wheat and preceding a crop of spring barley. We believe we now need to run replicated trials over the next five years.

“The rate at which the nitrogen captured in the cover crop is made available to the following crops is dependent on many factors, not least whether the cover crop is green and leafy or brown and woody. The nitrogen in the green, leafy crop will be available quicker than that in the lignified cover crop. We need to do more work to learn how to manage cover crops so we get the availability that we want,” Mr Clarke concluded.