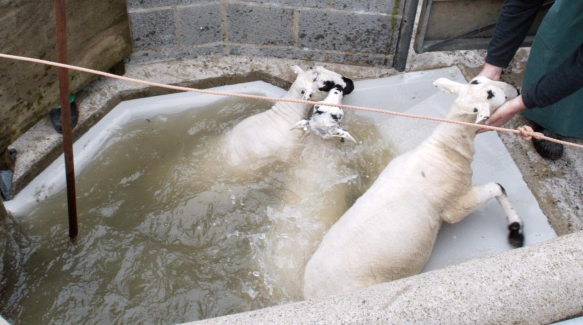 The chemicals were used to control sheep scab, but many farmers have argued for years that they have been made ill by dipping sheep with OPs.

Mr Casson hopes to establish a group of sheep farmers, farmers from other sectors and those exposed to OPs from different industries. The data will be added to information collected by others across the country and used to try to help sufferers.

Mr Casson is in contact with Tom Rigby, a dairy farmer from Lancashire who used to be the NFU’s county chairman. He has already organised one meeting with Andy Burnham, the Labour MP and shadow health secretary, which reviewed the science behind OP poisoning. Now Mr Rigby has organised another meeting with Mr Burnham at which sufferers will be invited to describe their experiences. The meeting is on 2 December in London. “I am active in the NFU, and they are keener on doing something than they were a while back,” Mr Rigby said. “I think we have made more progress in the last six months than we did in the previous six years.”

Mr Casson is working with his partner Jo Aldridge to set up the database. He runs between 700 and 800 sheep near Andover, mostly on tenanted land. He no longer uses OP chemicals, but does use a pour-on product called Crovect for most external parasites. In this, the active ingredient is cypermethrin, a synthetic pyrethroid.

“Medical practices do not seem to understand or acknowledge the fact that it would appear there is a big link between various illnesses and OP dips,” Mr Casson said. “We are not on a stampede about this but we want to establish how big the problem is.” From talking to sheep farmers or shepherds – particularly those in middle age or later – Mr Casson said some will have illnesses such as motor neurone disease, Parkinson’s disease, Alzheimer’s disease or dementia. “We are just trying to establish how many people out there may have suffered and whether or not there is a link to OPs. The illness may not have been explained satisfactorily to the patient or the diagnosis is unclear. Perhaps the symptoms do not match or they are not convinced they are suffering from the diagnosed illness.”

Mr Rigby said that he was particularly concerned about those who had been dipping in the late eighties and early nineties: compulsory dipping stopped in 1993. “It is a lot harder to get treatment and diagnosis than it should be,” he said. “There is no identifiable treatment for a condition which does not exist, so you cannot get it on the NHS.” Ironically, said Mr Rigby, the incidence of sheep scab was about 100 cases a year when compulsory dipping stopped. Today, there are between 3,000 and 5,000 cases a year.

Anyone who wants to contact Mr Casson should email address robincasson@aol.com